Laurel and Hardy Do Yemenite

Dance-Off! Laurel and Hardy are, in some sense, associated with dance. But as far as Abq Jew knows, they are not usually associated with the Yemenite tradition of dance. 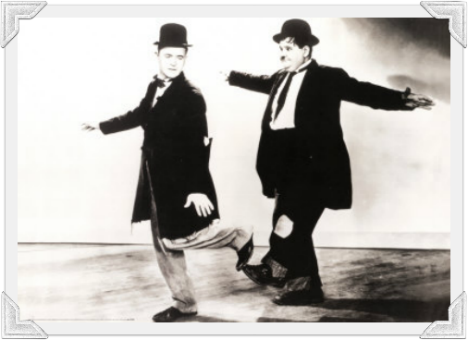 Yet change may be in order.

Social media, when not cracking up about Melania Trump's 2016 RNC "adaptation" of portions of Michelle Obama's 2008 DNC address, have promulgated a video of the famed duo viewing, with favor, a group of Yemenite dancers. And even joining in.

Which Abq Jew is only too happy to share with you, his loyal readers.


But first - a history lesson!

First of all - Laurel and Hardy.


Laurel and Hardy were a comedy double act during the early Classical Hollywood era of American cinema. The team was composed of thin Englishman Stan Laurel (1890–1965) and heavyset American Oliver Hardy (1892–1957).

They became well known during the late 1920s through the mid-1940s for their slapstick comedy, with Laurel playing the clumsy and childlike friend of the pompous Hardy.

The duo's signature tune is known variously as "The Cuckoo Song", "Ku-Ku", or "The Dance of the Cuckoos". It was played over the opening credits of their films and has become as emblematic of the duo as their bowler hats.


Yemenite Jews or Yemeni Jews (Hebrew: יהודי תימן‎‎ Yehudey Teman; Arabic: اليهود اليمنيين‎‎) are those Jews who live, or once lived, in Yemen. The term may also refer to the descendants of the Yemenite Jewish community.

Between June 1949 and September 1950, the overwhelming majority of Yemen's Jewish population was transported to Israel in Operation Magic Carpet. After several waves of persecution throughout Yemen, most Yemenite Jews now live in Israel, while small communities are found in the United States and elsewhere. Only a handful remain in Yemen. The few remaining Jews experience intense, and at times violent, anti-Semitism on a daily basis.

Yemenite Jews have a unique religious tradition that marks them out as separate from Ashkenazi, Sephardi and other Jewish groups. Yemenite Jews are generally described as belonging to "Mizrahi Jews", though they differ from the general trend of Mizrahi groups in Israel, which have undergone a process of total or partial assimilation to Sephardic culture and Sephardic liturgy.

The basic Yemenite step provides a swaying movement that changes the dancer's direction of motion, although the dancer may face forward throughout the step.

It is usually a sideways movement, but may be done moving backward and forward (or vice versa). It consists of three steps, with a short pause on the final step for a "quick, quick, slow" tempo.

Love it gives a new spin a little more interest. Who knew they could dance so gracefully!