Modigliani Stonehenge McGarrigle: If you haven't noticed, it is Open Season for Health Plans. Mr & Mrs Abq Jew, along with most of America, are under more than just a bit of stress.


Which brings us to Modigliani. The New York Times has covered some important Art & Design, and, usually separately, Sports news over the years.

So Abq Jew was especially pleased when a recent Sports event - an auction at Christie's - was covered in the Arts section. He refers, of course to

In an overheated art market where anything seems possible, a painting of an outstretched nude woman by the early-20th-century artist Amedeo Modigliani sold on Monday night for $170.4 million with fees to Liu Yiqian, a former taxi driver turned billionaire art collector, in a packed sales room at Christie’s.

It was the second-highest price paid for an artwork at auction.

The painting became the 10th work of art to reach nine figures under the hammer. The bidding was palpably tense, with six people vying for the lot, and it took nine minutes to sell, with the winning bid coming from the phone.

Mr. Liu, who with his wife Wang Wei is among China’s most visible art collectors, confirmed on Tuesday that he is the buyer. He said he planned to bring the work back to Shanghai, where he and his wife have two private museums.

To which Abq Jew can only say


Mr Liu must have been a really good taxi driver.


As a teenager growing up in Shanghai during the tumultuous years of the Cultural Revolution, Mr. Liu sold handbags on the street and later worked as a taxi driver.

After dropping out of middle school, he went on to ride the wave of China’s economic opening and reform, making a fortune through stock trading in real estate and pharmaceuticals in the 1980s and 1990s.

According to the 2015 Bloomberg Billionaires Index, Mr. Liu is worth at least $1.5 billion.

And for a short and Jewish bio of Modigliani, Abq Jew turns (as he almost always does) to Wikipedia:

Amedeo Clemente Modigliani (12 July 1884 – 24 January 1920) was an Italian painter and sculptor who worked mainly in France.

He is known for portraits and nudes in a modern style characterized by elongation of faces and figures, that were not received well during his lifetime, but later found acceptance.


Modigliani was born into a Sephardic Jewish family in Livorno, Italy.

A port city, Livorno had long served as a refuge for those persecuted for their religion, and was home to a large Jewish community. His maternal great-great-grandfather, Solomon Garsin, had immigrated to Livorno in the 18th century as a refugee.

Modigliani's mother (Eugénie Garsin), who was born and grew up in Marseille, was descended from an intellectual, scholarly family of Sephardic descent, generations of whom had resided along the Mediterranean coastline.

Her ancestors were learned people, fluent in many languages, known authorities on sacred Jewish texts, and founders of a school of Talmudic studies. Family legend traced the Garsins' lineage to the 17th-century Dutch philosopher Baruch Spinoza.

Modigliani’s father, Flaminio, hailed from a family of successful businessmen and entrepreneurs.

How much, Abq Jew hears you ask, have other paintings sold for at auction?
The New York Times has a delightful interactive article about, that, too!
Here are a few highlights.


And that's not even counting Gustav Klimt's "Lady in Gold" (see Adele in Gold). 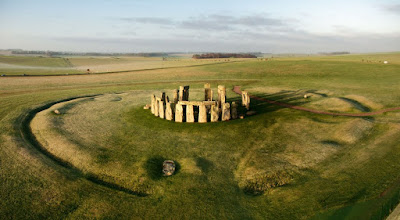 Which brings us, naturally, to Stonehenge. The New York Times has a great article about Stonehenge and Woodhenge, The Cursus and The Avenue.


Stonehenge Begins to Yield Its Secrets

AMESBURY, England — About 6,300 years ago, a tree here toppled over.

For the ancients in this part of southern England, it created a prime real estate opportunity — next to a spring and near attractive hunting grounds.

According to David Jacques, an archaeologist at the University of Buckingham, mud was pressed into the pulled-up roots, turning them into a wall. Nearby, a post was inserted into a hole, and that may have held up a roof of reeds or animal skin.

It was, he said, a house, one of the earliest in England.

Last month, in the latest excavation at a site known as Blick Mead, Mr. Jacques and his team dug a trench 40 feet long, 23 feet wide and 5 feet deep, examining this structure and its surroundings.

They found a hearth with chunks of heat-cracked flint, pieces of bone, flakes of flint used for arrowheads and cutting tools, and ocher pods that may have been used as a pigment.

About a mile away is Stonehenge.

It turns out (Abq Jew is paraphrasing here) that Stonehenge started out as a breakaway (you should pardon the pun) minyan.

And that there are plenty of other henges around. Says The Times:


The defining characteristic of a henge is not the rocks or timbers sticking upward, but a circular ditch surrounded by a raised bank. In this sense, Stonehenge today is not a true henge; its raised bank is inside the ditch.

Who knew? And that there's a whole community of sacred structures - one for Orthodox Druids, one for Conservative, one for Reform.


And one that no one ever entered.
Even on the Solstices and Equinoxes. Which brings us to Rue Sainte-Catherine. The New York Times has a great 2010 article about The McGarrigles - who performed the song Complainte Pour Ste Catherine - published after Kate died (much too young) in that year.

Abq Jew has always loved this song, mostly - take note! - because of the bright accordion riffs and happy, jaunty beat. And has Abq Jew mentioned that he doesn't speak (or read, or sing, or in any other way comprehend) French?

But that's OK. Here are the original French lyrics, and here are the lyrics translated.

The song begins with


Me, I walk along Ste Catherine
Getting the warmth from the Métro
I don’t look through shop windows
When it’s thirty below zero
We’ve been in politics for a long time

and has a bunch of in-jokes and hard-to interpret lines in between.

The song just makes Abq Jew feel good. And he hopes it will do the same for you.