This presents a terrible dilemma for Abq Jew.


For whom to root?


On one hand, there is Head Coach David Blatt of the Cleveland Cavaliers. Wikipedia tells us:

And even more importantly:


Blatt grew up in Framingham, Massachusetts, and is Jewish. As a boy, he went to a Reform temple, and until his bar mitzvah he attended Hebrew school twice a week. He says that in Israel he became "much more Jewish and much more Zionist."

In his sophomore year at Princeton, a coach for an Israeli kibbutz team recruited him to play in Israel for the summer. The summer at Kibbutz Gan Shmuel turned out to be a life-changing experience. Blatt graduated from Princeton in 1981 with a B.A. in English Literature, completing his senior thesis on Bernard Malamud, author of The Natural.

In 1981, he immigrated to Israel, and he served in the Israel Defense Forces on the Schneller military base, which he views as one of his greatest bonding experiences with Israel.

In 1991, Blatt married Kinneret, from Netanya, Israel; she had played on an Israeli professional basketball team that he coached.

They have four children: twin daughters Shani and Adi (who have served in the Israeli army), daughter Ela (his youngest child), and son Tamir (born in 1997; in 2014, he was the starting point guard on the Israeli junior national basketball team, and had signed to play for four years with Hapoel Tel Aviv).

Although he has not visited in many years, and has not personally observed the transformation of the country, Abq Jew retains strong ties to the Land of Israel.


On the other hand, Abq Jew fondly recalls attending many a San Francisco Warriors game in the 1960's with his father. Al Attles was then the Warriors' point guard.

William C Rhoden has just published Al Attles, a Warrior for Life, Is a Bridge to a Lone Bay Area Title in The New York Times. Mr Rhodes says of the 78-year-old Mr Attles:


Attles was the head coach of the Warriors when on May 25, 40 years ago, they completed a stunning four-game sweep of the powerhouse Washington Bullets to win the franchise’s only title in its more than 50 years in the Bay Area.

“Nobody expected much of us and felt that we were just lucky to even reach the finals,” Attles recalled. But his players, he said, “never believed” the low estimations others had of them.

“They couldn’t wait to get on the floor, then one day we looked up and we had won the championship,” Attles said. 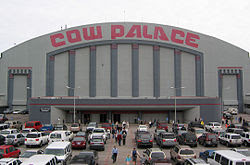 The Warriors played most of their home games at the Cow Palaace in Daly City.

In what many consider the biggest upset in the history of the NBA, the Warriors defeated the heavily favored Washington Bullets in a four-game sweep.

That team was coached by former Warrior Al Attles, and led on the court by Rick Barry, Jamaal Wilkes and Phil Smith.

So little was felt of the team's chances in the playoffs, even by their home fans, that the Coliseum Arena scheduled other events during the dates of the NBA playoffs.

As a result, the Warriors did not play their championship series playoff games in Oakland; rather, they played at the Cow Palace in Daly City.

The idea for the arena was originally conceived as the result of the popularity of the livestock pavilion at the 1915 Panama-Pacific International Exposition.

Newspaper records show that the name "Cow Palace" was used as early as May 1935.

One story for how the current name came about tells of a newspaper editorial that asked "Why, when people are starving, should money be spent on a "palace for cows?" Thus, the Cow Palace was born.

The Cow Palace has been used for many concerts (The Beatles, The Who, The Rolling Stones); sports events (basketball, ice hockey, Roller Derby); rodeos and livestock expositions; and (twice!) the Republican National Convention. 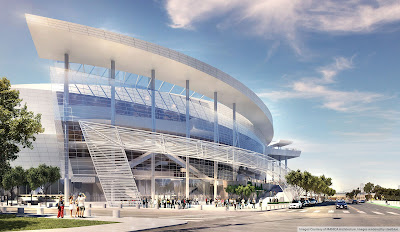 The Times They Are A-Changin'

The NBA reports with ethical swagger that the Warriors have decided to build a new facility in the City By The Bay.


Why has the team decided to build a new facility in San Francisco?
We believe a spectacular, centrally located sports and entertainment center, located near myriad transportation options in San Francisco, will best serve the organization, the fans and the entire Bay Area.

Where will the new arena be located?
The new Warriors Sports and Entertainment Center will be built in Mission Bay on 12 acres of private, inland property, bounded by 3rd, 16th and South Streets, and Terry Francois Blvd.

How will the new arena be financed? Will this cost taxpayers anything?
The arena will be entirely privately financed and built on private land – virtually unprecedented among major league sports and entertainment facilities in the U.S. Unlike virtually every other arena or stadium project in the country, there will be no public subsidy.

When will the groundbreaking take place?
A specific groundbreaking date has not been set, but the organization is still targeting the 2018-19 season for opening its new arena.

Game 1 of the NBA Finals tips Thursday June 4 at 7:00 pm New Mexico Time on ABC. Abq Jew plans to be at the NHCC, watching Havana Curveball and Jubanos. 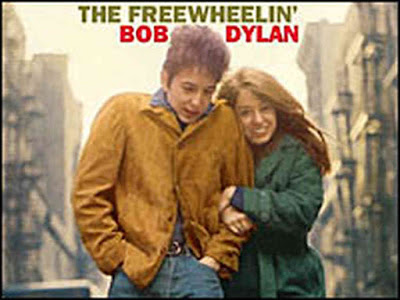 Which brings us to The Freewheelin' Bob Dylan, the second studio album by Bob Dylan, which Columbia Records released on May 27, 1963.


Fifty-two years and two days ago.

Eleven of the thirteen songs on the album are Dylan's original compositions.

The album opens with "Blowin' in the Wind", which became an anthem of the 1960s, and an international hit for folk trio Peter, Paul & Mary soon after the release of Freewheelin‍ '​.

The album featured several other songs which came to be regarded as amongst Dylan's best compositions and classics of the 1960s folk scene: "Girl from the North Country", "Masters of War", "A Hard Rain's a-Gonna Fall" and "Don't Think Twice, It's All Right".

Which brings us to The Times They Are a-Changin', the song of our final destination, which Columbia released as the title track of Mr Dylan's third album on January 13, 1964.

We learn from Wikipedia:


Dylan wrote the song as a deliberate attempt to create an anthem of change for the time ....

Ever since its release the song has been very influential to people's views on society, with critics noting the general yet universal lyrics as contributing to the song's everlasting message of change.

Here is the (in Abq Jew's view, seminal) cover by Peter, Paul and Mary.