What is A-WA? Three letters that you may not know how to pronounce (for now). Three sisters whose sweeping and uncompromising creation will take you on an exciting journey. 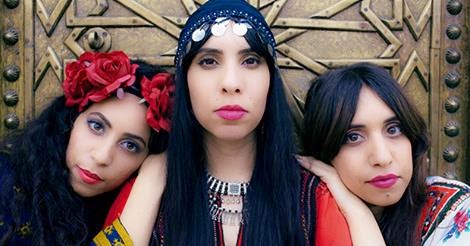 So says the A-WA website. Abq Jew first learned about A-WA from this March 23 article (by the aptly-named Avishay Artsy) in Jewniverse.

On March 8, a music video uploaded to YouTube flew from the Israeli desert to Yemen and through the Middle East. Its three stars, sisters Tair, Liron and Tagel Haim (not to be confused with L.A.’s three-sister rock band Haim) became immediate celebrities.

Their first video, Habib Galbi, which was viewed over 500,000 times around the world in the two weeks since its release, layers beautiful Yemenite melodies over irresistible hip-hop beats, creating a fast-paced, danceable fusion of Middle Eastern musical traditions.


To tell the story of A-WA, we have to go a few years back, to a family who lives in the small village 'Shaharut' in southern Israel. Not too far from the Egyptian border. In beautiful prairie landscapes with magical desert sunsets, Tair, Liron and Tagel grew up - three sisters (out of six siblings) to the Haim family.

As a gift from God, all members of the Haim family are blessed with musical talent. All three sisters studied music, sang, danced and performed together and separately since a very young age. In their childhood home they listened to many different kinds of music, such as Greek music, Yemenite music, Jazz, R&B, Hip Hop, Reggae, Progressive rock and more. The inspirations that sustained them, and the warm musical home that encouraged them, have become the creative part and parcel of their lives.

A few years later, after Tair and Liron completed their studies in music and design, and before Tagel started college, they hooked up again at their parents' house. They worked in the days, and at night they would meet up and record materials in English, Hebrew and Yemenite, which always had a special place in their hearts. They filmed and uploaded their videos to YouTube.

The rest, as they say, is history. Or, as we Jews say, History.