New Mexico's Rabbi: As you may recall from Lost Jewish Tribe Discovered and other seminal Abq Jew blog posts, there are just about twenty-four (24) ordained rabbis who currently reside in the Land of Enchantment.

Of those rabbis who bless our state with their presence, one and only one has been recognized by the Jewish Daily Forward as one of America's Most Inspiring Rabbis.

When it comes to Hebrew chant, no one can beat Rabbi Shefa Gold.

Chant is a path for all of us who lead with our hearts, who are determined to seek out the truth that is buried deep beneath the ground of our lives, and who have made a commitment to live that truth, from moment to moment, breath to breath, ‘one little bit at a time.’

In the March 27 issue, Forward Editor Jane Eisner said of the entire group of 33 Men and Women Who Move Us:

These stories of inspiring rabbis could not come at a better time. In the few short months since the dawn of 2015, the Jewish world has been stunned by terror, torn apart by partisan bickering, confronted with resurgent anti-Semitism in some communities and a seeping apathy in others.

Read these stories, and that troubling present melts in the face of genuine spiritual leadership and grace. Thanks to hundreds of nominations by our readers, we’ve identified 33 of the most inspiring men and women from North America who are defining and redefining what it means to be a rabbi in the 21st century.

The Forward cited Shelley Goldberg's words in their appreciation of Rabbi Shefa's work:

I completed a two-year chant leadership program called Kol Zimra with Rabbi Shefa Gold in Albuquerque, New Mexico. Her unique style allowed me to connect with Hashem (God) and the divine essence within myself.

Through repetition of sacred text, chanting took me to a place where I could reframe and recontextualize my life’s experiences so as to live a more balanced and rich life. Rabbi Gold’s ability to treat each student as an individual and want the best for them is a rare gift.

Thanks to her, I have made chanting an ongoing part of my daily life and have shared it with others.

I am a rabbi living in Jemez Springs. I have recently been named one of the 33 most inspiring rabbis in America by The Jewish Forward. I teach all over the world. I'll be teaching a meditation retreat this summer in Jemez Springs and would like NM Jews to know about this.

Abq Jew did take note of this note; he immediately thought, "That's nice." But it was Pesach, and the news got lost in the Pesachdik sauce. But as we say,

So here is some information about Rabbi Shefa's Ecstatic Meditation Retreat. 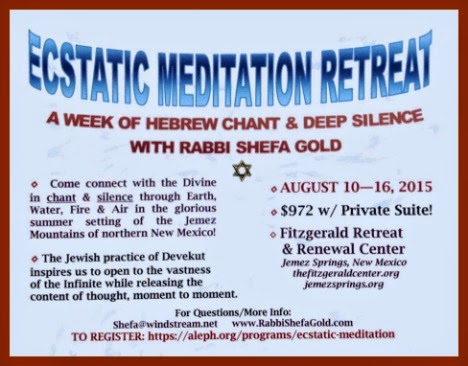 The essence of faith is an awareness of the vastness of Infinity.   — Rabbi Abraham Isaac Kook

The Jewish practice of Devekut inspires us to open to the vastness of the Infinite, while releasing the content of thought, moment to moment. During this week of chant and silence we will connect to the Divine through the Earth, Water, Fire and Air in the glorious setting of the Jemez Mountains.

The retreat will take place at the Fitzgerald Center in beautiful Jemez Springs, New Mexico. Easily accessible from both Albuquerque and Santa Fe. All participants will enjoy private accommodations.