Grasshoppers In Our Eyes

For Parshat Shelach Lekha (Yo, Get Outta Here): Two years ago it was moths (see Learning Hebrew in the Time of Mothra). This year, Burquenos, we have myriads (see Myra Myra) of flying grasshoppers, attacking us singly and in swarms, day and night, wherever we go and whatever we do.


The sight - indeed, the very thought - of grasshoppers, of course, brings to what is left of Abq Jew's mind their mention in this week's parsha. Shelach Leckha, it turns out, has some interesting things to say about the relative size of grasshoppers.

The land, through which we have passed to spy it out, is a land that eateth up the inhabitants thereof; and all the people that we saw in it are men of great stature.


Who is big, and who is small? Jay Stanton New offers this commentary. Mr New speaks specifically in reference to the LGBTQ community - but his words, Abq Jew is sure, will resonate with all of us.


These words offer a snapshot into human nature. When hearing that a task is difficult, how often do we respond to a challenge by convincing ourselves we are inadequate to the task ahead? This portion plays on universal tendencies to underestimate ourselves and let our worries overtake our reason. It is all too easy to see the courage of Caleb, and yet to identify with the concerns of the ten scouts.

The scouts go on to say that they “must have looked” like grasshoppers to the Anakites. This step in their logic seems based solely on projection – the kind of imagination that produces monsters under the bed. As humans, we are not blessed with the ability to read minds. We can anticipate, after much practice, the actions of people we know, but we cannot know exactly what is going through their heads. All the more so, we cannot know what goes through the heads of people with whom we have never interacted.

Presumptuous and counterproductive, assuming the thoughts of another is rarely fruitful. Instead, it tends to reduce the imaginer to a childlike state. Lawrence Kushner, in the book Five Cities of Refuge, recounts a teaching of the Kotzker Rebbe:

Menahem Mendl Morgenstern of Kotzk says that it’s all right to say you feel like a grasshopper in your own eyes – that means you’re alert – but when you start guessing what you look like to someone else, you’ve given them permission to define you, so you’re still a child. For this reason, Caleb, who refuses to let anyone else define him, is a man and, along with Joshua, was one of only two men of the wilderness generation to live to enter the Promised Land.

Abq Jew must disagree with the first part of the Kotzker Rebbe's statement. With all due respect


It’s not all right to say you feel like a grasshopper in your own eyes. Unless it's this grasshopper.


But as for the second part of the Kotzker Rebbe's statement (and the thrust of Mr New's commentary), about guessing what others think of you - Abq Jew firmly believes that 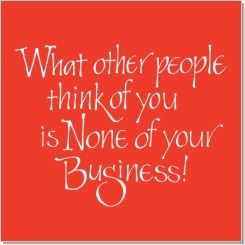