Jews & Jazz: There is a strong connection, in the United States (of course) - but also, Abq Jew is happy to say, in Israel. And ... Canada! 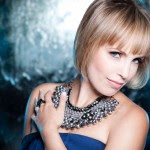 
is a Russian-born jazz vocalist who lives in Canada. After emigrating from Russia in the early 1990s, Milman, who is Jewish, spent most of her childhood years in Israel where she listened extensively to jazz.

Her self-titled debut album was released on October 12, 2004, in Canada via Linus Entertainment and in 2006 in the United States on Koch.

Milman is a student of commerce at the University of Toronto.

And there's Gergedan, about whom Abq Jew knows virtually nothing. Back in June and February, Abq Jew wrote:


And there's Gergedan (Turkish for rhinoceros), a creative entity of unknown origin, derivation, or any form of address that seems to have produced a series of artistically stunning music videos.

Do you know Gergedan?  Inquiring minds (and minds like Abq Jew's) want to know! In the meantime, visit GergedanFilKedi's YouTube channel!

Anyway - here, for your Shabbat enjoyment, is Sophie Milman, in a video by Gergedan: