And One For Sabeel:  In case you hadn't heard, President Obama's campaign last month released a list of 613 Rabbis For Obama. Max Slutsky, the campaign's Jewish Outreach Coordinator, wrote: 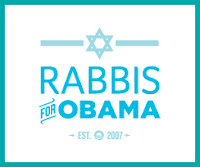 This group of over 613 rabbis - more than double the number when Rabbis for Obama launched in 2008 – from across the country and across all Jewish denominations recognize that the President has been and will continue to be an advocate and ally on issues important to the American Jewish community.


Not to be outdone, the Republican Jewish Coalition responded with its own ad: 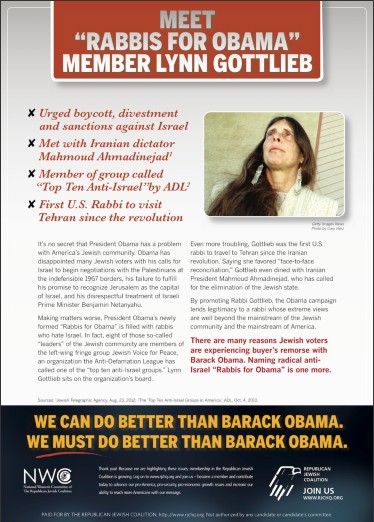 
Lynn Gottlieb, a rabbi in the Jewish Renewal movement, was among 600 people touted by the Obama campaign as “Rabbis for Obama.” That list includes eight members of the left-wing fringe group Jewish Voice for Peace, which the Anti-Defamation League has named one of the “top ten anti-Israel groups.” Lynn Gottlieb sits on the board of that group. She was also the first U.S. rabbi to travel to Tehran since the Iranian revolution and has dined with Iranian President Mahmoud Ahmadinejad.

Abq Jew considers the RJC's focus on one radical rabbi a cheap shot; his support for Barack Obama and the Democratic ticket remains steady. But let's talk.

As it turns out, Abq Jew and Rabbi Lynn Gottlieb are connected - we both were seeking rabbinical ordination from the Jewish Theological Seminary at the same time, that time being the late 1970s. That was way before Amy Eilberg became the first woman ordained by JTS on May 12, 1985.

Back then, Rabbi Gottlieb was primarily known for her work with the Jewish deaf - helping to bring that community into the Jewish mainstream. After obtaining private ordination (not as uncommon as it sounds), she moved to New Mexico. Rabbi Gottlieb became the founding rabbi (later emeritus) of Congregation Nahalat Shalom.

And it was at Nahalat Shalom - an open, warm, and welcoming congregation - that Abq Jew first encountered Sabeel. That was in June, when Abq Jew attended Mati Milstein's book signing and lecture, prior to Mr Milstein's photography exhibit in Santa Fe.

Abq Jew does not (he doesn't think) shock easily. But the ... slickness ... of Sabeel's anti-Israel marketing literature caught him off guard. Even more shocking was the fact that this propaganda - for that is what it was - was made available in a synagogue.

Who or what is Sabeel? Abq Jew hears you ask. According to Sabeel's website:


Sabeel is an international peace movement initiated by Palestinian Christians in the Holy Land, who seek a just peace based on two states - Palestine and Israel - as defined by international law and existing United Nations resolutions.

Sounds reasonable, doesn't it? In an emailed announcement of Sabeel's Conference on Justice, Peace, and Human Rights in Palestine & Israel - held in September, right here in  Albuquerque - Nahalat Shalom stated:


The event will feature internationally known activists, intellectuals, and spiritual leaders from around the world. Speakers will include: Rev. Naim Ateek, Palestinian founder of Sabeel. Sabeel is a grassroots, international, ecumenical peace movement founded by Christian Palestinians in Jerusalem.  Their vision is to create a just peace based on spiritual, moral and legal principles, including international law.  Among the Jewish speakers are Jeff Halper, founder of the Israeli Committee against House Demolitions; Miko Peled, author of "The General's Son" whose father was a general in the 1967 Six Day War; Rabbi Lynn Gottlieb, rabbi emeritus of Congregation Nahalat Shalom; and Mark Braverman.

A recent article in the Albuquerque Journal (Sabeel Meeting Draws Jewish Opposition) pointed out the anti-Israel tone of Sabeel's message - and why many leaders of the New Mexico Jewish community take issue with Sabeel's approach:


“The Sabeel movement is deeply offensive to the mainstream Jewish community because it undermines the right of the Jewish state to exist,” said Sam Sokolove, executive director of the Jewish Federation of New Mexico.

Janice Hart, a conference organizer, said the actions of Sokolove and others are an attempt to undermine the conference by pressuring church leaders to withdraw their support.

Jewish leaders “are expressing their viewpoint, and we want to express ours without this kind of harassment,” Hart said.

Friends of Sabeel calls for the withdrawal of Israel from Gaza and the West Bank, including East Jerusalem, and says Palestinians should be allowed to form a sovereign state, according to the group’s website. Sabeel also calls for divestment in Israel, the website says.

Sokolove said he and others met with the New Mexico Council of Churches earlier this year and convinced the ecumenical group to withdraw its support for the conference. They have also tried unsuccessfully to convince a Roman Catholic priest, the Rev. Richard Alona, to withdraw his support, Sokolove said. Alona could not be reached for comment.

Friends of Sabeel North America [FOSNA} is the U.S. and Canadian chapter of Sabeel, a Jerusalem-based group formed by Palestinian Christians. The group [had] scheduled an international conference ... at Immanuel Presbyterian Church in Albuquerque.

Organizers last year contracted with Cathedral Church of St. John to hold the conference at the Episcopal church in Albuquerque. But St. John leaders decided in February to cancel the contract and refund a $1,000 payment after meeting with Rabbi Arthur Flicker, who leads Congregation B’nai Israel of Albuquerque.

The Rev. Mark Goodman, dean of the Cathedral of St. John, said he and other church leaders decided to cancel after the brief meeting with Flicker.

“He was very calm, very cool, no heated rhetoric,” Goodman said. Afterward, St. John leaders decided they “felt increasingly uncomfortable with what they perceived to be a very one-sided approach of Sabeel,” Goodman said.

Flicker said this week that, during the meeting, he urged St. John leaders to read an online document, Kairos Palestine, which he said contains “hateful language” about Israel.

An even more recent guest column in the Albuquerque Journal (FOSNA Philosophy Just Anti-Semitism) - co-authored by Mr Sokolove and by Todd Goldblum of the Israel Action Network - raises the question: Are the political positions endorsed by Friends of Sabeel North America no more than anti-Semitism?

As the Sept. 15 Albuquerque Journal article detailed, Friends of Sabeel in North America will be holding a “Justice & Peace in Palestine and Israel” conference in Albuquerque later this month. What the article failed to convey, however, is that while Sabeel hides behind a language of peace and reconciliation, FOSNA – listed by the Anti-Defamation League as one of “The Top Ten Anti-Israel Groups in America” – actively promotes a rejection of Israel as a Jewish state.

An integral part of the global anti-Israel Boycott, Sanctions and Divestment movement, Sabeel promotes the idea that Zionism is based on a false reading of the Bible and that it stands for injustice and in opposition to God.

In addition, Sabeel often compares the Palestinians to the crucified Jesus, and Israel to his murderers, alluding to the ugly deicide charge against all the Jewish people. Examples include referring to Israeli actions with deicide language such as “The Israeli government crucifixion system is operating daily” or “Israel has placed a large boulder, similar to the stone placed on the entrance of Jesus’ tomb. This boulder has shut in the Palestinians.”

Amy-Jill Levine, a professor of New Testament and Jewish Studies at Vanderbilt University Divinity School, has called such Sabeel statements “recycled anti-Judaism that depicts Israel as a country of Christ killers.”

Sabeel conferences are notorious for featuring speakers who vilify Israel and routinely lift the voices of anti-Zionist Jews as a means to disingenuously suggest that they bring Christians, Jews and Muslims to the table. They continually reject almost all mainstream Jewish voices, including progressive or dovish Zionists.

When the Jewish Federation of New Mexico and Jewish clergy first became aware of the FOSNA conference last summer, we also learned that friends in the interfaith community had been approached to serve as conference sponsors. Given the positive history of interfaith relations between Christians and Jews in Albuquerque, it was our responsibility to offer a mainstream Jewish perspective on this conference.

As a result, it was heartening to garner the support of friends like the New Mexico Conference of Churches and Episcopal Cathedral Church of St. John who distanced themselves from FOSNA in demonstration of sensitivity to Jewish community concerns and civic discourse.

Characterizing these conversations as “bullying” and “harassment” is profoundly incorrect, but an expected part of the BDS campaign. We are confident that other church representatives who have lent their endorsement to the Sabeel conference will come to recognize the one-sided, inflammatory and destructive nature of the movement.

To be sure, the Jewish community of New Mexico is in no way monolithic, and many of us often vocally criticize the policies of Israel’s government. However, the overwhelming majority of Jews in New Mexico and around the globe recognize Israel as a miraculous return of our homeland after a 3,500-year exile, and a vibrant, if young and imperfect, democracy for people of all religions within a region surrounded by intolerance and brutal dictatorships that conspicuously escape Sabeel and BDS scorn.

The conflict in the Middle East is about finding a peaceful path to establish two states for two peoples, not about preventing a group from exercising its right to self-determination.

There are appropriate and meaningful forums for interfaith discussion on all issues pertaining to the Israeli-Palestinian conflict that engender dialogue and increased understanding. Sadly, Sabeel’s commitment is not to promoting this goodwill, but instead to spreading vicious propaganda to assault Israel’s legitimacy.


There is one word that can do justice to Sabeel's philosophy, positions, and practices:


subtle
difficult to perceive or understand; cunningly made;
operating insidiously - awaiting a chance to entrap

Sabeel's propaganda is very well written, and can lead even those with good hearts to question their long-held beliefs, attitudes, and opinions. Indeed, that is Sabeel's goal - and Sabeel is very good at it.

Abq Jew believes that the policies, positions, and practices of the State of Israel are open to and subject to criticism. And he will continue to publish views with which he does not necessarily agree.

Abq Jew's stand is: Abq Jew will publish information and viewpoints that are (or should be) of interest to or important to the Jewish community of Albuquerque and beyond.


Abq Jew stands against Sabeel and for Israel.