Save The Last Dance

Aka "The Duke of Divorce," "The Dean of Divorce," "Dr Estranged Love," and a host of other names that Abq Jew cannot (well, chooses not to) print in this blog, Raoul Lionel Felder is, according to his website,


perhaps America's best known divorce and family lawyer representing in a legal trajectory of more than forty years representing both ordinary citizens and celebrities in over a thousand cases.


Known as “The Lion King of Splitsville” and “Dr Estranged Love,” famed celebrity divorce attorney Raoul Felder, is well known for employing unorthodox techniques — he once kept a piranha in his office to feed during tense negotiations. He’s used to getting what he wants, but always stays within ethical boundaries.

Not everyone may like Felder’s indomitable, go-for-broke style, but you wouldn’t know it from talking to his long list of satisfied clients ...

As a fierce proponent of Israel, he was a Recipient of Defender of Jerusalem Award from Israeli Prime Minister Yitzhak Shamir in 1990.

But all this is background. What Abq Jew found most fascinating was not Raoul Felder's fairly well-known story, but the lesser-known story of his brother, Jerome Solon Felder. 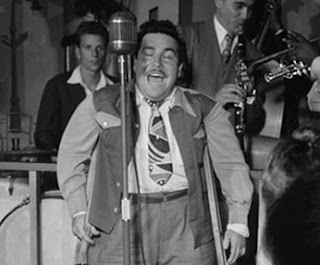 Who the world remembers as Doc Pomus. Wikipedia tells us:


Born Jerome Solon Felder in 1925 in Brooklyn, New York, his parents were Jewish immigrants. Felder became a fan of the blues after hearing a Big Joe Turner record. Having had polio as a boy, he used crutches to walk. Later, due to post-polio syndrome, exacerbated by an accident, Felder eventually relied on a wheelchair.

Using the stage name "Doc Pomus," Felder began performing as a teenager, becoming a blues singer; his stage name wasn't inspired by anyone in particular, he just thought it sounded better for a blues singer than the name Jerry Felder did. Pomus stated that more often as not, he was the only Caucasian in the clubs, but that as both a Jew and a polio victim, he felt a special "underdog" kinship with African-Americans, while in turn the audiences both respected his courage and were impressed with his talent.

Doc Pomus was a songwriter. Collaborating with pianist Mort Shuman, Felder wrote many of the hits of the era: "A Teenager in Love,", "Hushabye," "This Magic Moment," and "Can't Get Used to Losing You" among them.

But the song Doc Pomus is most remembered for is "Save the Last Dance for Me." Wikipedia tells the story behind the song:


In the song, the narrator tells his lover she is free to mingle and socialize throughout the evening, but to make sure to save him the dance at the end of the night. During an interview on Elvis Costello's show Spectacle, Lou Reed, who worked with Pomus, said the song was written on the day of Pomus' wedding while the wheelchair-bound groom watched his bride dancing with their guests. Pomus had polio and at times used crutches to get around. His wife, Willi Burke, however, was a Broadway actress and dancer. The song gives his perspective of telling his wife to have fun dancing, but reminds her who will be taking her home and "in whose arms you're gonna be."

Dedicated to Perri Yellin the Artist, aka Mrs Abq Jew