The Delegitimization of Israel
and Legal Responses:
A Guide for Activists

Professor Guiora's sub-topic was BDS - the movement to use Boycotts, Divestiture, and Sanctions to - what exactly is the goal?


The campaign known as Boycott, Divestment, and Sanctions, or BDS, is a global movement pushing for sanctions against Israel - supposedly for its violations of international law and human rights.

What we’ve seen over the past decade, however, is that BDS is not about bringing peace to the region. Instead, its goal is to delegitimize Israel and ultimately to bring about the end of Israel as a Jewish State.

The BDS movement's demonization of Israel does not recognize the reality of how conditions came to exist, the role of the Arab nations in perpetuating the conditions, or the constant barrage of missiles and violence against the civilian population of Israel.  To the deligitimization activists, Zionism – the movement for the return of the Jewish people to their homeland and the resumption of Jewish sovereignty in the Land of Israel – is the quote-unquote “original sin,” the crux of the conflict.

Looking back in history, we should note that in 1945, the Arab League initiated a boycott of Jewish Palestinian businesses. A year later, it was extended to prohibit contact with "anything Jewish."

Flash forward to 2001, when the BDS movement began in earnest at the UN’s Durban Conference Against Racism, the strategy presented to advance the “complete and total isolation of Israel,” calling for the “imposition of mandatory and comprehensive sanctions and embargos, the full cessation of all links (diplomatic, economic, social, aid, military cooperation, and training) between all states and Israel.”

Eleven years later, the BDS movement is spreading across our country and in Europe, infecting the young and impressionable in universities, through the media and at conferences ostensibly committed to “peace and justice.”

Closer to home, its influence within the mainline protestant churches can be seen gaining traction, with Methodist and Presbyterian leadership entertaining BDS resolutions at their annual policymaking conferences.

Writes Tabitha Korol, “The purpose of BDS is to reverse the events of 1948 – the creation of the State of Israel, which led to the Palestinian refugee tragedy – and to demand the return of those Palestinians and their descendants to their former homes inside the Green Line, allowing for no homeland for the Jews.”

This calls for the removal of an existing state (unique in international politics), based on alleged human rights abuses and military invasions that are never considered for other nations.

BDS prohibits attempts at dialogue, cooperation, and peaceful ties between Israel and Palestinian Arabs, and promotes an impossible one-state solution; Thus, BDS is not about borders or Israel’s size; it is about her very existence.

In Albuquerque, BDS is an omnipresent part of the so-called “peace and justice” community, and home to the groups that sponsor anti-Israel billboards throughout the region.

This leaves activists like us angry, and anxious to defend Israel with action. But the complexities require thoughtfulness and greater understanding, and that’s why we have with us today an extraordinary friend, Amos Guiora Professor of Law at the S.J. Quinney College of Law, the University of Utah.

Before I introduce Amos, I’d like to make a few acknowledgements.
Back to the introduction: Amos Guiora is a Member of the American Bar Association's Law and National Security Advisory Committee, a Research Associate at the University of Oxford, Oxford Institute for Ethics, Law and Armed Conflict; a Research Fellow at the International Institute on Counter-Terrorism, The Interdisciplinary Center, Herzylia, Israel; a Corresponding Member, The Netherlands School of Human Rights Research, University of Utrecht School of Law and was awarded a Senior Specialist Fulbright Fellowship for The Netherlands in 2008.

Professor Guiora has received grants from both the Stuart Family Foundation and the Earhart Foundation.

He served for 19 years in the Israel Defense Forces as Lieutenant Colonel (Retired), and held a number of senior command positions, including Commander of the IDF School of Military Law and Legal Advisor to the Gaza Strip. Professor Guiora was awarded the S.J. Quinney College of Law Faculty Scholarship Award, 2011.

Add these to Professor Guiora's qualifications: He is the only son of Holocaust survivors, and he is the father of Israeli children - one of whom has completed his initial service in Tzahal. More about him later. 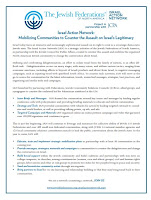 Sam Sokolove mentioned the anti-BDS work of the Israel Action Network (IAN), a strategic initiative of the Jewish Federations of North America, in partnership with the Jewish Council for Public Affairs to counter the assault on Israel’s legitimacy.

The IAN has published a number of FAQs and information sheets, including this One Sheet about IAN activities. And the IAN is also sponsoring the upcoming Israel Advocacy Mobilization in Albuquerque. 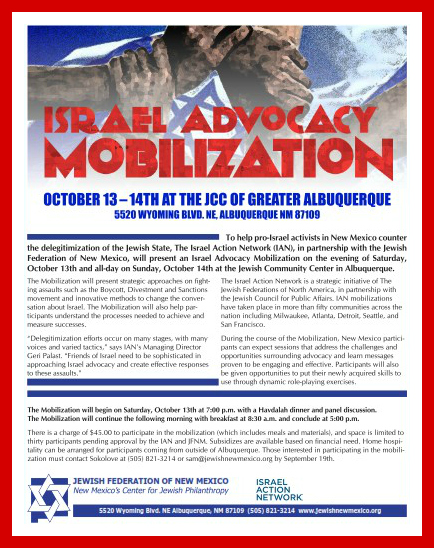 The Mobilization will present strategic approaches on fighting assaults such as the Boycott, Divestment and Sanctions movement and innovative methods to change the conversation about Israel. The Mobilization will also help participants understand the processes needed to achieve and measure successes.

But back to Professor Guiora's son, who (as Abq Jew mentioned above) recently completed his initial service n the Israel Defense Forces.

For the year and a half before his son was inducted into Tzahal, Professor Guiora told his son that he wished for four things:
Professor Guiora condensed these four points into a hand sign - four fingers - that he and his son shared.

And he mentioned that his son flashed him their four-fingers  / four wishes sign as he boarded the bus on his way to Tzahal. 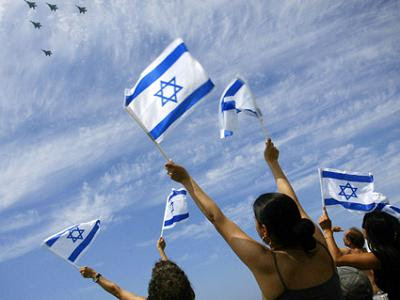 As with the Guiora family, so with all of Israel. Tzahal's moral compass still points to Israel as the Light Unto The Nations. May it ever be so!