A Blessing On Your Head

Caution! Euphemism Alert!  Judaism has always been big on euphemisms - you know, nice words that replace words that are not so nice. Thus for, example, we have the term Bet HaHayyim (House of Life) for cemetery; and the Talmudic tractate named Semachot (Joyful Events), which deals with the laws of mourning.

So, when Abq Jew says "a blessing on your head" - what he means is ... curses! And not just your run-of-the-mill, everyday curses - we're talking Yiddish Curses for GOP Jews!, courtesy of Tablet Magazine and the website - YiddishCursesForRepublicanJews.com! 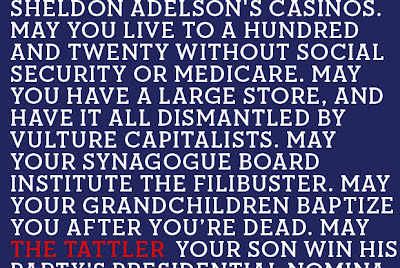 As he mentioned in Labor Day & The Painted Bird, Abq Jew seldom gets political. But his grandfather alav hashalom was a Wobbly, and his great-grandfather zichrono l'bracha was a union organizer. So Abq Jew plans to vote with the Democrats this fall and urges you to do the same.

But Abq Jew wanted to let the curses out before Rosh Hashanah, before the Ten Days of Repentance, and certainly way before Yom Kippur - so his teshuvah will be heartfelt and meaningful. At least until the election.

How important, Abq Jew hears you ask, coould the Curses website possibly be? So important that Michael Schulman of The New Yorker covers it in Shouts & Murmurs.

With the G.O.P. gathered in Florida—the kvetching capital of the world—the husband-and-wife team Ben Abramowitz and Rachel Shukert (both good friends) have launched a project called Yiddish Curses for Republican Jews. Sample curses: “May your child give his Bar Mitzvah speech on the genius of Ayn Rand”; “May you be reunited in the world to come with your ancestors, who were all socialist garment workers.” In the words of not-so-Republican Jew Paul Krugman: “Oy vey.”

In Tablet Magazine, Rachel Shukert says of the birth of the Curses website:

You know how it is.

You’re standing in the hallway outside the bathroom watching your husband shave, your always-simmering wrath toward the state of American politics in general and the Republican Party in particular brought to a rolling boil by several cups of coffee drunk at injudicious speed, and you’re both inveighing against certain distant-ish relatives whose ideological leanings are a constant source of ire, wondering aloud what terrible misfortune might need to befall them to bring them around, or at least lay their hypocrisy bare. That they should suffer a catastrophic illness that their insurance refuses to cover, leaving them nothing to be so bent out of shape about re: the estate tax? That they should be so hot for Israel to bomb Iran that their son drops out of medical school to join the IDF? That their son should be elected president and they should have no idea what the hell they did with his birth certificate? And then a light bulb goes on.

Believe it or not - there were Yiddish curses before the Republicans came along! And, Abq Jew was very pleased to discover, the folks at the Yiddish Radio Project have preserved a good number of them. Examples:


All problems I have in my heart, should go to his head.

He should marry the daughter of the Angel of Death.

All his teeth should fall out except one to make him suffer.

A hundred houses shall he have, in every house a hundred rooms, and in every room twenty beds, and a delirious fever should drive him from bed to bed.

Not pretty. Not nice. And right before the High Holy Days! 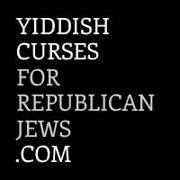 
May they live to a hundred and twenty without Social Security or Medicare.

May their insurance companies decide constipation is a pre-existing condition.

May they sell everything and retire to Florida just as global warming makes it uninhabitable.

OK ... we must cleanse our souls in preparation for the Days of Awe. We must think good thoughts, and always judge our neighbors on the side of goodness. We must cherish our spiritual life.


May they be reunited in the world to come with their ancestors, who were all socialist garment workers.


May their children, friends, siblings, nieces, and nephews send them a link to the YiddishCursesForRepublicanJews.com website every day for the rest of their lives.

Oy vey. Abq Jew asks for your forgiveness. A good and sweet New Year for all of us!