The Holocaust & 9/11:  There was time last week, in between visits to Lena Rose and her family, for Abq Jew & his wife Perri Yellin the Artist to also visit two of New York City's newer landmarks.

Last Wednesday, Abq Jew & Perri began the day by visiting the Museum of Jewish Heritage. The Museum is located near Battery Park, at the very southern tip of Manhattan, within sight of the Statue of Liberty and Ellis Island.


The Museum of Jewish Heritage ... is a living memorial to those who perished in the Holocaust. The Museum honors those who died by celebrating their lives – cherishing the traditions that they embraced, examining their achievements and faith, and affirming the vibrant worldwide Jewish community that is their legacy today. The building, designed by Roche-Dinkeloo, is topped by a pyramid structure called the Living Memorial to the Holocaust.

Since the Museum first opened its doors in 1997, visitors of all ages and backgrounds have gained a perspective on 20th and 21st century Jewish history and heritage. Now in its second decade, the Museum has welcomed more than 1.5 million visitors from all over the world.

The two Biblical quotes that define the Museum’s mission – “Remember, Never Forget” and “There Is Hope For Your Future” – also define the Museum's perspective on the events of the 20th and 21st century Jewish experience. Although the Museum centers on life before, during, and after the Holocaust, the obligation to remember is enriched and enhanced by a commitment to the principles of social justice, education, and culture in the Jewish community and beyond.

Included in the Museum are special exhibitions, public programming, and contemplative spaces, which are intended to enrich the visitor experience.

The first and most important thing to see was the Core Exhibition.


The Core Exhibition tells the story of 20th and 21st century Jewish life from the perspective of those who lived it. Through a rotating collection of 25,000 pieces that includes artifacts, photographs, and documentary films, the Core Exhibition places the Holocaust in the larger context of modern Jewish history. It is organized into three chronological sections: Jewish Life A Century Ago; The War Against the Jews; and Jewish Renewal - each told on a separate floor.

The Core Exhibition is housed in a remarkable six-sided building—symbolic of the six points of the Star of David and the six million Jews who perished in the Holocaust. 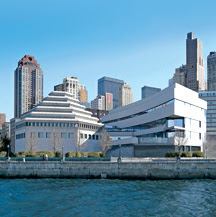 Entry Rotunda
The visitor experience begins with a nine-minute, multimedia presentation that introduces the themes of the Museum. Combining vivid imagery, music, and multigenerational voices, this collage eloquently conveys the richness, diversity, and tenacity of Jewish life around the world.

Jewish Life A Century Ago
The first floor of the Core Exhibition explores vibrant and multifaceted Jewish life in the late 19th and early 20th centuries. Personal artifacts and family photographs accompanied by documentary films provide a rich emotional component to the exhibition.

The War Against the Jews
The second floor tells the story of Europe's Jews confronting hatred and violence, of communities coping with persecution and isolation, and of their struggles to maintain humanity. These galleries present the history of the Holocaust from the point of view of Jews who lived through it, using their own artifacts, photographs, testimony, and historical footage. Chronological displays provide a framework for the historical events of the period.

Jewish Renewal
The third floor of the Core Exhibition focuses on how Jewish individuals and communities rebuilt their lives after the Holocaust and continue to thrive in the 21st century.  The exhibition concludes with how contemporary Jewry has embraced the Jewish value of Tikkun Olam (Repairing the World) and fighting for justice for everyone.

The story of the Jews in the 20th and 21st centuries must be told anew for each visitor, no matter what that visitor's age, knowledge, or sensitivity. Here, the Core Exhibition succeeds - poignantly - in walking the fine line between the morbid and the factual, layering the story as the visitor climbs the floors of the museum. 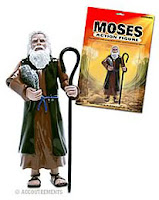 There were two other exhibits - Emma Lazarus, Poet of Exiles and Filming The Camps - plus the OU-supervised kosher Heritage Cafe and the Pickman Museum Shop, where Abq Jew found but, for reasons of shalom bayit did not purchase, Moses Action Figures.

As Abq Jew & Perri were walking from the subway to the Museum of Jewish Heritage, they glanced uptown and saw one of the new skyscrapers being built near the World Trade Center site - Ground Zero. They had not planned to visit the 9/11 Memorial - but they were there; how could they not? 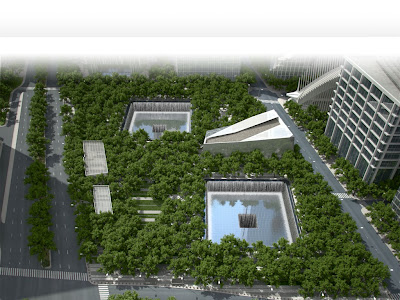 The winner of the World Trade Center Site Memorial Competition was American architect Michael Arad of Handel Architects, a New York- and San Francisco-based firm. Arad worked with landscape architecture firm Peter Walker and Partners on the design which calls for a forest of trees with two square pools in the center, where the Twin Towers once stood.

In August 2006, the World Trade Center Memorial Foundation and the Port Authority of New York and New Jersey began heavy construction on the memorial and museum. The design is consistent with the original Daniel Libeskind master plan that called for the memorial to be 30 feet below street level (originally 70 feet) in a piazza. The design was the only finalist to throw out Libeskind's requirement that buildings overhang the footprints. 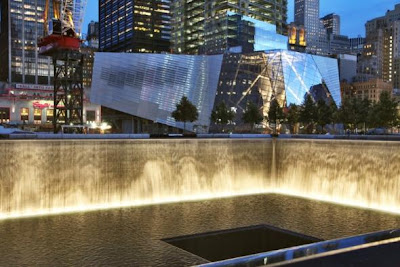 The first and most important thing to see were the Memorial Reflecting Pools.

The Memorial’s twin reflecting pools are each nearly an acre in size and feature the largest manmade waterfalls in the North America. The pools sit within the footprints where the Twin Towers once stood. Architect Michael Arad and landscape architect Peter Walker created the Memorial design selected from a global design competition that included more than 5,200 entries from 63 nations. 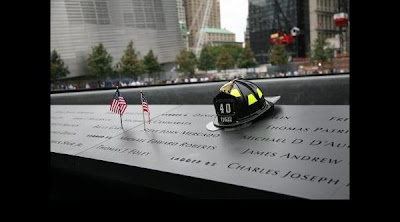 The names of every person who died in the 2001 and 1993 attacks are inscribed into bronze panels edging the Memorial pools, a powerful reminder of the largest loss of life resulting from a foreign attack on American soil and the greatest single loss of rescue personnel in American history.

And after spending one whole day visiting two of the most sacred sites in the city? There was no way around it - three have to eat.