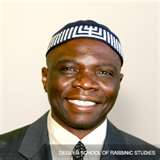 Rabbi Sizomu is the first chief rabbi of Uganda and the spiritual leader of almost 2000 members of the Abayudaya (People of Judah) Jews in Eastern Uganda.

The Abayudayah trace their origin to Semei Kakungulu, a native military leader whom the British converted to Christianity in the 1880s, but who embraced Judaism in 1919.

After his ordination in 2008 by the American Jewish University, Rabbi Sizomu returned to Uganda and established a yeshiva to train African rabbis to serve their ancient land and emerging Jewish communities.

Under the sponsorship of Be'chol Lashon, an organization that advocates for the growth and diversity of the Jewish People, Rabbi Gershom is visiting Jewish communities throughout North America.  Neil Rubin, Editor of the Baltimore Jewish Times, reports:


Growing up amid central eastern Africa’s tumultuous 1960s and 1970s, Gershom Sizomu knew that being Jewish was far from usual.  After all, his father — a rabbi like his father before him — was once arrested for building a sukkah and ransomed from the arresting police officer with five goats.

A genial and warm man, the rabbi wanted people to know that [his] community appreciates Jewish pluralism.

“The Abayudaya Jewish community does not want to be very involved in Jewish denominations, so we’re not comfortable with saying Orthodox, Reform or Conservative,” he said. “We have chosen our Judaism and it’s one that is more suitable to our environment. That means songs with African melodies set in Hebrew. We do bring in customs from the outside world that suit our environment.”

Rabbi Sizomu is the first Abayudaya leader ordained by a western Jewish institution, having graduated in 2008 from the Conservative movement’s Ziegler School of Rabbinic Studies. In July of that year he converted to Judaism 250 people from the village of Nabogoya.

“We may not have a classical Conservative outlook; we have separate seating, but women on our bimah,” he said, “But we respect halachah and Torah and respect strongly Shabbat and festivals. We have our own style.”

Abq Jew was among the large gathering privileged to hear Rabbi Sizomu speak - and sing (Adon Olam), and play guitar!  Others present included Sam Sokolove, Executive Director of the Jewish Federation of New Mexico, who was instrumental (pun fully intended; it was Sam's guitar) in bringing Rabbi Sizomu to the Land of Enchantment.

Also present was the largest convocation (8) of Albuquerque rabbis - maybe ever?  And the most rabbis in one room since ... Graduation Day at JTS?  Dudu Fisher at Carnegie Hall?  The Miss Borough Park Pageant?