Why We Are Here:  Want to know why Abq Jew & his family are living in New Mexico?  Tony Hillerman, of blessed memory, can tell you - and show you - exactly why.

KNME, our local PBS station, posted this video on Facebook today.  Why today?  Dunno.  In any event, KNME says:


Tony Hillerman was a New Mexican for the better part of his years, and captured the people, open vistas and spirit of the American Southwest in his award-winning mystery novels.

In this half-hour documentary, Tony shared his inspirations and life story in a delightful, candid and oftentimes humorous way.

We start with Tony's humble beginnings in dustbowl Oklahoma. We then follow him though France in World War II, his career as a journalist, a university professor and finally becoming one of New Mexicos best-selling authors.

A fascinating story of success, Tony says, "My three fourths of a century has been notable for fortunate outcomes and rare disappointments."

You can view the video on YouTube here.  And you can learn more about Tony Hillerman in his memoir, Seldom Disappointed.  The title comes from his Mama's favorite aphorism:

Blessed are those who expect little;
they are seldom disappointed.
Tony Hillerman's mystery novels are required reading for anyone coming to the Land of Enchantment.  Fortunately, Tony was one of the best - one of the most natural - storytellers Abq Jew has ever had the pleasure to read.

Through this video, we can still hear Tony - telling stories. 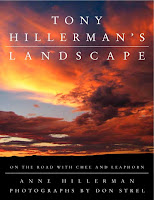 Tony Hillerman fans - and fans of good writing - should also know that there is an annual Tony Hillerman Writers Conference, which will be held this year on November 10 - 12, at Hotel Santa Fe.