One Week in Portsmouth

With Family: With great joy, Mr & Mrs Abq Jew hereby (again; see last week's Welcome Home!) announce that they recently completed their first visit to the new home and second visit to the new home town of their son Dov the Film Editor; their daughter (in-law) Jessica the Surgeon; their grandchildren Vera and Chuck; and their granddog Dave (see Portsmouth Parking and The Jews).

Who presented their New England Printmakers Open-Juried Exhibition, of which the above is but one example of many exemplary works. 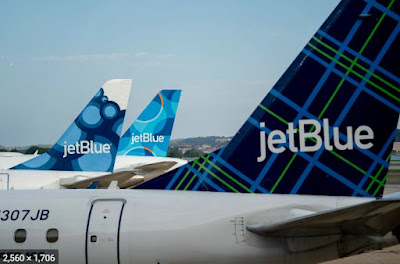 Mr & Mrs Abq Jew were not exactly thrilled to ride on jetBlue's ABQ-JFK Midnight Clipper, After all, they said - how many people could possibly want to fly from ABQ to JFK in the middle of the night, to arrive at daybreak?

Bunches, as it turned out. A full flight. But less than 4 hours in the air. Mr & Mrs Abq Jew had just enough time at JFK for breakfast - then a quick hop to BOS, where their son Dov the Film Editor picked them up and drove them to Portsmouth.

After passing near but not over the wonderful Leonard P Zakim Bunker Hill Memorial Bridge (see 2020's The Bridges of Christian Menn). Which was, of course but not without controversy, named after the Jewish-American religious and civil rights leader Leonard Paul "Lenny" Zakim.

And which the inimitable John McPhee called "pure magic with its optical pyramids of cables coming down from its towers directly to the deck (a so-called cable-­stayed bridge)."

On the way, in beautiful downtown Peabody, Massachusetts - 20 minutes from BOS, and 40 minutes from Portsmouth - we stopped at Larry Levine's Kosher Meat & Delicatessen.

Where we stocked up on enough chicken (yes, they had chicken!) and other supplies (they had kishka! see 2018's Kosher Kishka Comes to Querque!; it has since left) to feed a small army for well more than a week. 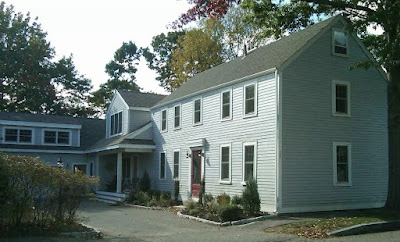 And so Mr & Mrs Abq Jew hung out for one delightful week, with lots of family - Dov & Jessica; Vera, Chuck, and Dave; machetonim David and Kicki (who now also live in Portsmouth, just around the corner from D&J&V&C&D); plus Jan (Jessica's sister) & her husband Justin, who drove up from Long Island.

Add to that the joy of meeting - yes, for the first time, in person - Abq Jew's remarkable second cousin Allison, of the famous (well, to Abq Jew) Rogers family of Portsmouth.

Where was also displayed How I Looked in Auschwitz 1941, one of the most intriguing artworks Mr & Mrs Abq Jew have seen in a while. And mysterious - NHAA provided no information about the print or the artist. Nor is there much on the Web - Abq Jew looked. Perplexing. A riddle, wrapped in a mystery, inside an enigma. 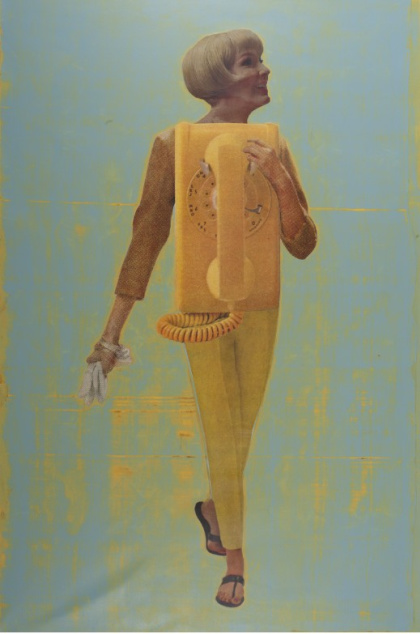 Oy. And then there was Sue Johnson’s Hall of Portraits from The History of Machines, at the very contemporary 3S Artspace. Which -

constructs a disquieting satire that proposes an alternative pictorial history in which two objects of desire become one — the household convenience object and the emergent female form.

The artist looks back to the commercial culture of mid-20th century America that championed progress, new technologies and a pursuit of the latest model. 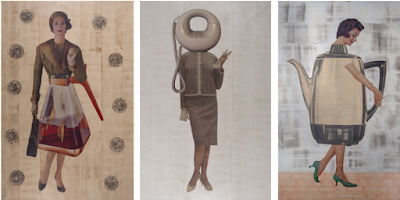 Mining the archive of material culture from advertising to the mass-produced objects that the artist collects, photographs, and ultimately transforms in her work, labor-saving domestic machines merge with the body – or vice-versa.

The surreal, hybrid forms created by Johnson seem familiar yet at the same time we know they are actually a highly fictional, patriarchal fantasy. 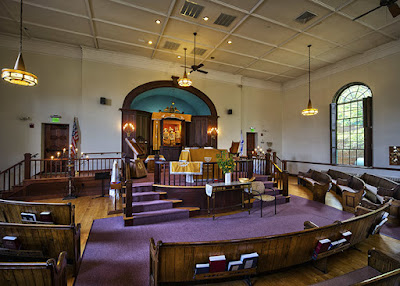 And Mr & Mrs Abq Jew finally got to see
the beautiful sanctuary of Temple Israel! 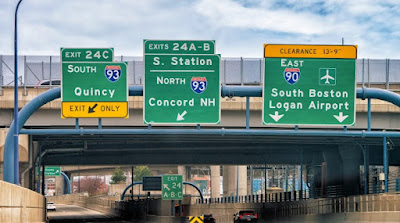 When Mr & Mrs Abq Jew's wonderful vacation week was over, their son Dov the Film Editor drove them back to BOS. Then a quick hop to JFK, where - due to a surprise 3-hour 4-hour 5-hour layover, Mr & Mrs Abq Jew had more than enough time for a 6-course dinner. Departure delayed from Gate 2 30 25 26 - then a 5-hour flight to ABQ that arrived way after midnight. 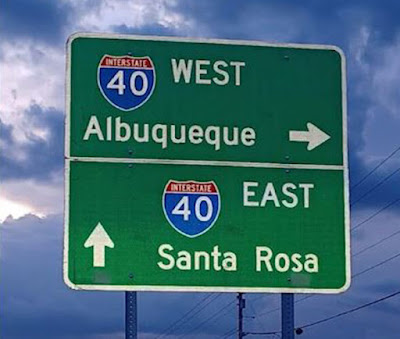 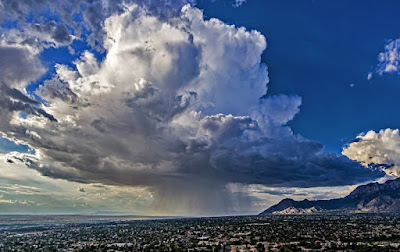