Must We Say Goodbye?  Richard Sandomir reports in The New York Times:

Jay Black, Soaring Lead Singer
of the Americans, Dies at 82

His majestic baritone was the key to hits like “Only in America,” “Come a Little Bit Closer” and his signature song, “Cara Mia.”

Jay Black, whose majestic voice on songs like “Cara Mia” and “Only in America” made Jay and the Americans a potent force in pop music in the 1960s, died on Friday in Queens. He was 82. 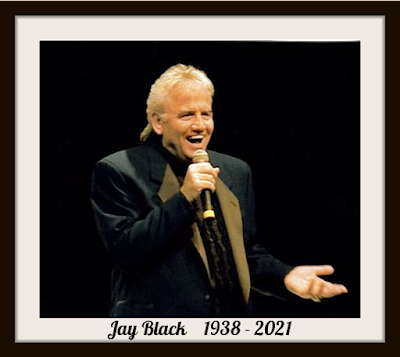 For those of you, Abq Jew's loyal readers, who are too young to remember (or too old to care), calling Jay Black's voice "soaring" doesn't begin to give it justice. And calling it "baritone" completely misses his vocal range.
But calling it "majestic" - that sounds about right.
Jay Black was "The Voice."
Wikipedia tells us -

Jay Black (born David Blatt; November 2, 1938 – October 22, 2021) was an American singer, also known as "The Voice," whose height of fame came in the 1960s when he was the lead singer of the band Jay and the Americans. The band had numerous hits including "Cara Mia", "Come a Little Bit Closer", and "This Magic Moment".
Black was born in Astoria, Queens and grew up in the Brooklyn neighborhood of Borough Park. Jay and his brother spoke Yiddish fluently. In 1966, he recorded a Yiddish song "Where Is My Village" about the Holocaust.

Yes, Jay and the Americans started out as four Jewish boys from Brooklyn - as reported by Matt Robinson in the Jewish Journal.

Speaking of religion, all four of the original band members were Jewish, as was Traynor’s replacement as lead singer, Jay Black (David Blatt).

“I think hearing the music in temple in the minor chord structure definitely influenced us,” Yaguda said, “as did all the music on the radio in New York from Latin to Broadway and soul to country. We used it all to form our own individual sound.”

Curt Schleier of The Forward interviewed Jay Black in 2014.

He grew up in an Orthodox family in Brooklyn. “My father was in shul day and night. In fact, tonight is Simchas Torah and I have to light two yahrzteit candles for my mom and dad. I was in shul all my life when I was young.”

In fact, it was at Temple Beth-El [now known as Young Israel Beth El] in Borough Park  where he first sang in public, as part of Ben Friedman’s famed choir with Cantor Moshe Koussevitzky. While his voice was good, his academic life was less so.

“I never finished high school,” he said. “I got thrown out of New Utrecht. I went to three yeshivas. They threw me out. Three yeshivas. I was a bad kid. I was a wise guy. When I graduated from eighth grade, I was the class comedian. I was always a trouble maker.”

Songfacts tells us that the song "Cara Mia" was written by the Italian composer Mantovani and was a huge UK hit in 1954 for a British singer named David Whitfield. And how the song came to Jay and the Americans - from an interview with original American Kenny [Rosenberg] Vance.

The first lead singer of Jay & the Americans was Jay Traynor, who was replaced by Jay Black (not really a Jay - his real name is David Blatt). Original group member Kenny Vance explains:

"When Jay Traynor left the group, Jay Black came over to one of the guys' houses. He was selling shoes for Thom McAn making $60 a week, and he drove up with an old car, with a rope holding the hood down, and he came in the house and he had that song in mind, because I think he thought that the original guy that did that was David Whitfield, and he sang it on the Ed Sullivan Show.

That version, there's a bridge to it, there's a whole kind of different feeling to it. Like in a Johnny Cash movie, because we only knew three or four chords ourselves, those are the four chords we played to it, and it became a rock and roll song. We left out the bridge because we couldn't play it.

And that was it, he loved the song. We would do it in our show for many years, and then finally I think in '65 when our contract was sold to United Artists, they decided to record it, and it became a smash."

So, Abq Jew hears you ask -

Well. David became Jay when he took over Jay Traynor's role as lead singer. You know - brand loyalty and all. As for Blatt becoming Black -

“I was on the Mike Douglas show. I used to do the show regularly. I never mentioned my last name on the air. One day, Mike asked me what my last name was and I mumbled Blatt, but he heard Black.

He said, ‘Black?’ I said yes, a little lie. But everyone loved the name.”