You Know What I'm Talkin' About? Jackie Mason (Yacov Moshe haKohen Maza) has died. Which comes to Abq Jew as a shock. Abq Jew had sorta lost track of Jackie Mason for a few decades, but fondly - warmly, lovingly - remembers when Jackie Mason was just starting out.

Just a few years ago. 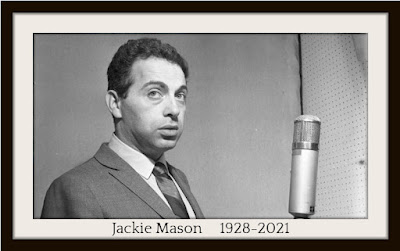 For you younger folks out there, here is Tom Hanson's tribute, which ran last Sunday on the CBS Evening News:
Philissa Cramer says in The Forward that Jackie Mason was a Jewish American comedy icon, and provides some videos to prove it. Michael Goldfarb, also in The Forward, describes how Jackie Mason remade the world of Jewish stand-up comedy.

“My ambition all my life was to be a star,” Jackie Mason once said, but few stars had a slower or more roundabout path to fame. He didn’t become a stand-up comedian until he was about 30, after giving up his original name, Yacov Maza, and his original profession as a rabbi.

The brash edge of chutzpah was always there — Mr. Mason’s first comedy album was called “I’m the Greatest Comedian in the World Only Nobody Knows It Yet” — but he was as surprised as anyone when his astringent jokes about modern life and Jewish cultural identity finally struck a chord with the wider culture.

He was in his 50s — his exact age was always a matter of conjecture — when he became a sensation with the 1986 Broadway debut of his one-man show, “Jackie Mason’s The World According to Me!”

A comic bit about visiting a psychiatrist became a madcap tale of wordplay and philosophical absurdity — the Marx Brothers filtered through Abbott and Costello.

“I went to a psychiatrist,” Mr. Mason said in one version of the routine, “and I’m not ashamed to admit it, because I did not know who I was. He took a look at me; right away he said, ‘This is not you.’

And William Grimes of The New York Times wrote:

Jackie Mason, 93, Dies; Turned Kvetching Into Comedy Gold
He kept the borscht belt style of comedy alive long after the Catskills resorts had closed and eventually brought it, triumphantly, to Broadway.

Jackie Mason, whose staccato, arm-waving delivery and thick Yiddish accent kept the borscht belt style of comedy alive long after the Catskills resorts had shut their doors, and whose career reached new heights in the 1980s with a series of one-man shows on Broadway, died on Saturday in Manhattan. He was 93.

His death, at Mount Sinai Hospital, was confirmed by the lawyer Raoul Felder (see 2012's Save The Last Dance), a longtime friend.

Mr. Mason regarded the world around him as a nonstop assault on common sense and an affront to his sense of dignity. Gesturing frantically, his forefinger jabbing the air, he would invite the audience to share his sense of disbelief and inhabit his very thin skin, if only for an hour.

“I used to be so self-conscious,” he once said, “that when I attended a football game, every time the players went into a huddle, I thought they were talking about me.” Recalling his early struggles as a comic, he said, “I had to sell furniture to make a living — my own.”

The idea of music in elevators sent him into a tirade: “I live on the first floor; how much music can I hear by the time I get there? The guy on the 28th floor, let him pay for it.”

Here's the Luxury Apartments bit, which anyone who has ever lived in - or thought about living in - NYC (or any big city, these days) can surely relate to: