A Day of Revenge

Approaching Menachem Av: Remember a few weeks ago (see Da Roo Ron Ron Ron)? Seems like an awfully long time. Abq Jew recalls that he was planning (Billy Nader) to do a few blog posts about some of the new Jewish music that's just coming out.

In the meantime, we have run into The Three Weeks, when listening to music is discouraged. There are, of course, different interpretations of this discouragement. And far be it for Abq Jew to tell you, his loyal readers, how to observe! So here we go with an angry song that will not lighten anyone's heart. 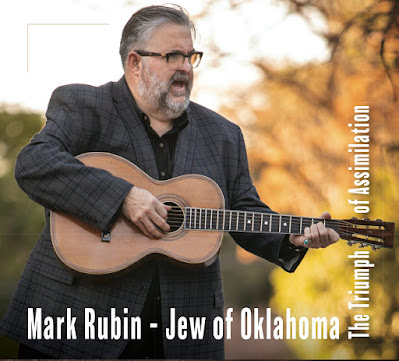 The song, A Day of Revenge, is from Mark Rubin's newest album, The Triumph of Assimilation.  There are a few happy songs on The Triumph - but not a lot. John Apice of Americana Highways reports:

You don’t have to be Jewish to appreciate
the musical journey this 10-cut collection affords.

The Triumph of Assimilation ... provides a well-planned showcase with slicing vocals that finds its place as aggressive as any Woody Guthrie labor song. It’s a broad folk-tradition collection.

Rubin does not seek to challenge, just take his righteous place alongside other people who seem to sing loud about their own issues. Lots of clever Jewish words thrown in for lyrical effect – I wonder if Bob Dylan would dare cover one?

I know Phil Ochs or Kinky Friedman would. 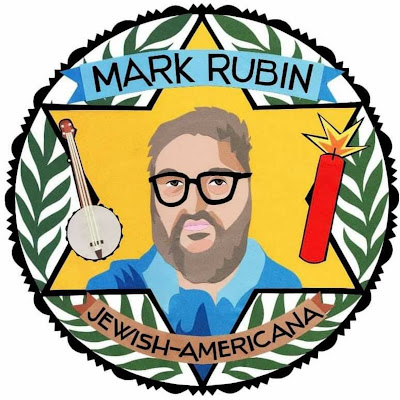 Somehow, Abq Jew had never heard of Mark Rubin, Jew of Oklahoma. But his website (JewOfOklahoma.com - of course!) tells us (in part) -

His credits in the Jewish music world include long time collaborations with Frank London’s Klezmer Brass All-Stars, The Other Europeans, and Andy Statman, as well as two decades on faculty at KlezKamp.

Today, he lives and works as a professional musician in New Orleans and makes a study of the musical traditions and cultures of South Louisiana. He recently took a position at the Museum of the Southern Jewish Experience where he jokes he's an exhibit. 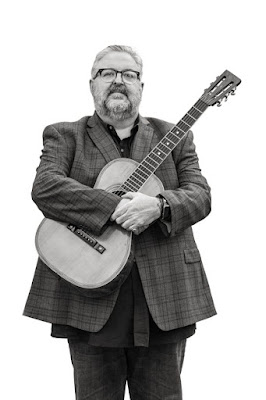 In a separate interview (also in American Highways), Hannah Means Shannon tells us that The Triumph -

... reflects Rubin’s desire to fuse his very Oklahoma and Texas “nurture” culture with the “nature” of his Jewish roots and his involvement in the Yiddish Renaissance’s Klezmer music scene.

If that sounds like a natural goal for someone with such a varied background, it definitely hasn’t been a simple one for Rubin, but it’s one that’s come sharply into focus on the new album.

The Triumph of Assimilation calls out the complexity of cultural identity in America and the bald-faced xenophobia and racism that Rubin has faced as a Jewish Southerner, but it also tracks the renewed threats of fascism and anti-Semitism in the South, where it now seems more “allowed” than ever in recent history.

Mark Rubin composed the song A Day of Revenge from a poem, A Tog Fun Nekome, written by the Polish Yiddish poet Mordechai Gebirtig (see July 2011's March of the Jobless Corps).

Gebirtig wrote the poem while he was interned by the Nazi's in 1940. He and his wife were gunned down randomly during the clearing of the Krakow Ghetto in 1942. Rubin says:

A Day of Revenge

Listen close what I say
There'’ll come a time, there'’ll be a day
And though it seems so far away
I promise that we’ll make them pay
There’ll be revenge
For the suffering and pain
Revenge
For us who still remain
Oh that day will come along
When we right each every wrong
There’ll be revenge
For the widows, orphans it must suffice
For the millions blood since sacrificed
Our Prophets cry out for us to awake
For retribution so shall we take
Mankind will turn its back on war
I see it clear on a distant shore
It’s coming here like Noah’s dove
A message of kindness, peace, and love

Now. You, Abq Jew's loyal readers, may ask:
Why the anger? Why the call for revenge? Well.

Because of this essay - 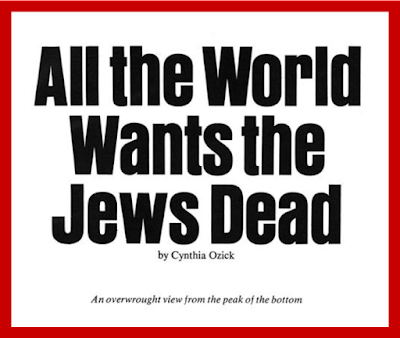 The brilliant Jewish writer Cynthia Ozick wrote this searing essay shortly after the 1973 Yom Kippur War. It was published in the November 1974 issue of Esquire.
Abq Jew hadn't read All the World Wants the Jews Dead in many years, but he had remembered it very well every day since the first time he read it. Rereading it now - Abq Jew wonders if anything has changed at all after all these years.
And because of this tweet - 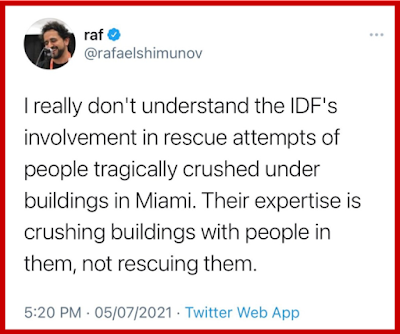 Canary Mission - which documents individuals and organizations that promote hatred of the USA, Israel, and Jews on North American college campuses - tells us who Rafael Shimunov is.

Rafael Shimunov is an anti-Israel activist and “early leader" of IfNotNow (INN) who was arrested with other INN activists for holding an anti-Israel “liberation seder." He has defended anti-Semitic remarks, promoted incitement, defended violent demonstrators and spread hatred of Israel.Shimunov attended an event that repurposed Jewish rituals to demonize Israel, protested against the American Israel Public Affairs Committee (AIPAC), has opposed the Birthright Jewish heritage tour and promoted anti-Israel agitators, as well as the Boycott, Divestment, Sanctions (BDS) Movement. 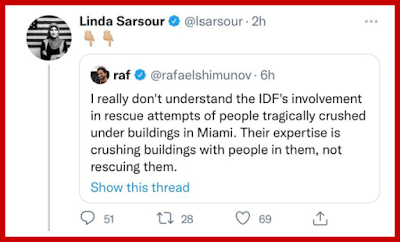 And Abq Jew must tell you - he must! he must! that our old 'friend' Linda Sarsour felt she needed to retweet Rafael Shimunov's antsemitic tweet. 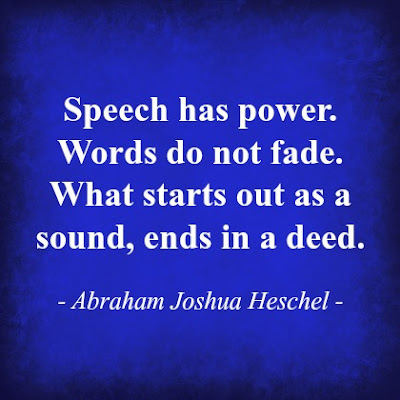 To which Abq Jew firmly states - 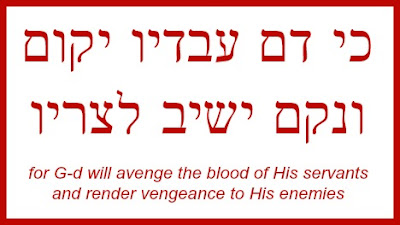 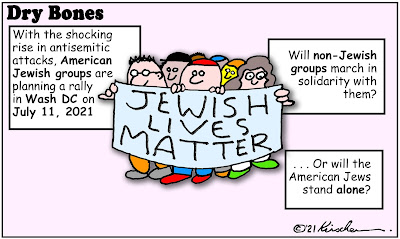 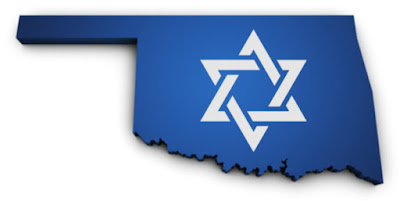 Let us now return to the saner but still sorta angry
world of Mark Rubin, Jew of Oklahoma.
And Triumph of Assimilation.
Where the May 2021 CD Hotlist reports:

Mark Rubin (Killbilly, Bad Livers) has always been Jewish, but has only made his Jewishness a central feature of his musical identity in the past 20 years. But as you can see from the presentation of his new album (not to mention song titles like “Down South Kosher” and “Good Shabbes”), the implications of his Jewishness and its intersection with his Southernness have become central to his musical and social concerns — and the musical result is engaging, fun, and at times chilling.

Someone who grew up having crosses burned on his front lawn and bricks thrown through his window on Hitler’s birthday, but who fell in love with the music of his region early on, is inevitably going to have a — shall we say — complex relationship with American country and folk-derived music and you’ll hear ...

... that complexity everywhere on this album: on his setting of Mordecai Gebirtig’s poem “A Day of Revenge”; on his ballad about the lynching of Leo Frank; on the “bonus Hanukkah track” “Spin the Dreidel.” And on his clawhammer banjo arrangements of Klezmer tunes.

The music is genius; spin this one at a party
and watch the conversations stop.