High-Speed Rail and The Jews

Yes! We Have Space Lasers! Abq Jew is sure you have heard all about us Jews and our space lasers. ICYMI, New York Magazine's Jonathan Chait reports -

Just over two years ago, [GOP congresswoman Marjorie Taylor] Greene suggested in a Facebook post that wildfires in California were not natural. Forests don’t just catch fire, you know.

Rather, the blazes had been started by PG&E, in conjunction with the Rothschilds, using a space laser, in order to clear room for a high-speed rail project. 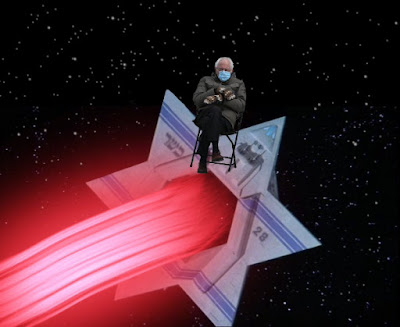 Has Abq Jew mentioned that, before many (but not all!) of you were born, he was awarded a Bachelor of Science degree from UCLA in Engineering & Applied Science?
And that, beyond all the Albuquerque and Jewish mishegas (that's a technical term), Abq Jew still "thinks" (if that's the proper term) like an engineer? Which (of course) led Abq Jew to ask the question:
Is California even building High-Speed Rail? 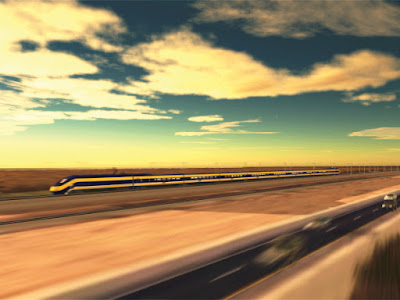 Abq Jew did the research (you're welcome!) and discovered that - according to the High Speed Rail Alliance - California is indeed building High Speed Rail. In fact, when all the planned segments are in place - 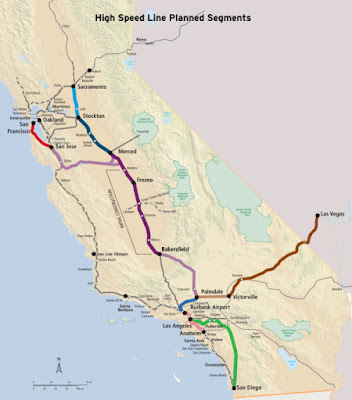 you'll be able to go from Los Angeles to San Francisco in less than three (3!) hours. How wonderful. More importantly, you'll be able to go to Las Vegas (that's NV, not NM; but we were here first) without flying or driving. That just seems incredible. 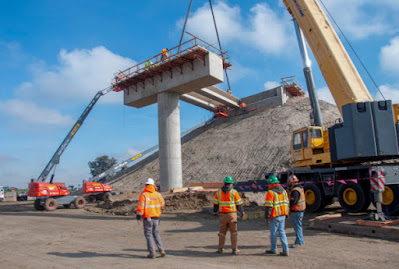 Call Abq Jew crazy (many have) - but using fires, however ignited, to clear land for construction seems to him of dubious efficacy. And Abq Jew also discovered that the high-impact Central Valley segment that is currently under construction is nowhere near the site of the 2018 Camp Fire. Which PG&E caused (it was an accident!).
In conjunction with the Rothschilds. 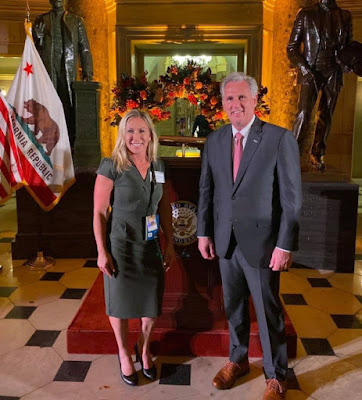 In November 2018, California was hit with the worst wildfire [the Camp Fire] in the state’s history.

At the time, future Rep. Marjorie Taylor Greene (R-GA) wrote a bizarre Facebook post that echoed QAnon conspiracy theorists and falsely claimed that the real and hidden culprit behind the disaster was 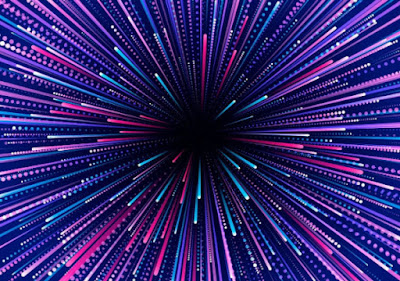 Rep. Greene is a proponent of the Camp Fire laser beam conspiracy theory. She wrote a November 17, 2018, Facebook post - which is no longer available online - in which she said that she was speculating “because there are too many coincidences to ignore” regarding the fire, including that then-California Gov. Jerry Brown (D) wanted to build the high-speed rail project and “oddly there are all these people who have said they saw what looked like lasers or blue beams of light causing the fires.”

She also speculated that a vice chairman at “Rothschild Inc, international investment banking firm” was somehow involved, and suggested the fire was caused by a beam from “space solar generators.”

Greene added: “If they are beaming the suns energy back to Earth, I’m sure they wouldn’t ever miss a transmitter receiving station right??!! I mean mistakes are never made when anything new is invented. What would that look like anyway? A laser beam or light beam coming down to Earth I guess. Could that cause a fire? Hmmm, I don’t know. I hope not! That wouldn’t look so good for PG&E, Rothschild Inc, Solaren or Jerry Brown who sure does seem fond of PG&E.” 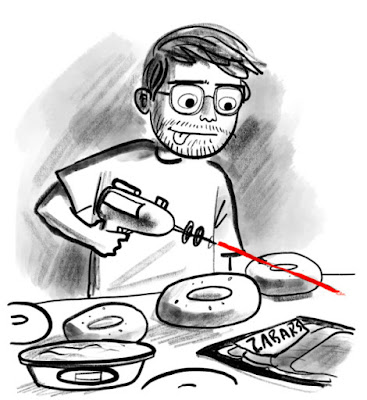 Now when this all came out (was that only last week?), hilarity did indeed ensue.

The Rothschilds keep their space laser
next to their machine that controls the weather.

All this time, the slogan was really:
Only Jews Can Prevent Forest Fires.

I remember when the Rothschilds called me
and were like “Nu, you vant we should
burn California with the space laser?”

We wandered in the desert for forty years
to get this laser and we’re keeping it, damnit. 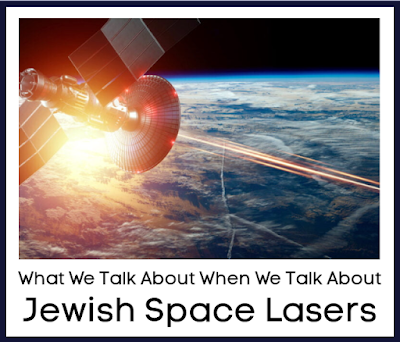 But then there was this, from Rabbi Mike Rothbaum (@Rav_Mike) of Congregation Beth Elohim in Acton, Massachusetts.
Before you laugh too hard,
remember:

There's a direct line to
"Jews have space lasers"
that runs through
"Jews poison our wells"
to
"Jews drink our babies' blood"
and back to
"Jews killed our god."

After you stop laughing,
go back to your community
and root out Jew-hatred. 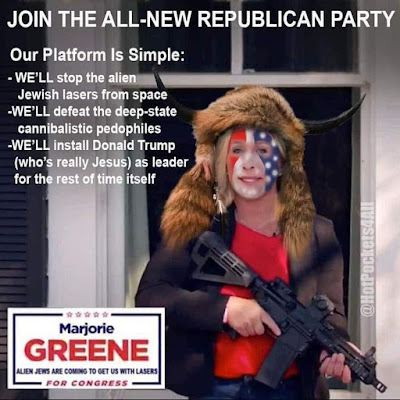 Andrew Silow-Carroll, now Editor of The Jewish Week, asks: Will Marjorie Taylor Greene get the last laugh? Satire, says Mr Silow-Carroll, is a feeble weapon when conspiracy mongering goes mainstream.
Will satire be enough? Mr Silow-Carroll says he has his doubts, and concludes -

Jews told great jokes about Hitler, and Stalin, and probably Nebuchadnezzar for all I know. It wasn’t enough. Standing up to madmen and madwomen takes people of conscience, with the courage to back up their principles with clear action.
Although given the political winds these days, it might just be easier to build a space laser. 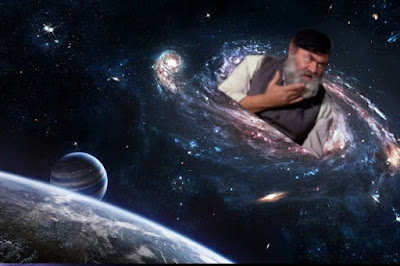