Of Kings and Banjos and Hounds

Forgiveness in the Age of 45: Does this hound look guilty? As Abq Jew first declared on Facebook, our Ziggy stole and quickly devoured an entire chicken breast, nicely cooked, right off the counter. Love him anyway, forever. 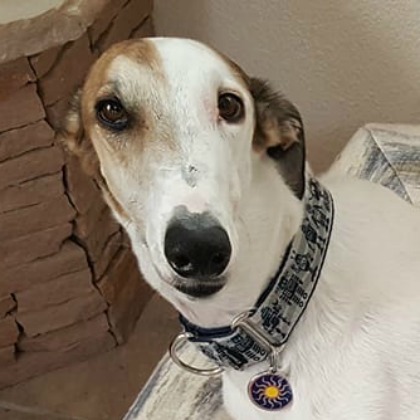 Yes, Abq Jew could have attempted an intervention. This, however, did not seem the wisest course of action. Especially since Abq Jew ... 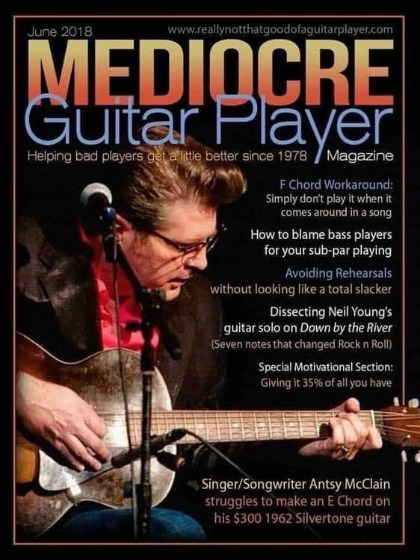 ... requires all of his fingers to play his guitar. Even as [un]well as he does. 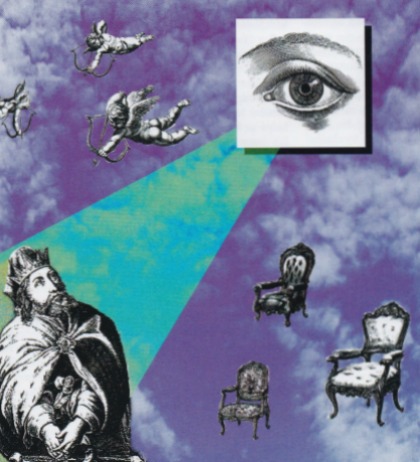 The current issue of Moment Magazine (Ask The Rabbis | High Holidays) asks ... um, the rabbis ... an important question for this time of year:


Are There Things That Can't Be Forgiven?

Here are two responses that resonated with Abq Jew.

The most unforgivable king in Jewish history was Menashe, son of Hezekiah, who led his kingdom into idolatry.

As they carried him off to Babylon in chains, he desperately turned to God for forgiveness. But the angels blocked the heavens with heavy furniture [see image above] and nailed in extra boards to prevent that mamzer's plea from being heard.

What did God do? While the angels were engaged in choir practice, He bored a tiny hole in the boarded-up heavenly floor so that He could hear Menashe's plea (Midrash Devarirn Rabbah 2:20).

But that's God's thing. For us mere mortals, it depends. If someone accidentally bumps a cart into you in the supermarket, you can forgive instantaneously.

On the other hand, if someone bumps you with an SUV, you may not be so quick to forgive as they fit your legs, hip and nose with prosthetics -because you're human, and you hope he loses all of his teeth except one, and that one has a toothache!

However, if we do transcend our mortality and forgive the sins committed against us by others, "God in turn will dismiss our sins" (Talmud. Bavli, Rosh Hashanah 17a).

Some misdeeds have severe, irreversible effects and are seemingly beyond forgiveness. At the same time, at the core of Judaism is forgiveness. We are taught to emulate G-d and forgive, just as G-d is all-forgiving.

How do we reconcile these apparently contradictory ideas?  We sometimes find ourselves in situations where the betrayal and pain are so great that we are justified in not forgiving. At those times, we need to remember the saying that


"Not forgiving someone is like drinking poison
and expecting the other person to die."

Forgiveness does more for the provider than the recipient. It does not magically make the pain go away, but it allows one to move past the hurt and begin healing. Not forgiving amplifies the consequences of a misdeed and perpetuates its negative effects.

Better to forgive and move on to a brighter future than hold on to an unforgivable offense and be stuck in a dark past.


And Then There's This 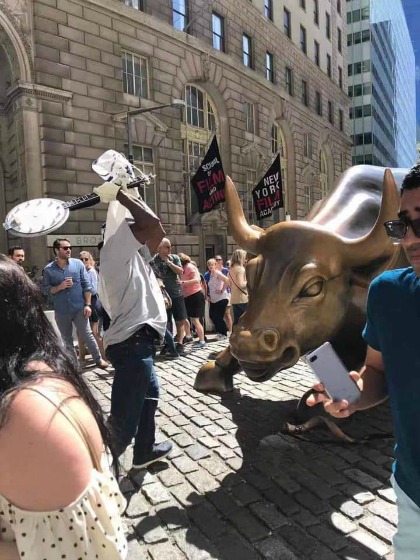 
Wall Street’s ‘Charging Bull’ has been defaced again, this time by a metal banjo

It has been splashed with paint — twice — stared down by the much-beloved “Fearless Girl” and repeatedly reviled as the symbol of corporate greed.

On Saturday afternoon, Wall Street’s long-suffering “Charging Bull” endured yet another attack that left it with a six-inch-long gash above its brow, along with a dozen deep scratches.

Tevon Varlack, 42, of Dallas was charged with criminal mischief and disorderly conduct on Saturday in connection with the vandalism.

A witness told the New York Times that Varlack was cursing President Trump as he swung the banjo against the bronze sculpture, sending loud clanging through the Bowling Green park in Manhattan’s financial district and startling tourists hoping for a photo with the bull’s famous gonads.

Police declined to confirm this, writing only that the man responsible for the attack was “ranting incoherently.” 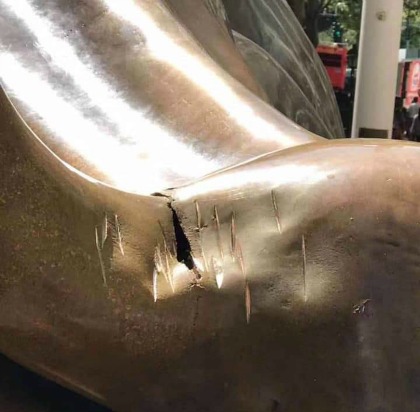 Aiden Pink of the Forward, however, reported the same incident somewhat differently.

A man who appeared to be wearing a tallit, a Jewish prayer shawl, was arrested Saturday after allegedly smashing the iconic Charging Bull statue in New York’s financial district.

Tevon Varlack of Dallas was arrested after allegedly damaging the bronze statue by repeatedly thwacking it with a banjo, ArtNet reported.

Varlack was reportedly wearing a t-shirt with the words “Let Us Not Forget The Ten Commandments,” leading some to wonder whether the action had anything to do with Moses’s destruction of the Golden Calf statue in the Bible.

Varlack was charged with criminal mischief, disorderly conduct, and criminal possession of a weapon (apparently a reference to the banjo), and was released on bail but told to stay away from city landmarks, according to ArtNet.

Varlack also repeatedly yelled “F—- Donald Trump” during his alleged attack on the bronze beast, the New York Daily News reported. The bull was left with a hole in its right horn and several scratches.

The Charging Bull statue has been a symbol of New York’s financial sector since its installation in 1989, and drew new attention after another sculptor placed her own “Fearless Girl” statue in front of it.

And Then There's Valerie Plame 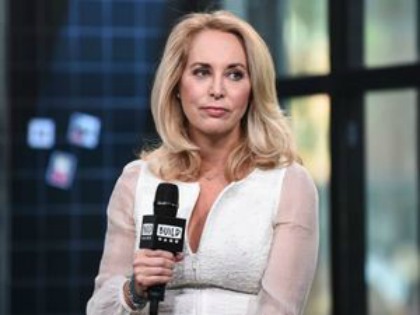 Aiden Pink of the Forward (yes, him again) reported this story.

A former CIA operative who faced criticism for sharing anti-Semitic articles on social media and is now running for Congress in New Mexico unveiled her first campaign ad on Monday, which included a reference to her Jewish heritage.

Valerie Plame, a former spy whose identity was leaked in one of the George W. Bush administration’s most notable scandals, released a video on Monday promoting her candidacy for the Democratic nomination in the Land of Enchantment’s third congressional district, which includes Santa Fe and the rest of the state’s north.

Her campaign video plays up her national security bona fides, even showing her performing a high-speed U-turn in a sports car while her voiceover states, “Yes, the CIA really does teach us how to drive like this.”

Plame attracted controversy in 2017 after tweeting links to anti-Semitic articles from a Holocaust-denying website, including one headlined “American Jews Are Driving America’s Wars” and another that claimed that Israel was behind the 9/11 terror attacks. Plame at first defended her comments before apologizing and deleting her Twitter account. It has not be revived since.

Plame again apologized in May 2019 in interviews on CNN and MSNBC after she announced her candidacy, claiming that she had only “skimmed” the articles she shared. “I’m human and we all make mistakes,” she said. “It was just a doozy, and it was very public.”

Plame’s campaign ad notes that she is descended from Ukrainian Jewish immigrants. Plame’s paternal grandfather was Jewish, a fact that she did not know until she was an adult, she admitted in her memoir. Plame was raised Protestant.

And Then There's Sallie Mae


When we Jews gather on Yom Kippur, we will all hope and pray and plead that the New Year will see us being forgiven ... for the student loan burden we all (well, almost all) carry.

Colin Nissan of The New Yorker | Shouts & Murmurs assures us, however, that if (G-d forbid!) forgiveness doesn't come - there is a way to pay off those student loans. He begins ...


Pay Off Your Student Debt in Three Easy Lifetimes

At Extended-Student-Loan Solutions, we believe that the problem of student-loan debt is larger than life. This life, that is. That’s why we’re giving you two more lifetimes to pay it off.

Q: Just so I’m completely clear on this, what the f**k are you talking about?
A: We hear all the time from anxious students who think they’ll probably grow old and die before they pay off their loans. We’re proud to be able to look them in the eye and say, “Go ahead and die. We’ve got you covered.”

Q: How can I continue my payments if I’m dead?
A: Our patented reincarnation software tracks you as you move into your next life, seamlessly transferring your loan to the new you so that you don’t miss a single payment.

Q: How exactly does this benefit me?
A: By extending your loan’s “life,” so to speak, we’re able to decrease your monthly payments while increasing our chances of getting repaid. Imagine reducing the stress that comes with paying off an unreasonably large sum of money in one lifetime. Then imagine us reducing the stress of loaning those sums of money to people who majored in philosophy.

Q: So, are you saying I can stop making payments now and just let my future selves cover the rest?
A: Unfortunately, no. It’s going to take all three of you to close this thing out.

And Then There's Ziggy


As all of you avid The New Yorker readers (you are, aren't you) will surely recall, it was indeed Colin Nissan who, back in May, advised us

So Abq Jew is pretty sure that Colin's plan for paying off student loans will, as they say, pan out.


Q: What if I actually pay off my loan
before I die, in this life?
A: Oh, my God, that’s adorable.