Popular American Music: Abq Jew is happy to announce that noted composer, lecturer, and recording artist Jane Ellen will be teaching a class in March at Congregation B'nai Israel in Albuquerque. 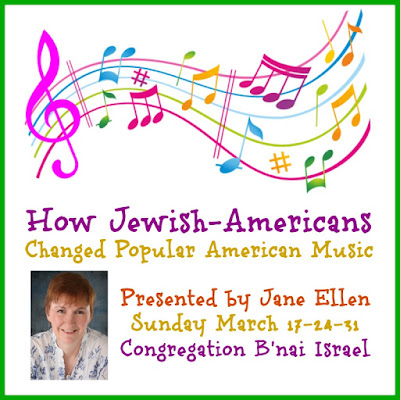 Which Abq Jew was fortunate enough to catch in situ. But if you were not - for lack of Senior ID or because, for example, you work[ed] during the day -


Here is your chance.

This three-part series will focus on the invaluable contribution of Jewish-American composers, musicians, and entertainers to the tapestry of popular music in the United States since the late 19th century.

Part 1 will trace the earliest roots from Tin Pan Alley to the Yiddish Theatre and finally on to the Great White Way, where Jewish-Americans almost single-handedly invented America's most valuable artistic export: the Broadway musical. Future installments will include jazz, pop, and rock

This lecture, Part 2, begins with entertainers in vaudeville and on Broadway; then on to the rise of the Big Band era and popular bandleaders during the 1930s-40s. Finally we look at those composers who brought life to our favorite films on the silver screen.

The series concludes with a look towards the future in a myriad of styles including the diverse contributions of such artists as Stan Getz, Bob Dylan, Carole King, Laura Nyro, Janis Ian, Paul Simon, Bette Midler, Joey and Tommy Ramone, Billy Joel, Béla Fleck, Beastie Boys, Drake, Pink, and many more. 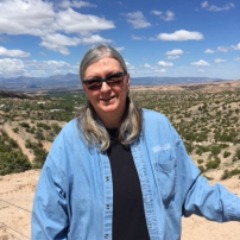 Jane Ellen is an active composer, lecturer, and recording artist, with multiple CDs and over 60 print publications to her credit.

Currently living in the southwestern US, she considers herself a citizen of the world and travels at every opportunity.


And the Angels Sing