A Night at the Garden

It Can Happen Here: Yes, the Academy Awards are coming up - on Sunday February 24, to be exact. Among the Oscar nominees this year - for Best Documentary (Short Subject) - is a film that shows what happened when it almost happened here. 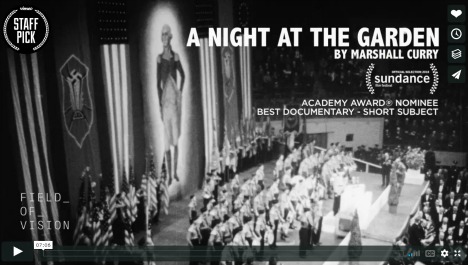 If you haven't heard of A Night at the Garden - you will. On CNN and MSNBC. But not on Fox News! Ari Feldman reported in The Forward on February 14:

Fox News will not air an ad for an Oscar-nominated documentary about American Nazism, the Hollywood Reporter reported.

The 30-second ad, called “It Can Happen Here,” is for “A Night At The Garden,” a documentary short about a 1939 meeting of the German American Bund, a pro-Nazi organization. 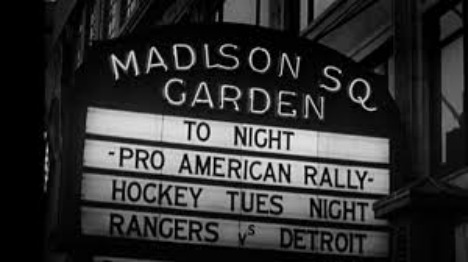 That infamous meeting, which gathered 20,000 people in New York’s Madison Square Garden, was a dramatic show of American support for Hitler — and of American anti-Semitism.

A Night At The Garden is pieced together from archival footage of the event, recalls the shocking level of determination and organization achieved by American Nazis and their supporters.

But Fox News rejected the ad for the short, which is meant to warn that Nazism and fascism can happen in American. The ad, which Fox News’ leadership deemed “not appropriate,” was meant to be aired for the Sean Hannity’s show, historically the most-watched cable news broadcast.

“It’s amazing to me that the CEO of Fox News would personally inject herself into a small ad buy just to make sure that Hannity viewers weren’t exposed to this chapter of American history,” said Marshall Curry, the director of the short. 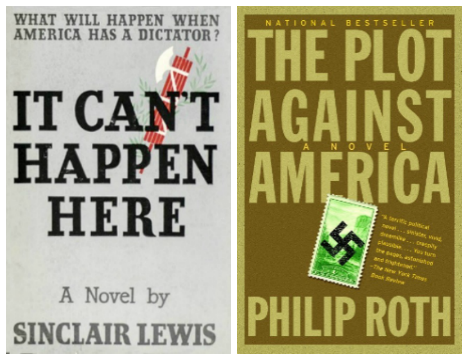 Sinclair Lewis predicted it in It Can't Happen Here.


It Can't Happen Here is a semi-satirical 1935 political novel by American author Sinclair Lewis, and a 1936 play adapted from the novel by Lewis and John C. Moffitt.

Published during the rise of fascism in Europe, the novel describes the rise of Berzelius "Buzz" Windrip, a demagogue who is elected President of the United States, after fomenting fear and promising drastic economic and social reforms while promoting a return to patriotism and "traditional" values.

After his election, Windrip takes complete control of the government and imposes a plutocratic/totalitarian rule with the help of a ruthless paramilitary force, in the manner of Adolf Hitler and the SS. The novel's plot centers on journalist Doremus Jessup's opposition to the new regime and his subsequent struggle against it as part of a liberal rebellion.

And Philip Roth updated it in The Plot Against America.


The Plot Against America is a novel by Philip Roth published in 2004. It is an alternative history in which Franklin D. Roosevelt is defeated in the presidential election of 1940 by Charles Lindbergh.

The novel follows the fortunes of the Roth family during the Lindbergh presidency, as antisemitism becomes more accepted in American life and Jewish-American families like the Roths are persecuted on various levels.

The narrator and central character in the novel is the young Philip, and the care with which his confusion and terror are rendered makes the novel as much about the mysteries of growing up as about American politics.

Roth based his novel on the isolationist ideas espoused by Lindbergh in real life as a spokesman for the America First Committee, and on his own experiences growing up in Newark, New Jersey. 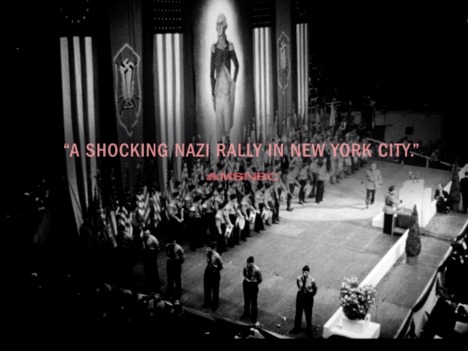 And it was fully on display when the German-American Bund held a rally at Madison Square Garden in 1939, on George Washington's birthday. Jason Daly of Smithsonian Magazine wrote in 2017 about "A Night at the Garden":


The film shows about six minutes of the rally, including the American Nazis marching into the hall in the party’s brown uniforms, reciting the pledge of allegiance and listening to the national anthem before giving Nazi salutes.

It also includes a piece of a speech by Fritz Kuhn, the leader of the German-American Bund (the American wing of the Nazi party), in which he rails against the "Jewish-controlled media" and says it’s time to return United States to the white Christians who he says founded the nation.

But first - please watch the film. It's only a bit over 7 terrifying minutes long.
Here is how it gets better: with a remarkable display of Jewish bravery.


At one point during the speech a 26-year-old plumber’s helper from Brooklyn named Isadore Greenbaum charges the stage and yells, "Down with Hitler." 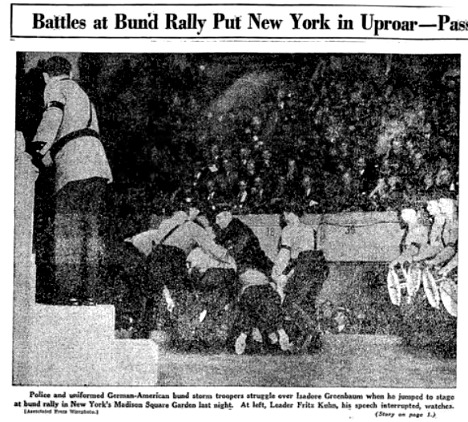 He is beaten up by Bund guards and his clothing is ripped off in the attack before New York police officers arrest him for disorderly conduct.

In court that night, the judge said,

“Don’t you realize that innocent people might have been killed?”

“Don’t you realize that plenty of Jewish people might be killed with their persecution up there?” 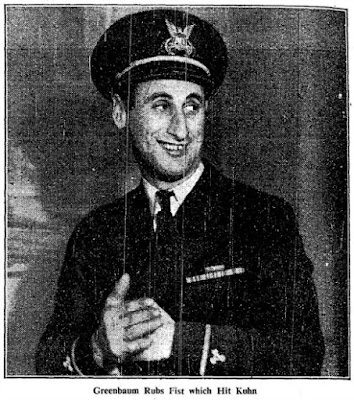 Philip Bump of The Washington Post wrote in 2017 about Isadore Greenbaum:


Shortly after the Loma Prieta earthquake struck the San Francisco Bay area in 1989, the Los Angeles Times spoke with local residents about the likelihood that they, too, would experience a significant quake at some point in the near future.

One man the newspaper spoke with was stoic about the prospect.

“When it comes, it comes. Not much use worrying about it,” local fisherman Isadore Greenbaum told the paper. “I remember when one hit a ways back, some of the people didn’t know what it was, and I told ’em it was just a whale scratching its back.”

What the Times doesn’t seem to have known is that they were speaking with someone with a proven track record of bravery in the face of danger.

Isadore Greenbaum was arrested in 1939 for charging the stage at a rally of 22,000 Nazi sympathizers in the middle of Manhattan, enduring a beating at the hands of the uniformed stormtroopers who were providing security before being dragged away by the police. 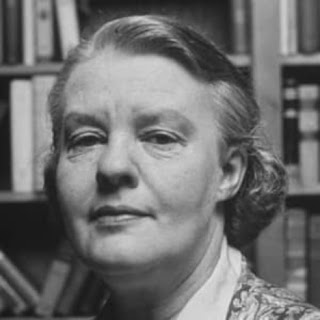 Another historical note: Famed journalist Dorothy Thompson was present at the Bund rally, and at one point was temporarily evicted.

Dorothy Celene Thompson (July 9, 1893 – January 30, 1961) was an American journalist and radio broadcaster, who in 1939 was recognized by Time magazine as being equal in influence to Eleanor Roosevelt.

She is notable as the first American journalist to be expelled from Nazi Germany in 1934 and as one of the few women news commentators on radio during the 1930s. She is regarded by some as the "First Lady of American Journalism."

At the time of the Bund rally, she was married
to Sinclair Lewis, who wrote "It Can’t Happen Here." 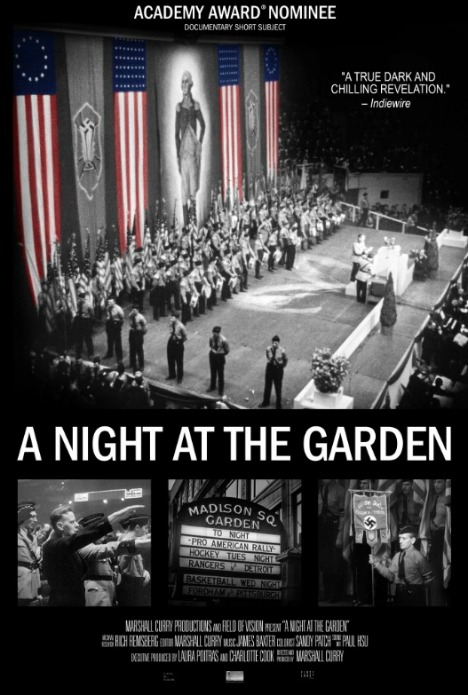