Restored! The City Without Jews

Restoration and Warning: In December 2016, the Film Archive of Austria announced that it managed to reach its funding goal of 75,500 euros (about $80,000) to restore a recently discovered copy of the previously-believed-lost 1924 film The City Without Jews. 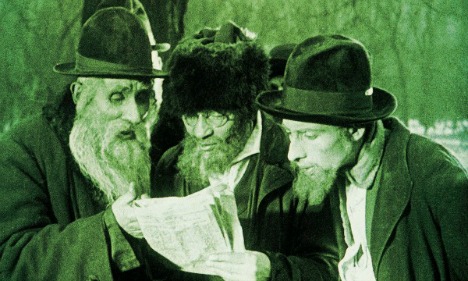 Jonathan Chisdes of ChizFilm Jewish Movie Reviews (see ChizFilm Is Here! and The Wedding Plan in New Mexico!) reported then


“The City Without Jews,”a silent movie based on a dystopian novel written by Hugo Bettauer, was filmed and premiered in Vienna in 1924. It told the story of a fictional anti-Semitic chancellor who expels all the Jews from his city, but then comes to see the error of his ways and eventually invites them to return.

At a time when the Nazi party was banned and Adolf Hitler was still in prison, it seemed an unlikely future, yet the film somewhat accurately predicted the Holocaust (except giving it a happy ending).

Unfortunately, shortly after the film’s premiere, Bettauer was shot and killed by a member of the Nazi party. And after the Nazis came to power and took over Austria, many of the film’s actors either fled the country or were sent to Auschwitz.

After the war, the film was believed lost. In 1991, a partial copy in poor condition surfaced, but last year a complete copy was discovered in a Paris flea market. The Film Archive of Austria raised funds to restore and digitize the film; there is a planned release for next fall.

Abq Jew is happy to tell you that - per The Washington Post and other major news outlets - the film has indeed been restored.


The City Without Jews is now set to tour Europe to serve
as a deliberately eerie, contemporary warning. 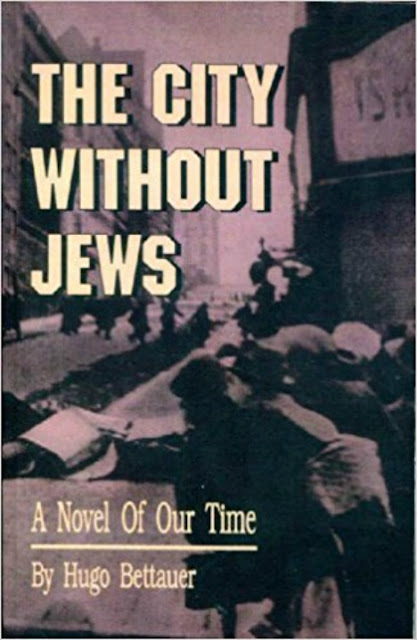 The subtitle of Hugo Bettaur's book, upon which the film is based - A Novel Of Our Time - remains unfortunately true, says Amazon.


Bettauer takes as his subject one of the oldest themes in Jewish history: exile. Exile appears constantly in Jewish literature and history. Written in 1923, the author imagines that anti-Semitism leads Austria to expel all Jews.

He describes the expulsion, but does not linger over the suffering, humiliation, and trauma such expulsions have historically caused.

Families may be split, and lovers torn from each other, proprietors may be forced to sell their businesses at ridiculously low prices, but Bettauer is less concerned with what happens to any one individual than with taking an idea and carrying to its ultimate conclusion no matter how ridiculous it may seem.

This is very much a novel of ideas, not of character. One of the ideas is that the consequences of expulsion are as bad or worse for the country which throws out its Jews as they are for the Jews themselves.

The Washington Post's Rick Noack expands on the eerie timeliness of the story, beginning with the title of his article:

On Monday, thousands marched in London against what they perceive to be blatant anti-Semitism in Britain’s mainstream Labour Party. The same day, the Paris prosecutor’s office said that it was investigating whether anti-Semitism was a motivation for the killing of an 85-year-old Holocaust survivor last week.

Anti-Semitic incidents in schools triggered a quest to find solutions all week in Germany. And in Poland, a renowned anti-racism activist was branded a traitor after speaking out against the nation's controversial anti-defamation law concerning Holocaust complicity.

It’s against this backdrop that producers of a newly restored 1924 Austrian movie want their work to be seen.

And - The Washington Post also provided a few snippets of The City Without Jews, with English subtitles!


Sarah Rose Sharp wrote about The City Without Jews in Hyperallergic, "a forum for serious, playful, and radical thinking about art in the world today." Founded in 2009, Hyperallergic is headquartered in Brooklyn, New York.

The City Without Jews was once considered lost forever. But in 2015, at a flea market in Paris, a collector unexpectedly discovered a complete copy of the film.

In the black and white footage of a silent film, Austrian Jews are harassed in the public market, physically menaced by thugs in the street, and forced en masse from the country, on foot or by train. Orthodox men, distinguished by their prayer shawls, payot, and traditional dress, carry Torah scrolls. The expulsion of Jews rips mixed-faith families in two.

Familiar though this story may seem, these scenes are not taken from history. They come from a long-lost film that predates the Nazi period by a decade, Die Stadt Ohne Juden (The City Without Jews). Released in 1924, it was adapted from a satirical novel by Hugo Bettauer, an Austrian Jewish writer and journalist.

At a time when Hitler was still a marginal figure, Bettauer was a vocal proponent of liberal views, including tolerance of homosexuals, education for women, and reduced punishments for those who received abortions — and, of course, the condemnation of anti-Semitism. The film portrayed the targeting of Austria’s Jews as a dystopian future.

And of the film's unimaginable rediscovery and restoration, Ms Sharp tells us


“The newly found material includes the lost ending of the film, while other new sequences found reveal an obviously dramaturgically staged parallel narrative,” Larissa Bainschab, a press officer at the Austrian Film Archive, told Hyperallergic in an email.

“Previously unknown images show Jewish life in Vienna and attacks against them. The expressionist scene featuring Hans Moser [a famous Austrian actor] in the role of a ruthless anti-Semite is now available in its entirety for the first time.

All in all, the political message of the film and the depiction of murderous anti-Semitism in Vienna in the 1920s are now significantly more sharply articulated.”

Today we Jews around the world gather
to commemorate Yom HaShoah ve-HaGevurah,
the Day of the Holocaust and the Heroism.
And we remember those we lost,
whose worlds were stolen from us.

If you'd like to see the entire film The City Without Jews,
Abq Jew has discovered this video on YouTube.
The film is in German, here with English subtitles.
But it's not that difficult to follow the action and understand the story.

Chizfilm is proud to have contributed to this restoration campaign!