The Wintergatan Marble Machine: At first, Abq Jew was going to write about Donald Trump and The Jews. But that topic is just way too depressing, and "inappropriate"  - remember when it wasn't inappropriate to use the word "wrong"? - for Erev Shabbat.

How about Ivanka? Someday she and husband Jared Kushner - both observant Jews! - may be our best defense against the Trumpocalypse.

No, Abq Jew is just not ready for that Purimspiel. 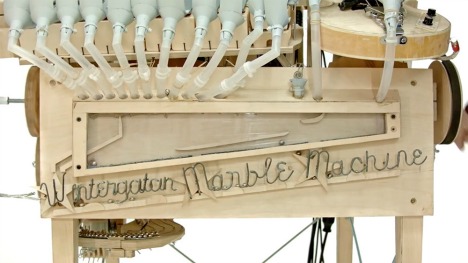 So how about the Wintergatan Marble Machine?

The video has been going around the Internet for a few days. ICYMI - here is what the website This Is Colossal says about it.


Swedish musician Martin Molin has long had experience with esoteric instruments like the glockenspiel, traktofon, or Theremin, but he may have topped his musical prowess with the invention of his own new instrument: the Wintergatan Marble Machine, a hand-cranked music box loaded with instruments including a circuit of 2,000 cascading steel marbles.

As the devices cycles it activates a vibraphone, bass, kick drum, cymbal and other instruments that play a score programmed into a 32 bar loop comprised of LEGO technic parts. The marbles are moved internally through the machine using funnels, pulleys, and tubes.

Molin began work on the marble machine in August 2014 and hoped to spend about two months on the project. Its complexity soon spiraled out of control as all 3,000 internal parts had to be designed and fabricated by hand, a time-consuming process that eventually took 14 months.

An early version was designed using 3D software, but it was easier for Molin to create parts on the fly leading to it’s Frankenstein appearance. The musician shared much of his progress in regular video updates that he shared on YouTube.

As Abq Jew pointed out in A Bessing for Bezalel, there appears to be no blessing in the Jewish canon for hearing good music played well - by human or machine.

But it may (Abq Jew is not a rabbi; see Wanna Be A Rabbi?) be appropriate to recite this bracha if you happen to meet Martin Molin:


Upon seeing a wise man distinguished for other than Torah knowledge: one recites " ... who has given of his wisdom to flesh and blood (שׁתן מחכמתו לבשׂר ודם)."