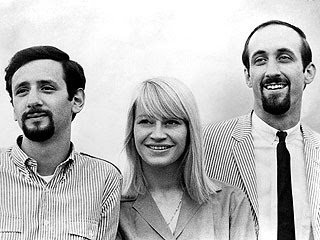 1.
Based upon all that you have read in this blog post -
to what great historical event may the formation of
Peter, Paul and Mary as a folk group be compared?
Explain.

First, a little (very little) history about the formation of Peter, Paul and Mary. It all started with Peter Yarrow, as Wikipedia tells us:

The experience of performing in front of a large audience was a thrilling one for Yarrow, who discovered he loved it. He branched out to lead community sings on weekends.

Upon graduation he played in folk clubs in New York City, appeared on the CBS television show, Folk Sound USA, and the following summer performed at the Newport Folk Festival, where he met manager and musical impressario [Albert] Grossman.

One day, the two were at Israel Young's Folklore Center in Greenwich Village discussing Grossman's idea for a new group that would be "an updated version of the Weavers for the baby-boom generation ... with the crossover appeal of the Kingston Trio".

Yarrow noticed a picture of Mary Travers on the wall and asked Mr. Grossman who she was.

“That’s Mary Travers,” Grossman said. “She’d be good if you could get her to work."

The lanky, blonde Kentucky-born Travers was well connected in Greenwich Village folk song circles. While still a high school student at the progressive Elizabeth Irwin High School she had been picked out by Elizabeth Irwin's chorus leader Robert De Cormier to sing in a trio called The Song Swappers, backing up Pete Seeger in the 1955 Folkways LP reissue of the Almanac Singers' The Talking Union and two other albums.

As well as performing twice with Seeger at Carnegie Hall, Travers had also played a folksinger in a short-lived Broadway play called The Next President, starring satirist Mort Sahl, but she was known to be painfully introverted and loath to sing professionally.

To draw her out, "Mr. Yarrow went to Ms. Travers's apartment on Macdougal Street, across from the Gaslight, one of the principal folk clubs. They harmonized on 'Miner's Lifeguard', a union song, and decided that their voices blended.

To fill out the trio, Ms. Travers suggested Noel Stookey, a friend doing folk music and stand-up comedy at the Gaslight."

They chose the catchy "Peter, Paul and Mary" as the name for their group, since Noel Stookey's middle name was Paul, and rehearsed intensively for six months, touring outside New York before debuting in 1961 as a polished act at The Bitter End nightclub in Greenwich Village.

The rest, as they say, is history. Or, as Abq Jew prefers to call it, History.

So, to what great historical event may the formation of Peter, Paul and Mary as a folk group be compared?

Here are a few possibilities, based upon the scores of responses Abq Jew did not receive in response to Dissecting Stewball.

Paul Simon and Art Garfunkel grew up in the 1940s and 1950s in the predominantly Jewish neighborhood of Forest Hills in Queens, New York, just three blocks away from one another, and attended the same schools, Public School 164 in Flushing, Parsons Junior High School, and Forest Hills High School.

Individually, when still young, they developed a fascination with music; both listened to the radio and were taken with rock and roll as it emerged, particularly the Everly Brothers.

When Simon first noticed Garfunkel, he was singing in a fourth grade talent show, and Simon thought that was a good way to attract girls; he hoped for a friendship which eventually started in 1953 when they were in the sixth grade and appeared on stage together in a school play adaptation of Alice in Wonderland.

That first stage appearance was followed by the duo forming a street-corner doo-wop group, the Peptones, with three other friends, and learning to harmonize together. They began performing for the first time as a duo at school dances.

They moved to Forest Hills High School in 1955,[14] where, in 1956, they wrote their first song, "The Girl for Me"; Simon's father sending a handwritten copy to the Library of Congress to register a copyright.

While trying to remember the lyrics to the Everly's song "Hey Doll Baby", they created their own song, "Hey Schoolgirl", which they recorded themselves for $25 at Sanders Recording Studio in Manhattan.

While recording they were overheard by a promoter, Sid Prosen, who – after speaking to their parents – signed them to his independent label Big Records.

Other possibilities for Meetings of Two: Ferrante and Teicher; Rocky and Bullwinkle.


After (actually before) the meeting of Peter, Paul, and Mary, the Greatest. Meeting of Three. Ever. was surely that of The Limeliters. Wikipedia tells us:


The Limeliters are an American folk music group, formed in July 1959 by Lou Gottlieb (bass violin/bass), Alex Hassilev (banjo/baritone), and Glenn Yarbrough (guitar/tenor). The group was active from 1959 until 1965, when they disbanded.

After a hiatus of sixteen years Yarbrough, Hassilev, and Gottlieb reunited and began performing again as The Limeliters in reunion tours. On a regular basis a continuation The Limeliters group is still active and performing.

Gottlieb died in 1996 and Hassilev, the last founding member who had remained active in the group, has retired, leaving the group to carry on without any of the original members.

Gottlieb, fresh from obtaining his Ph.D in musicology, was in the audience when Alex Hassilev and Glenn Yarbrough appeared on stage to sing a duet together. Gottlieb, who was then working as an arranger for The Kingston Trio, originally thought that "these two guys" could help him make some demos for the Trio.

Soon, they packed up and headed to Aspen, Colorado, to work at a club called "The Limelite," which Yarbrough and Hassilev had purchased after singing there during the previous ski season.

After a short period of perfecting their act, they set off for the "hungry i" in San Francisco, which at the time was the California nerve center for the mushrooming contemporary folk movement.

The owner had just had a group with three long names strung together and wasn't about to put "Yarbrough, Hassilev, and Gottlieb" up on the marquee. But the group had not yet decided on a name. They chose "The Limeliters".

Their success was immediate. Only two days after their professional debut, the group received offers from three recording companies. In early 1960 they released their first album on Elektra. Soon after they signed with RCA Victor and a string of best selling albums followed.

Other possibilities for Meetings of Three: The Kingston Trio; The Chad Mitchell Trio; DreamWorks SKG; The Yalta Conference.

In March 1957, John Lennon, then aged sixteen, formed a skiffle group with several friends from Quarry Bank school. They briefly called themselves the Blackjacks, before changing their name to the Quarrymen after discovering that a respected local group was already using the other name.

Fifteen-year-old Paul McCartney joined as a rhythm guitarist shortly after he and Lennon met that July. In February 1958, McCartney invited his friend George Harrison to watch the band. The fourteen-year-old auditioned for Lennon, impressing him with his playing, but Lennon initially thought Harrison was too young to join them. After a month of Harrison's persistence, they enlisted him as their lead guitarist.

[Producer George] Martin's first recording session with the Beatles took place at EMI's Abbey Road Studios in London on 6 June 1962. Martin immediately complained to Epstein about Best's poor drumming and suggested they use a session drummer in his place. Already contemplating Best's dismissal, the Beatles replaced him in mid-August with Ringo Starr, who left Rory Storm and the Hurricanes to join them.

It’s a phrase that makes most people’s hearts sink. It echoes with boredom, frustration and a general waste of valuable time. And yet, we all know you can’t manage without meetings.

A team isn’t a team unless we all get together to discuss problems, share ideas and come to decisions. And while they continue to take place "face to face" we are increasingly using technology to meet with colleagues online as "virtual teams".

The answer of course is to have efficient, effective and productive meetings but we all know that’s easier said than done. A recent survey revealed that 49% of managers felt they were wasting at least 3 hours a week in meetings. And 21% believed that 4 out of 5 meetings were a total waste of their time.

Indeed, a meeting is often the only time the whole team comes together and is the only place where the leader is seen as a leader rather than "the official" individuals report to. If they feel like their time has been wasted, they lose respect not just for the leader but also for the wider organization that put that leader in place.

However many leaders aren’t even aware that running meetings is a teachable, learnable skill. But of course, it’s not a gift, it’s a technique. In fact, a technique with five key elements that applies to both face to face and virtual meetings.

[In Meetings Bloody Meetings 2012,] John Cleese returns in the classic role of the Judge and demonstrates how the rules for running a meeting parallel those of a court.

Abq Jew must (he must! he must!) tell you that he is a big fan of the now classic 1976 version of Meetings Bloody Meetings, which he deployed with some success at Lucent Technologies at the turn of the century. At least we all had a few good laughs before the layoffs.

In case you get lost - or in case the MBM folks decide to vigorously enforce their copyrights - you may find additional links to the 1976 version here and here and here; and to the 2012 version here. Otherwise -

But we don't have to worry about business meetings for a while!

Happy Labor Day!
Remember how we got here!