For the Midrash, the thornbush symbolizes Israel's experience in Egypt [and many other situations in life]. It is easier to put one's hand into a thornbush than to extricate it; so Israel's arrival in Egypt was comfortable compared to the difficulties and pain of their departure [Mekh of bar Yohai].


It has been suggested by some commentators that the thorn bush had been burning for quite some time; a number of people had seen it and just kept on walking.

What distinguished Moses was that when he saw the burning bush, he recognized it as something unusual, something special, and he stopped what he was doing and turned aside to investigate and to try to understand this strange phenomenon.

Now, the Torah doesn't talk about a sneh - it talks about the sneh, like there was only one, a semantic idiosyncracy that doesn't seem to bother Rashi or any of the traditional commentators.

The sneh was not, for example, on any of Pirke Avot's Avot's list of Ten Things Created on the Eve of the First Shabbat. 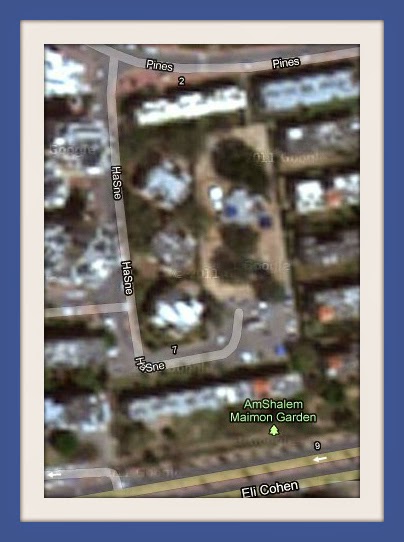 But the sneh has always held special meaning for Abq Jew.

For it was on Simtat HaSneh ("Thornbush Lane") in Ashkelon that Abq Jew's parents, of blessed memory, resided in a two-bedroom, third-floor walkup during 1970-73, during part of which time (it's complicated) Abq Jew was attending The Technion in Haifa.

But Abq Jew's Biblical Hebrew was non-existent way back then. He didn't come to realize what a sneh was until 1975, when he arrived at The Jewish Theological Seminary of America and took careful note of their logo. 
Why, you may (or may not) ask,
didn't Abq Jew become a rabbi?
Did he not get the call? Did he not recognize the call?

Why didn't he?  Somewhere along the way, Abq Jew found out that the rabbi has to sit on the bimah for the entire day of Yom Kippur - all the services, all the prayers, all the cantorial ... stuff. Sometimes with a choir.

That's the story Abq Jew has told for the past thirty-odd years. But the truth is - he couldn't get past the Jewish Theological Seminary's in-person Talmud entrance exam, administered by Rabbi Saul Lieberman, of blessed memory.

Rabbi Lieberman was such a formidable scholar that ... when he went to interview at JTS, he was warned: "Don't tell them you know the entire Babylonian Talmud by heart." Sure enough, when asked about the extent of his learning, Rabbi Lieberman claimed to know only half the Talmud. "Which half do you know?" he was asked. And Rabbi Lieberman responded: "Which half would you like to hear?"

Abq Jew profoundly and profusely apologizes.  It's an old joke - and  my rabbinical school colleagues, many of whom went on to brilliantly successful careers, swore (Billy Nader) it really happened.  But the truth is - it took smarts and "background" and sitzfleisch to become a rabbi, especially at the Seminary, especially in those years.

Let it be noted that Abq Jew's fateful JTS Talmud encounter with Rabbi Lieberman, of blessed memory, was one of the Rabbinical School entrance requirements, which Abq Jew had never completed. Since Abq Jew was never formally admitted, he cannot be a compleat, honest-to-G-d Rabbi School Dropout.

But Abq Jew can certainly like the song. It's from Pizmon's third album, Greensleeves, and is set to the tune of Beauty School Dropout, from the musical Grease. Some Pizmon albums are available at CDbaby.com.

And if you want a tongue-firmly-in-cheek tale of What Really Happened - you should definitely go see Into the Woods! It's terrific! Or - you could see Who is Abq Jew?

Your story's sad to tell, a Yiddish ne'er do well
Most farblundgent Jewish soul on the block
Your future's so unclear now, what's left of your career now
Can't even get a trade-in on your Tanach

Hey Yid get moving, to yourself don't be a tease
What are you proving, you've got the seichel but no kishkes
If you go for your smicha you're just being a nincompoop
Turn in your Talmud Bavli, go back to law school

Chabibi don't sweat it, you're not cut out to play this tune
Better forget it, who wants a shiur from a shmagoon?
Now, you love your Bubbe, you love your Zeyde, but still the world is cruel
Wipe off that holy face and go back to law school

Hey you don't blow it, please take the good advice I've sent
Baby you know it, even though you're so farklempt
I've told you what to do, so listen you, I've really got to fly
Gotta be going to that Beis Midrash in the sky