The Origin of Nuclear Medicine: Dr Saul Hertz (1905-1950) discovered radioactive iodine as a tracer / diagnostic tool, and as a therapy for Graves disease and  thyroid cancer.

Radioactive iodine (RAI) is the first targeted cancer therapy.  Dr Hertz established a cornerstone of Nuclear Medicine as being the first and foremost person to develop the experimental data on RAI and apply it to the clinical setting.

The exhibit will include vivid images, vintage newspaper articles, historical letters detailing this medical revelation- and much more - to provide an in-depth look at the work of a Jewish doctor whose medical discovery transformed the world of medicine during an extremely challenging time of racism, fear of nuclear medical applications and economic pressures. 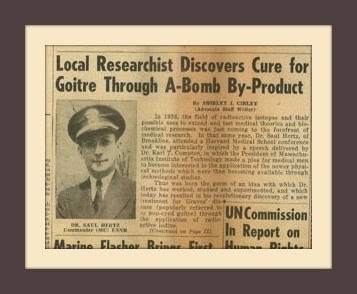 Here is more of Dr Hertz's bio, from SaulHertzMD.com:


Dr. Hertz was born to Orthodox Jewish immigrant parents in Cleveland, Ohio on April 20, 1905. He received his A.B. from the University of Michigan in 1925 with Phi Beta Kappa honors.

After graduating from Harvard Medical School in 1929 he fulfilled his internship and residency at Mt. Sinai Hospital in Cleveland. He then joined the Thyroid Clinic at Boston's Massachusetts General Hospital serving as Chief of the Thyroid Unit from 1931 - 1943.

On November 12, 1936 Dr. Karl Compton, president of the Massachusetts Institute of Technology, spoke at a luncheon lecture. His topic was "What Physics can do for Biology and Medicine."

A collaboration between Dr. Hertz (MGH) and Dr. Arthur Roberts, a physicist of MIT, was established. In late 1937, early experiments involving 48 rabbits demonstrated that the normal thyroid gland concentrated Iodine 128, and the hyper plastic thyroid gland took up even more Iodine.

In January of 1941, Dr. Hertz was the first to administer radioactive iodine at the Massachusetts General Hospital that lead to a series of twenty-nine patients with hyperthyroidism. This proved to be a success.

After serving in the Navy during World War II, Dr. Hertz wrote to the director of the Mass General Hospital in Boston, Dr. Paxon on March 12, 1946, "it is a coincidence that my new research project is in Cancer of the Thyroid, which I believe holds the key to the larger problem of cancer in general."

In 1946, Dr. Hertz established the Radioactive Isotope Research Institute, with a major focus on the use of fission products for the treatment of thyroid cancer, goiter, and other malignant tumors. He went on to research the influence of hormones on cancer.

Dr. Hertz's use of radioactive iodine as a tracer in the diagnostic process, as a treatment for Graves' disease and in the treatment of cancer of the thyroid remain the preferred practices. 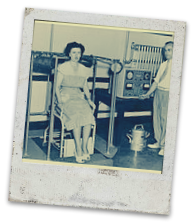 Currently housing such artifacts as the first gamma camera used on human beings, the Museum hopes to expand this exhibition - focusing on nuclear medicine - while also solidifying it as a source of pride for our local medical community.

Click here to learn about additional events associated with this exhibit. Click here for a nice video that explains it all.