Oy Vey!  You know you can find just about everything you're looking for - and plenty you're not - on the Internet these days.  While looking for something else (of course), Abq Jew discovered this Yiddish rendition of "Rudolph the Red-Nosed Reindeer". 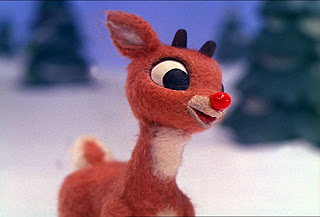 Which is really quite charming and irresistible.  So -


And how about Dasher, Dancer, Prancer, Vixen, Comet, Cupid, Donner, and Blitzen?  What are they - chopped liver?  No - they are the bullies who "never let poor Rudolph join in any reindeer games."  Abq Jew has always wondered about this verse.  What, exactly, are reindeer games?

After pondering for years, Abq Jew has finally figured this out.

Rudolph was, literally, the odd reindeer out.  He was Number 9.  Bridge partners had been determined long before Rudolph showed up.  Any other reindeer games also paired opponents - with no place for Rudolph.  Even a tennis tournament would have no way to fit Rudolph in.  Unless the other reindeer learned some new games - they could all go bowling! or start their own baseball team! - Rudolph was left out of the fun.

To Abq Jew, this makes Rudolph the Jewish Reindeer.

And - you remember the story? - it turns out that Rudolph has yichus, and he ends up out in front of Dasher, Dancer, Prancer, Vixen, Comet, Cupid, Donner, and Blitzen.  Case closed.