Northumberland UK:  Among the delightfully pleasurable activities in which Abq Jew & family engaged during their recent return trip to New Jersey was this - a visit to the Montclair Art Museum.

First of all, the Museum has a very nice collection of Native American Art on permanent display - so we felt right at home (even a bit homesick). According to the Museum's website:


The Native American collection was initiated by Mrs. Henry Lang, one of the founders of the Museum. It represents the cultural development of various peoples from the seven major culture areas in the United States--the Northwest Coast, California, the Southwest, the Plains, the Woodlands, the Southeast, and the Arctic.

With more than 4,000 objects, the collection has particularly distinguished examples of basketry and jewelry. Contemporary artists such as Dan Namingha, Tony Abeyta, Jaune Quick-To-See Smith, and Allan Houser are represented as well. Native American artists and artisans are frequent visitors to the Museum, offering talks and demonstrations.

But the Museum has also expanded its collection of Modern and Contemporary Art with a new series called New Directions.  The first artist on the roster is Marina Zurkow, whose Friends, Enemies, and Others digital animations were wonderfully captivating. According to the Museum's website:


Zurkow makes psychological narratives about humans and their relationship to animals, plants, and the weather. These take the form of multichannel videos, customized multiscreen computer pieces, animated cartoons, interactive mobile works, and pop objects. With these works, Zurkow seeks to spur a conversation around the relationship between nativist views toward invasives and anti-immigrant rhetoric.


Ms Zurkow's most interesting work (in Abq Jew's humble and completely unqualified opinion) was a 146-hour digital animation entitled Mesocosm (Northumberland UK).  No, Abq Jew was not able to view the entire 146 hours - but he wishes he could have.  Ms Zurkow's website (where you can view a snippet of the work) states: 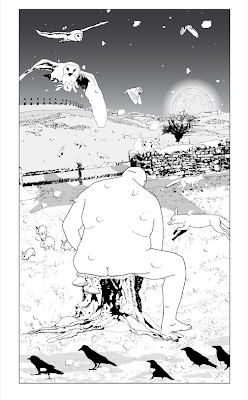 Mesocosm (Northumberland UK) is an animated landscape portrait representing one year of real time on the moors of Northumberland. In a 146-hour cycle that unfurls in a choreographed sequence of chance, animated objects are placed on a stage, and code determines the frequency and order of their appearance. No cycle is identical to the last, as the appearance of characters and seasonal weather are determined by a simple probability equation. One hour of world time elapses in each minute of screen time: Seasons unfold, snows fall, days pass, moons rise, animals come and go, and the omnipresent man in the garden (based on a painting of Leigh Bowery by Lucien Freud), both corporeal and a magical source of food, offers his body to nourish the garden feeders. Real, mythical and man-made elements interact as they cross the stage of this British landscape, in an expanded view of what constitutes "nature."

Conceived during a 2009 research residency at ISIS Arts, Newcastle and based on the Northumbrian landscape, Mesocosm (Northumberland UK) will be seen by commuters (or loiterers) in public space, where one might become invested in the fate of the protagonists on a summer’s eve, and be surprised 72 hours later when it’s snowing and the animated field is full of refugees.

Friends, Enemies, and Others will be on exhibition through March 18, 2012.  Although traveling via EWR (Newark Liberty International Airport) is nothing at all like traveling via ABQ - Mesocosm is worth a trip to the Garden State!