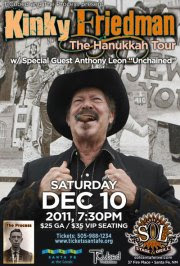 is Coming to Santa Fe!

Kinky Friedman of the Texas Jewboys, dozens of best-selling books and Texas politics, is back on the road this holiday season, with his Hanukkah Tour of 2011. Taking time off from working on a book with Billy Bob Thornton, and formulating one with Willie Nelson, KInky will be visiting fourteen cities, midwest, west and southwest, starting on November 29th. The Kinkster will hit Santa Fe for his first appearance there in decades on Saturday, December 10th, as TCubed Productions and The Process host him at Santa Fe Sol.

The Kinkster, who first hit the limelight with his outrageous Texas Jewboys and later toured with the Bob Dylan Rolling Thunder Review, has won international acclaim for his series of detective novels, in which he is the detective, and subsequent novels filled with his offbeat humor and dazzlingly beautiful remembrances from his colorful life. He has recently been buying back his novels from his publishers, re-releasing them on line and in audio form. Of course, the Kinkster prefers reading his books, himself, so the audio books are very hot right now. Oddly, and poetically, Kinky eschews the computer completely and considers the internet "Satan's work." He still spits out his works on his Underwood portable electric typewriter.

Kinky will be performing solo, singing all the tunes for which he is famed, including 'They Ain't Makin' Jews Like Jesus Anymore,' and 'Ride 'Em Jewboy,' and, naturally, he will continue his long-running commentary on current politics and the state of the union, as well as give a reading from one of his recent books.

And like any good Jewish troubadour, Kinky will be selling his latest book, hawking tour posters and touting the impending arrival of perhaps the kinkiest of new Kinky products, high grade, top shelf tequila. An official signing party will occur after the performance, at which Kinky vows he "will sign anything but bad legislation." Rumor has it Kinky's favorite Kinky product, his Kinky cigars, will also be available for purchase.

For further info on the Hanukkah Tour, visit www.kinkyfriedman.com.