The Importance of Banjo 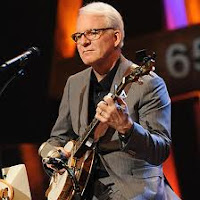 Could there be anything more important than the banjo?  Abq Jew doesn't think so.

Neither does Steve Martin - yes, that Steve Martin, the comedian and writer, famous again, this time for his banjo work with the Steep Canyon Rangers.

And neither does PBS - yes, that PBS, home of Masterpiece Theater, Antiques Roadshow, Frontline, and Nova.

You, too, will undoubtedly be thrilled to learn that PBS, The Banjo Project, and Steve Martin have combined to produce


Give Me the Banjo!
The Story of America's Instrument

Narrated by Steve Martin, Give Me the Banjo brings together contemporary players - including Pete Seeger, Earl Scruggs, Bela Fleck, Mike Seeger [of blessed memory], Don Vappie, Abigail Washburn and The Carolina Chocolate Drops - with folklorists, historians, instrument makers and passionate amateurs to tell the story of America's instrument in all its richness and diversity.

You can view the entire program (you know you'll want to) right here.  But, Abq Jew suspects, some of you may be asking - is the banjo good for the Jews?  See below.


Watch PBS Arts from the Blue Ridge Mountains: Give Me the Banjo on PBS.  See more from PBS.


YES, the banjo is good for the Jews!

In fact, the banjo has been very, very good for some Jews - such greats as Bob Yellin, Pete Wernick, and Eric Weissberg (Dueling Banjos) immediately spring to what's left of Abq Jew's mind.

For those who still do not believe that the banjo is a Jewish instrument, I offer but one example of MOT proficiency: Russian Around, by Bob Yellin of the Greenbriar Boys. As it turns out, Bob and Abq Jew are not related - but boy, was he a powerful influence on Abq Jew's banjo playing!  When he heard Abq Jew play (at Kibbutz Ein Dor in Spring 1971), Bob right away gave Abq Jew the best advice he ever received from a fellow musician: