Braving the Swimming Pool: As Abq Jew mentioned just a couple of years ago (see Swimming With Nachshon), we Jews remember the bravery of Nachshon ben Aminadav as we observe the Seventh Day of Passover.

On the Seventh Day of Passover - the anniversary of the day when this glorious event happened - we again read the story of the Crossing of the Red Sea and the ensuing celebrations.

While everyone who has seen The Ten Commandments knows that Moses and his staff (including The Holy One, Blessed Be He) parted the waters of the Red Sea - we Jews also remember Nachshon, who was the first to step in when the Egyptians were chasing us.

And Nachshon didn't just stick a toe in. He continued walking until the water was up to his neck. Then and only then did the Red Sea part, allowing us Children of Israel to cross on dry land. 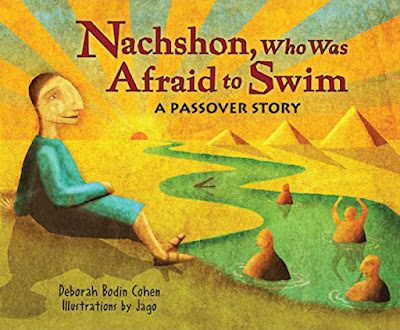 No swimming required.
Nevertheless, Abq Jew is convinced that Nachshon knew how to swim. Why? First of all - because it says in the Talmud (Kiddushin 29a) that

Our Rabbis taught: A father has the following obligations towards his son: to circumcise him, to redeem him, if he is a firstborn, to teach him Torah, to find him a wife, and to teach him a craft or a trade. And there are some who say that he must also teach him how to swim.

Although the Oral Torah was not written, Moshe Rabbenu taught all of it in his court to the seventy elders... To Joshua, his servant, Moses transmitted the Oral Torah and instructed him on it....

This summer I swam in a public place
And a reservoir to boot
At the latter I was informal
At the former I wore my suit
I wore my swimming suit, yeah

The Swimming Song is here performed by the Canadian yet so wonderful Kate & Anna McGarrigle, from their first album. The song was written by Kate's (z"l) then-husband, Loudon Wainwright III.

Yes, that's the same guy who Abq Jew is sure that you, his loyal readers, remember from his 2012 blog post Dead Skunk in the Middle of the Road.

Yes, Loudon Wainwright III wrote that classic song, too. You can view it here.