Baruch Dayan Emet | Nishmato Eden: Could the announcement of our new President-elect and Vice President-elect have been more bittersweet? As we American Jews (by an outstanding 56% margin) shouted Mazel Tov as we made Kiddush, we learned of the death of Rabbi Lord Jonathan Sacks. 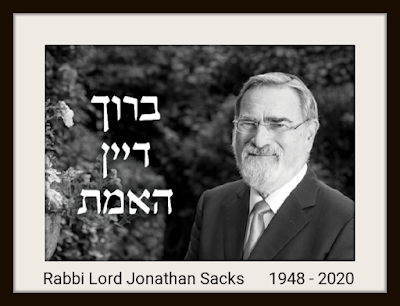 For those who may not be familiar with Rabbi Lord Sacks' life and work, Wikipedia tells us:

He served as the Chief Rabbi of the United Hebrew Congregations of the Commonwealth from 1991 to 2013. As Chief Rabbi, Sacks formally carried the title of Av Beit Din (head) of the London Beth Din. At the time of his death, he was the Emeritus Chief Rabbi.

After stepping down as Chief Rabbi, in addition to his international travelling and speaking engagements and prolific writing, Sacks served as the Ingeborg and Ira Rennert Global Distinguished Professor of Judaic Thought at New York University and as the Kressel and Ephrat Family University Professor of Jewish Thought at Yeshiva University.

He was also appointed as Professor of Law, Ethics, and the Bible at King's College London. He won the Templeton Prize (awarded for work affirming life's spiritual dimension) in 2016. He was also a Senior Fellow to the Raoul Wallenberg Centre for Human Rights.

Rabbi Jonathan Sacks, the former chief rabbi of the United Kingdom whose extensive writings and frequent media appearances commanded a global following among Jews and non-Jews alike, has died.

Sacks died Saturday morning at age 72, his Twitter account announced. He was in the midst of a third bout of cancer, which he had announced in October.

Sacks was among the world’s leading exponents of Orthodox Judaism for a global audience. In his 22 years as chief rabbi, he emerged as the most visible Jewish leader in the United Kingdom and one of the European continent’s leading Jewish voices, offering Jewish wisdom to the masses through a regular segment he produced for the BBC.

He had a close relationship with former British Prime Minister Tony Blair, who called Sacks “an intellectual giant” and presented him with a lifetime achievement award in 2018.

Sacks was also an immensely prolific author, addressing pressing social and political issues in a succession of well received books. His popular commentary on the prayer book, published by Koren, helped to dethrone the more traditionalist Artscroll Siddur as the preeminent prayer book in American Modern Orthodox synagogues.