Not Your Average Holocaust Survivor: We - the New Mexico Jewish community - lost a good one last week. Abq Jew is keeping score these days, and we are running out of living Holocaust survivors, witnesses, and educators. 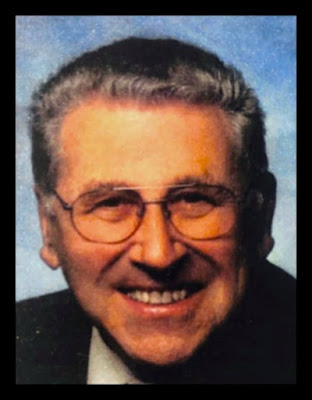 Abq Jew did not have the pleasure and honor of knowing Mr Gellert personally. And - as it turns out - Abq Jew was only aware of a small portion of what Mr Gellert had accomplished during his lifetime.

Which included, of course, the co-founding of the


Abq Jew learned even more about Werner Gellert from - where else? - his obituary. Written by Mr Gellert's daughter, Julie Gellert, this appeared in the Albuquerque Journal on  November 13, 2019.

As you may know, Abq Jew seldom copies entire articles from the Web.
But this obituary is special. What a story!


For my father, Werner Gellert, there was no more important mission in life than eradicating hatred from the world, one person or classroom at a time. This desire to increase tolerance wherever he went stemmed from his experiences during the Holocaust and as a refugee in Shanghai, China, as well as the pervasive bigotry that he experienced once he came to America.

Mr. Gellert was born in Breslau, Germany on June 14, 1926. Following Kristallnacht, otherwise known as the "Night of Broken Glass," a time when the Nazis went on a rampage against the German Jews, he and his adopted parents escaped Germany and became stateless refugees in Shanghai.

In 1943, the Japanese, who occupied Shanghai and were allied with the Germans, forcibly displaced 18,000 of the Shanghai Jews, including Mr. Gellert and his adoptive parents, to a ghetto in an area known as Hong Kew, or the "Restricted Zone". Although Hong Kew had better conditions than the Nazi concentration camps, it was still rife with disease and starvation.

On one of his birthdays during his time in Hong Kew, all Mr. Gellert wanted was a loaf of bread and a jar of jam all to himself - a wish that was not fulfilled. Indeed, Mr. Gellert experienced severe starvation while in the Hong Kew ghetto and survived such diseases as typhus, yellow fever, and serum hepatitis.

While living in the ghetto, Mr. Gellert had several confrontations with the chief of police of the Restricted Zone, a man known only as "Mr. Ghoya," a pugnacious individual who was known for his instability and violent flights of temper. During one of these confrontations, Ghoya hit Mr. Gellert in the eye, causing him to permanently lose most of the sight in that eye.

After the war, Mr. Gellert remained in Shanghai, where he worked for the American Army as a typewriter repairman. When the army realized the extent of Mr. Gellert's intelligence and linguistic skills (he spoke seven languages, including the Shanghai dialect of Chinese), they recruited him into Army Intelligence as a civilian consultant.

While in post-war China, Mr. Gellert worked undercover as a member of the Army Graves Patrol, gathering intelligence as he visited various areas in China, Tibet, and the Philippines. His time spent at a Tibetan Buddhist monastery made such an impression on him that he integrated many Buddhist beliefs into his Judaism.

Once the Chinese Cultural Revolution was in full swing, Mr. Gellert and his adoptive parents escaped Shanghai on the last boat out to the United States. They settled in Denver, where Mr. Gellert attended Denver University, where he met his future wife, Frances Silverman, on a blind date. They would go on to be married for 54 years.

Mr. Gellert later attended Hebrew University in Los Angeles with the goal of becoming a Reform rabbi. He led the congregation of the Downey Temple for a year as a student rabbi.

Although a serious illness related to the hepatitis he had contracted in China kept him from completing his rabbinical studies, he was considered an honorary rabbi and served in that capacity at the Jewish Home for the Aged in Reseda, CA and, later, at Temple Albert in Albuquerque, NM.

Once he recovered from his illness, Mr. Gellert began to work for the savings and loan industry. He continued to work in that field until the mid-1980s.

Mr. Gellert believed that education is the best antidote to hate. With this in mind, he and Frances went on to found the Albuquerque Holocaust and Intolerance Museum and Study Center in 2001. Like the Albuquerque Holocaust Memorial, the museum educates attendees not only about the Holocaust, but also other forms of physical and cultural genocide, such as the Armenian genocide and Indian boarding schools in America.

For as long as he was physically able, which was well into his eighties, Mr. Gellert frequently spoke to school groups that attended the museum about his experiences during the Holocaust and his time as a refugee in Shanghai. He discussed the destructiveness of hate and the importance of tolerance. He also traveled around New Mexico educating students about hate and tolerance.

Mr. Gellert is survived by his daughter, Julie Gellert, and his grandson, Brandon Ligon, who both reside in Arizona.