Four Videos and an Inauguration

Four Years: On January 20 2017 - a date which will live in ... perplexity and despair, @realDonaldTrump will, if all goes as planned (Abq Jew cannot in good conscience say "if all goes well"), become the next President of the United States of America.

To which Abq Jew responds, in a clear, bold statement with which he is sure we all can agree

For his sanity (what little remains) Abq Jew is meshuggeh to offer four recent videos that frame our times and capture the true gestalt of the political moment.

1. Remember That We Suffered

Yes, The New York Times (!) alerted Abq Jew that Patti LuPone would play a rabbi on the Friday the 13th (wouldn't you know) episode of CW's Crazy Ex-Girlfriend, titled Will Scarsdale Like Josh's Shayna Punim?, in which


the lovelorn title character Rebecca (Rachel Bloom) attends a bar mitzvah with Josh, her ex-boyfriend, that’s presided over by her childhood rabbi. Nothing strange there. But when it’s the Tony Award-winning actress Patti LuPone under the skullcap — with the Tony nominee Tovah Feldshuh slaying an imaginary hora as Rebecca’s mother — well, that’s where things start to get funny.

In the episode, Ms. LuPone and Ms. Feldshuh lead a klezmer-crazy musical number called “Remember That We Suffered,” about a Jewish taste for basking in horrors past. Much to Rebecca’s obvious discomfort, the lyrics at the top of the song set the cheerily misfortunate mood right away:

Nights like these are filled with glee
Noshing, dancing, singing, wee!
But we sing in a minor key
To remember that we suffered!

Cheered by the prospect, Abq Jew DVRed the entire episode. Which he hasn't had the time to watch yet. But here is the video of Remember That We Suffered.

A little too flip and flippant? Here is a video from Human: The Movie that will snap us all back to reality.


HUMAN is a collection of stories and images of our world, offering an immersion to the core of what it means to be human. Through these stories full of love and happiness, as well as hatred and violence, HUMAN brings us face to face with the Other, making us reflect on our lives.

From stories of everyday experiences to accounts of the most unbelievable lives, these poignant encounters share a rare sincerity and underline who we are – our darker side, but also what is most noble in us, and what is universal.

Our Earth is shown at its most sublime through never-before-seen aerial images accompanied by soaring music, resulting in an ode to the beauty of the world, providing a moment to draw breath and for introspection.

And about this video clip (and the power of chocolate!) -


Born in 1933, Francine Christophe was deported with her mother at the Bergen-Belsen concentration camp in 1944. Released the following year, she continues to share her experience and memories, particularly with the younger generations.

So let's switch to the Real Housewives of ISIS. Once again, The New York Times (!) tipped Abq Jew off.


The comedy sketch opens with a hijab-wearing British woman named Afsana fretting over how to impress the Islamic State militants who recruited her. “It’s only three days to the beheading, and I’ve got no idea what I’m going to wear!” she laments.

Another woman models her new suicide vest for her fellow jihadist wives. “What do you think?” she asks. “Ahmed surprised me with it yesterday.”

And then there is this video of Israeli Folk Dancing - A Celebration of Traditions, put out by the Israel Ministry of Foreign Affairs.


There's no special message here, except 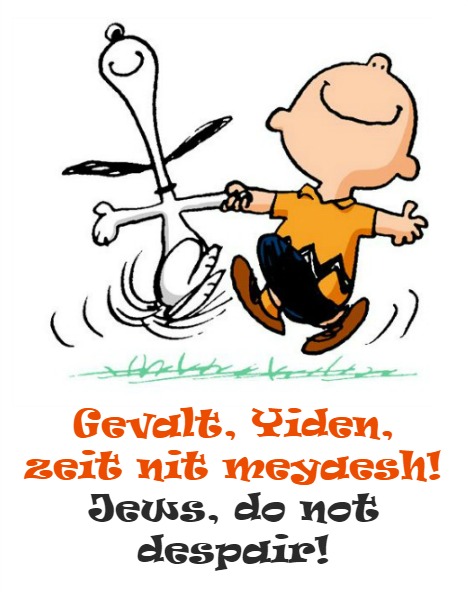