If You Knew My Story: It is Abq Jew's solemn responsibility to you, his loyal readers, to announce that Bright Star, the award-winning and Tony-nominated musical, will give its final performance on Sunday June 26.


Bright Star is a musical written and composed by Steve Martin and Edie Brickell. It is set in the Blue Ridge Mountains of North Carolina in 1945-46 with flashbacks to 1923.

The musical is inspired by their Grammy-winning collaboration on the 2013 bluegrass album Love Has Come for You. 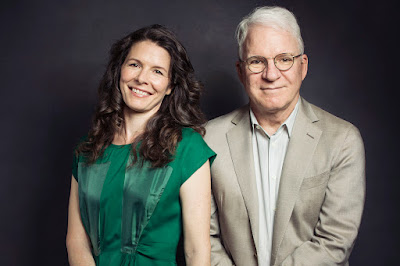 How could this happen? Abq Jew hears you ask. These are two very talented people, who assembled a very talented team, worked hard, paid their dues ... and yet ... ?

Abq Jew, who just received the Cast Album for Father's Day, is devastated. Steve and Edie - no, not that Steve (Sidney Leibowitz) and lehavdil Eydie (Edith Gormezano)  - must feel even worse. After all, they had skin in the game.

Fortunately (arguably), Michael Paulson of The New York Times has answered the question of Why - in his article Anatomy of a Broadway Flop: What Sank These 4 Shows?

Mr Paulson tells us (as if we don't already know):


Broadway is a brutal business, in which real success is enjoyed by a handful of shows, while a vast majority crash and burn.

And this season was especially tough, because one show, “Hamilton,” gobbled up much of the attention, enthusiasm and awards that motivate potential ticket buyers.

Here is what Mr Paulson wrote about Bright Star's failure - after running 30 previews, then 109 performances after opening March 24 at the Cort Theater.


Although some were charmed, few were wowed, making it hard to build word of mouth. As an original musical, not adapted from a film or novel, and with a complex plot, it was hard to explain to ticket buyers.

Some found the show’s denouement laughably predictable. The musical was nostalgic; it was often described as quiet, or small, which has worked for some recent musicals (“Once,” “Fun Home”), though not this year.

As “Bright Star” struggled at the box office, Mr. Martin and Ms. Brickell, among others, lent the production more money to keep it running, and on about a dozen occasions Mr. Martin joined the band onstage for an instrumental entr’acte, but it was not enough to save the show.

The musical's finest hour may have been at the recent Tony Awards. Nominated for 5 awards - including Best Musical - the show walked away with ... none. Maybe they just picked the wrong year. Whaddya think, Lin-Manuel?

Here is their final curtain call. Rest in Peace. May Bright Star's memory be for a blessing.