Trotsky and Frida and Diego

A Jewish Story: Who knew that Leon Trotsky and Friday Kahlo and Diego Rivera all had Jewish backstories? Abq Jew didn't. But he is now proud to announce that


The Harlen Group, in association with Camino Real Productions, presents the world premiere of Trotsky & Frida by Leonard Koel.

It will open on Sunday, October 25 – the 98th anniversary of the start of the October Russian Revolution – and have a special, limited production at the N4th Theater .... 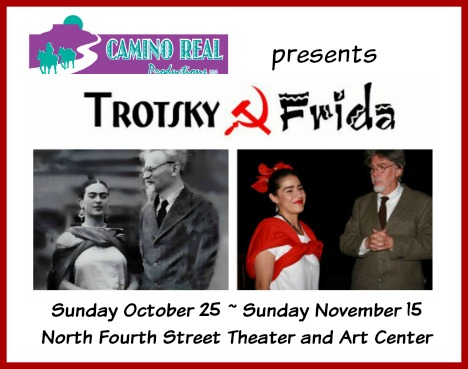 The show's press release tells us the history -


When Lenin died in 1924, Joseph Stalin’s most dangerous rival was Leon Trotsky, the brilliant Marxist theorist who had led the Bolshevik army to victory and allowed Vladimir Lenin to take power.

After Stalin had Trotsky expelled from the Communist Party, he and his wife Natalya Sedova were forced to leave the Soviet Union and seek refuge in various European countries.

In 1937 they were given asylum in Mexico, with the help of famed artists Diego Rivera and Frida Kahlo, and moved into Frida’s house La Casa Azul.

While the lascivious result may have been predictable given Frida and Diego's well-documented sexual adventures, it is the unexpected effect of the affair on the lives of all four that makes the story compelling.


Nonagenerian Albuquerque playwright Leonard Koel's historical drama blends known facts from the torrid, yet brief affair with his fictionalized account of the pillow talk between these legendary figures from the worlds of art and politics.

Director Harry Zimmerman has assembled an outstanding cast and crew that rank as some of the best among their peers in Albuquerque. 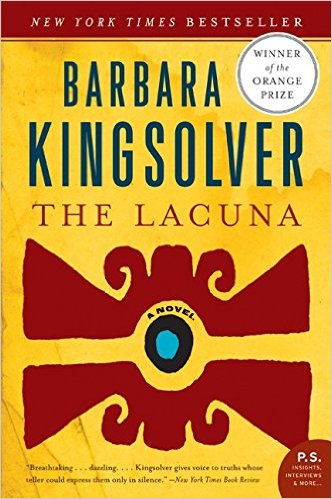 Now, Abq Jew did know some of this - because not too long ago he had the pleasure of reading Barbara Kingsolver's novel The Lacuna. Ms Kingsolver's website tells us


In her most accomplished novel, Barbara Kingsolver takes us on an epic journey from the Mexico City of artists Diego Rivera and Frida Kahlo to the America of Pearl Harbor, FDR, and J. Edgar Hoover. The Lacuna is a poignant story of a man pulled between two nations as they invent their modern identities.

Born in the United States, reared in a series of provisional households in Mexico—from a coastal island jungle to 1930s Mexico City—Harrison Shepherd finds precarious shelter but no sense of home on his thrilling odyssey.

Life is whatever he learns from housekeepers who put him to work in the kitchen, errands he runs in the streets, and one fateful day, by mixing plaster for famed Mexican muralist Diego Rivera. He discovers a passion for Aztec history and meets the exotic, imperious artist Frida Kahlo, who will become his lifelong friend.

When he goes to work for Lev Trotsky, an exiled political leader fighting for his life, Shepherd inadvertently casts his lot with art and revolution, newspaper headlines and howling gossip, and a risk of terrible violence.

Barbara Kingsolver's book was "breathtaking" and "dazzling" - and Abq Jew is pretty sure Leonard Koel play will be, too.


The imagined story of the very real love affair
between two larger-than-life figures.

And how about those Jewish backstories?

About Leon Trotsky, Wikipedia tells us

He was the fifth child of eight of well-to-do farmers, David Leontyevich Bronshtein (1847–1922) and his wife Anna Bronshtein (1850–1910). The family was of Jewish origin but reportedly not religious. The language spoken at home was a mixture of Russian and Ukrainian (known as Surzhyk).

When Trotsky was nine, his father sent him to Odessa to be educated.

About Frida Kahlo, Wikipedia tells us


Frida Kahlo was born on July 6, 1907, in her parents' house known as La Casa Azul (The Blue House), in Coyoacán. At the time, Coyoacán was a small town on the outskirts of Mexico City.

Wilhelm Kahlo traveled to Mexico in 1891, at the age of nineteen, and upon his arrival, changed his German forename, Wilhelm, to its Spanish equivalent, Guillermo.

And about Diego Rivera, Wikipedia tells us

Rivera was born in Guanajuato, Mexico, to a well-to-do family, the son of María del Pilar Barrientos and Diego Rivera Acosta. Diego had a twin brother named Carlos, who died two years after they were born. Rivera was said to have Converso ancestry (having ancestors who were forced to convert from Judaism to Catholicism). Speaking about himself, Rivera wrote in 1935:

"My Jewishness is the dominant element in my life."

The story (or stories) of Trotsky and Frida and Diego did not end in a happy way - certainly not as shown in this video.


In fact, Wikipedia tells us


On 20 August 1940, in his study Trotsky was attacked by Ramón Mercader who used a mountaineers' ice-axe as a weapon.

The blow to his head was bungled and failed to kill Trotsky instantly, as Mercader had intended. Witnesses stated that Trotsky spat on Mercader and began struggling fiercely with him.

Hearing the commotion, Trotsky's bodyguards burst into the room and nearly killed Mercader, but Trotsky stopped them, laboriously stating that the assassin should be made to answer questions.

Trotsky was taken to a hospital, operated on, and survived for more than a day, dying at the age of 60 on 21 August 1940 as a result of loss of blood and shock. Mercader later testified at his trial:

I laid my raincoat on the table in such a way as to be able to remove the ice axe which was in the pocket. I decided not to miss the wonderful opportunity that presented itself.

The moment Trotsky began reading the article, he gave me my chance; I took out the ice axe from the raincoat, gripped it in my hand and, with my eyes closed, dealt him a terrible blow on the head.

According to James P. Cannon, the secretary of the Socialist Workers Party (USA), Trotsky's last words were

"I will not survive this attack. Stalin has finally accomplished the task he attempted unsuccessfully before."

Some opine that Frida, a Stalinist, had something to do with the killing (which Stalin ordered). Emmy Lou Packard, former head of San Francisco Art Commission and Rivera student, knew Frida and Diego (she told me Frida had invited Trotsky to dinner, but he refrained...staying home and dying....

There is also another New Mexico Connection.

According to Bruce Held in "A Spy's Guide to SF and Alb", part of the planning for the Trotsky assassination occurred in Santa Fe at a Drug store on the Plaza that is now Hagen Daz.