Does This Mean Moshiach Isn't Coming?  This all goes back to an old and famous joke, which some of you may remember: 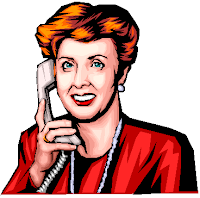 Rivkah sprang to answer the telephone.  "Darling, How are you? This is Mommy.""Oh Mommy," Rivkah said crying, "I'm having a bad day. The baby won't eat and the washing machine won't work. I've sprained my ankle and I'm hobbling around. On top of all this, the house is a mess and I'm supposed to have the Minkys and the Rokens for dinner tonight. I haven't even had a chance to go shopping."The voice on the other end said in sympathy, "Darling, let Mommy handle it. Sit down, relax and close your eyes. I'll be over in half an hour. I'll do your shopping, tidy up the house and cook your dinner. I'll feed the baby and I'll call an engineer I know who'll fix your washing machine. Now stop crying. I'll even call your husband David at the office and tell him he should come home to help out for once.""David?" said Rivkah. "Who's David?""Why, David 's your husband....Is this 555-3749?""No, this is 555-3747."

"Oh, I'm sorry. I guess I dialed the wrong number."There was a short pause, then Rivkah said, "Does this mean you're not coming over?"

[Former] Representative Anthony Weiner (D, NY) has been the ... butt of many jokes lately. But ... until Abq Jew saw this Aish video by Rabbi Yaacov Salomon, Why Weiner Should Resign, he didn't realize that the Messiah's arrival was imminent.

By now, Rep Weiner may have already resigned (NBC and The New York Times say he will, and who is Abq Jew to argue?).  Does this mean Moshiach isn't coming - at least, not right now?

And speaking of shandas, Rex Weiner (as far as Abq Jew knows, no relation to the Rep) of The Jewish Daily Forward recently published an article, California’s Fiscal Crisis Affects Jews in Jail, about the kosher food crisis within the Golden State's overcrowded and underfunded prison system.

Abq Jew is a citizen of the world.  He's been around the block a few times.  And yet - he doesn't understand why there should be demand for kosher food in prison, any more than he understands why there are Braille instructions on drive-thru ATMs.

Yes, Abq Jew knows - it's complicated. Jews who observe Jewish ritual have been convicted of money laundering, sex abuse, and worse.  But surely, there must be some relationship - even of it's not absolutely 1-to-1 - between Jewish ritual observance and Jewish ethical standards.

Maybe.  Maybe not.  And Abq Jew promises not to call you ... surely.