Shalom, Shalom:  This week Congregation Albert says Shalom, Shalom to Rabbi Howard Kosovske and to Rabbi Harry Rosenfeld, as the former departs the Land of Enchantment and the latter arrives therein. 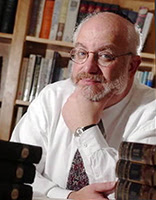 Rabbi Rosenfeld comes to Congregation Albert from Temple Beth Zion in Buffalo, New York, one of the oldest and largest Reform congregations in the country.  As Senior Rabbi since 2000, Rabbi Rosenfeld took an active role in helping to grow the Western New York Jewish Community. He chaired the Clergy Division of the Buffalo United Jewish Community Fund Drive for several years, and served on the board of the National Federation for Just Communities, receiving their Interfaith Award for his work in the community.

Rabbi Rosenfeld served as Rabbi of Congregation Beth Shalom (the Frozen Chosen - really! - click the link!) in Anchorage, Alaska, from 1984 through 2000. Rabbi Rosenfeld was honored by the Alaska State Legislature for his community work against racism, and for his 16 years of service to the people of Alaska.

Rabbi Rosenfeld holds a Bachelor's in Psychology from John Carroll University; and a Master's in Hebrew Letters, and Rabbinic Ordination, from Hebrew Union College in Cincinnati, Ohio.

Rabbi Kosovske leaves Congregation Albert, where he served as Interim Rabbi, and returns - at least, for the time being - to Peabody, Massachusetts, whence (no, not the redundant from whence) he retired in 2008.

Abq Jew is sure that Congregation Albert found Rabbi Kosovske very engaging, intelligent, interesting, active, and humorous - as did Abq Jew. With 40+ years of rabbinic experience - holding pulpits, teaching, and lecturing  - it is clear to Abq Jew that Rabbi Kosovske is a people's rabbi who does not know what the word retirement means.

Hi, My name is becka benard, i live in germany with my father, mother and litle angel sister. i am working in a Interim Management Provider company. well everyday i came across hundreads of websites and i like your website because it seem to be different, that's why i'm giving some of my time to posting a comment here.
Have a nice day..
Stay Blessed!