How Many Bagels Does It Take? 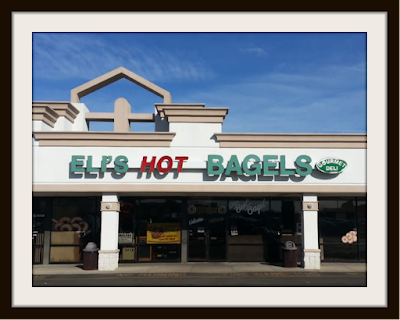 Abq Jew fully recognizes that you, his loyal readers, may never have heard of Eli's Hot Bagels. Or even of Aberdeen, New Jersey. And that thus, you may not appreciate the enormity of this event.
Well, Aberdeen was for 18 years (1982-2000) the hometown of Mr & Mrs Abq Jew, their kids, and their cats. Yes, their cats. All of us there depended on Eli's. Some weeks, we almost lived there.
Anyway - in 1977 (you may recall), Aberdeen Township split off from Matawan Borough to become its own, identifiable place. 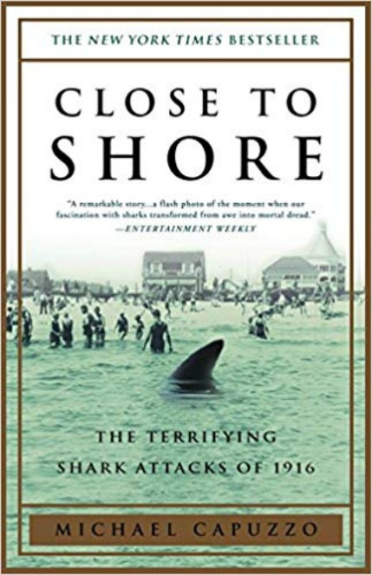 Now Matawan Borough Abq Jew is sure you've heard of, since that's where the shark attacked in July 1916. Swam right up Matawan Creek, it did. Attacked and killed 11-year-old Lester Stilwell and 24-year-old Watson Stanley Fisher. Also attacked 14-year-old Joseph Dunn, who survived.
But Abq Jew digresses. Eli's Facebook page provides a history of the shop:

Eli's Hot Bagels has been serving the Aberdeen, Matawan and surrounding areas since 1974. We were voted as the Best Bagel Store In Monmouth Country for 3 consecutive years by the Asbury Park Press.
Eli's Hot Bagels first opened its doors in 1974. Eli, and his brother Sam opened a small store, which quickly grew in size and reputation. In 2008, Eli's Hot Bagels was purchased by the Glasser and Schwartz families with the hopes of rebuilding this local landmark back to what it used to be!

And Patch.com provides a fuller description of this community catastrophe:

Beloved Aberdeen Bagel Shop Permanently Closes
Until it closed this past weekend, Eli's Hot Bagels had been in business since 1974, when it was opened by two brothers.

ABERDEEN, NJ — Eli's Hot Bagels, a beloved Aberdeen bagel store that had been in business for decades, has permanently closed its doors.
The bagel shop announced the closure Sunday on Facebook, however Aberdeen locals have been speculating for days that it is closed, ever since seeing the dark and shuttered storefront off Rt. 34.
"Hi All, Eli's Hot Bagels in Aberdeen is permanently closed," wrote the business on Facebook. "As with all small businesses during the pandemic it has been a struggle. Unfortunately our landlord hasn't made it any easier. We wish all of our loyal customers the best and thank you all for your continued support."
Eli's Hot Bagels had continuously been in business since 1974, when it was opened by two brothers, Sam and Eli. It was voted the "Best Bagel Store In Monmouth Country" for three consecutive years by the Asbury Park Press.

In 2008, the business came under new ownership.
Much has changed in that Aberdeen shopping complex: The Bow Tie Cinemas that used to be located right next door to Eli's Bagels is now a brewery. 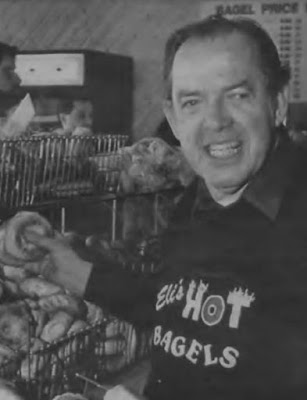 You can read more about Eli Provdo (that's his mostly unknown family name - Abq Jew never knew it!) in the [PDF version of the] January 17, 1990 edition of the Bayshore Independent (see cover and page 30).
As it turns out - there are no coincidences, are there? - Julia Rothman and Shaina Feinberg just published an illustrated article in The New York Times that asks, and attempts to answer, the question
How Many Bagels Does It Take
to Keep a Place in Business?
. 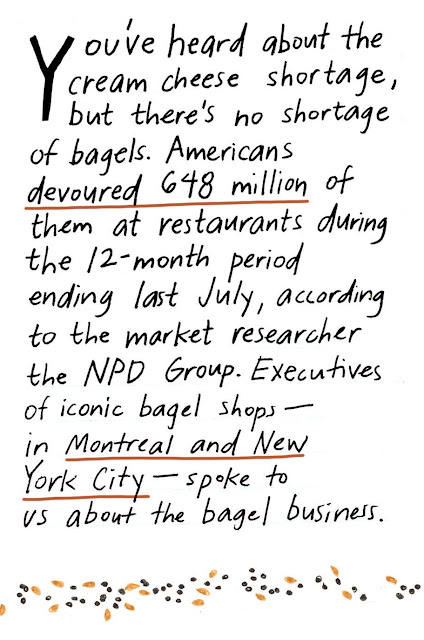 Here is one answer, from Joe Morena, owner of St Viateur Bagel in Montreal: 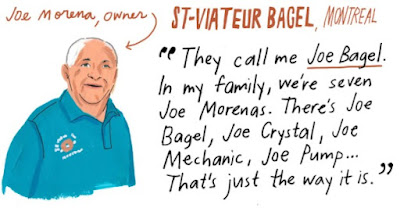 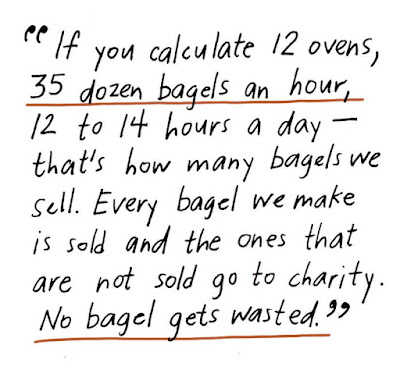 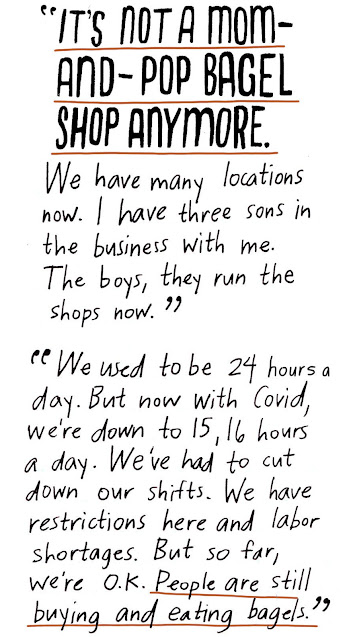 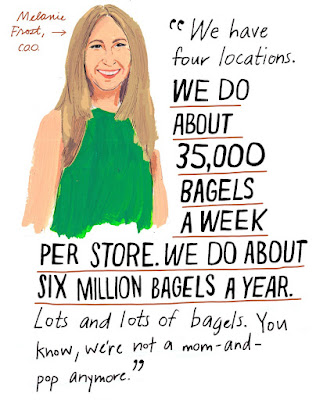 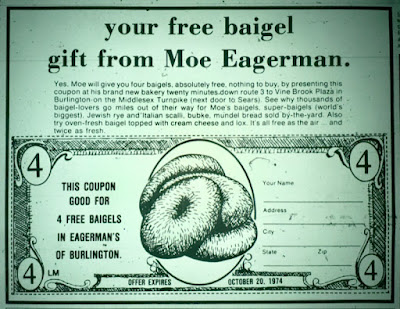 To Morris "Moe" Eagerman
Abq Jew cannot think about - and certainly not blog about - bagels without mentioning the wonderful Eagerman family. Bagel business royalty - in Boston, Natick, Chicago, and Miami Beach.
Moe was, Abq Jew believes, the last of the Eagerman bagel-makers. His 2004 obituary tells us that Moe was:

Cherished uncle of many nieces, nephews, grand nieces and grand nephews. Devoted friend of the Gadman, Jacobs and Buckley families.

Beyond that - Moe claimed that it was his “Original King Bagel” Eagerman's in Natick where he originated the cinnamon raisin bagel, and where he invented much of the modern manufacturing equipment for bagel-making.
Why does Abq Jew care about this? Because, in Spring 1974, when Abq Jew journeyed from California to New York, he went via Miami Beach (of course).
Where he met Julius and Ruth Eagerman and their son Brad, who were very good friends of his Great Aunt Lil and Great Uncle Ben, whom he was visiting.
Where the beloved Eagerman family was, to put it mildly, in the bagel business. And where Ruth Eagerman was known to one and all as 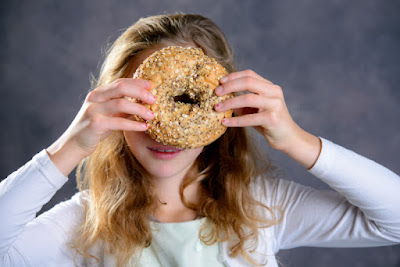 "Bagel Ruthie"
They're all gone now - Julius in 2004; Ruth in 2014. Their son (and only child) Brad -  with whom Abq Jew schlepped around Miami Beach one glorious June day - died in 1994. From Brad's obituary in the Chicago Tribune:

Bagels have been in the blood of the Eagerman family since the end of World War I, when a Polish baker's apprentice arrived in Boston with his boss' daughter in tow and a recipe in hand.
Samuel Eagerman and his wife raised eight children and founded a bagel-making business that in following generations would spread to Florida and Illinois.

That heritage proved a source of strength and grief last week for Julius Eagerman, 72, as he began packing up what remains of Eagerman Bagels & More, which his only child opened in DuPage County 13 years ago.
"This is eating my heart out," he said, standing next to refrigerated cases once loaded with chopped liver and cream cheese. "This is his baby. It was my baby too."

Brad Eagerman died July 8 at the age of 46, three weeks after a predawn gas explosion at his Lombard deli left him burned and comatose.

Eagerman was lighting the oven pilot light when the gas ignited. He placed the emergency call himself, police records show. Few traces of the small explosion remain.

Julius Eagerman, who ran bakeries in Boston and North Miami Beach for nearly 30 years, is stumped.

"Those ovens are built to last 100 years," he said, flicking a switch that sent the rack rotating to show that the electricity flow was intact.

Julius Eagerman said he never thought his son would continue the tradition begun in Ruvno, Poland, by his great-grandfather.

Though he helped out as a teen, Brad Eagerman at first opted for a corporate job in the food industry. But in 1981, he chucked the suit and tie for an apron and opened up shop in DuPage.

"He really was a believer in bagel," his father said.

Then Julius Eagerman returned to the shuttered storefront to sort through his son's paperwork and clean out the shelves. 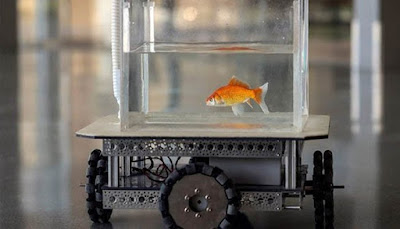 Not all stories end happily. But almost all of Abq Jew's blog posts do. So - here's a story from The Washington Post's Rachel Pannett:

Fish in the driver’s seat:
Israeli scientists teach goldfish to operate vehicle
Israeli researchers have taught goldfish to drive, according to a study that offers new insights into animals’ ability to navigate — even when they’re literally fish out of water.
For the study, published in the peer-reviewed journal Behavioural Brain Research, the goldfish were trained to use a wheeled platform, dubbed a Fish Operated Vehicle. The FOV could be driven and have its course changed in reaction to the fish’s movements inside a water tank mounted on the platform.
Their task was to “drive” the robotic vehicle toward a target that could be observed through the walls of the fish tank. The vehicle was fitted with lidar, short for light detection and ranging, a remote sensing technology that uses lasers to collect data on its ground location and the fish’s location within the tank.

The researchers, from Ben-Gurion University, found the fish were able to move the FOV around unfamiliar environments while reaching the target “regardless of their starting point, all while avoiding dead-ends and correcting location inaccuracies.”

The goldfish in the tank were placed in a test arena and tasked with driving toward a target. Upon successfully hitting the target, they received a food pellet reward. The scientists said that after a few days of training, the fish were able to navigate past obstacles such as walls, while eluding efforts to trick them with false targets.

“The study hints that navigational ability is universal rather than specific to the environment,” said Shachar Givon, one of the study’s authors, in a statement. “It shows that goldfish have the cognitive ability to learn a complex task in an environment completely unlike the one they evolved in.” 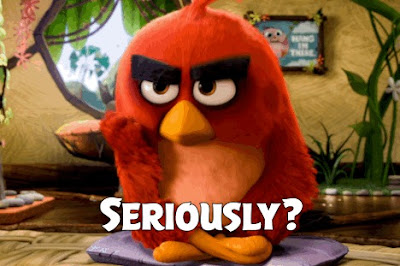 But - can they remember where they parked?