It's Time for Shavuot! Lately, Abq Jew has been thinking a lot about windmills. Why? Because windmills are - like a circle in a spiral, like a wheel within a wheel. Never ending or beginning on an ever-spinning reel. 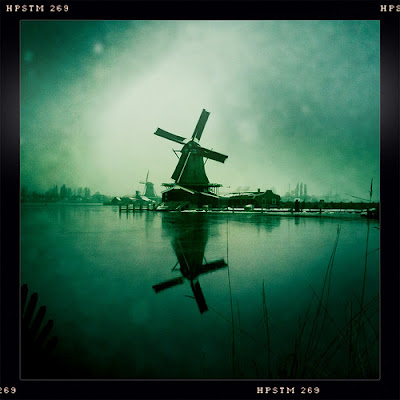 And also because the Holiday of Shavuot (the Festival of Weeks) fast approaches, getting closer by the ... day. Which brings with it Abq Jew's favorite haftarah reading - Chapter 1 of the Book of Ezekiel (with one verse from Chapter 3 as a chaser). My Jewish Learning tells us:

The haftarah for the first day of Shavuot is Ezekiel 1:1-28, 3:12, which contains the prophet’s most astounding vision of God. Ezekiel describes a remarkable vision of God.

He sees a Divine Throne-Chariot, whose main feature is a group of four-faced living creatures. His appearance of a manifestation of God connects the haftarah to the Torah reading, where God reveals His will at Mount Sinai. 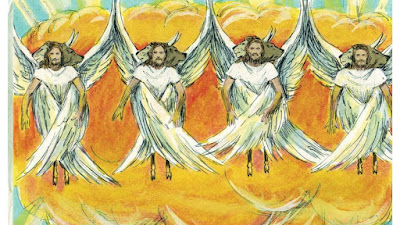 The JC tells us:

Complementing the awesome revelation of the Ten Commandments on Mount Sinai, which is read from the Torah, is Ezekiel’s vision of the chariot of angels.

The prophet beholds a quartet of celestial beings, each with four faces, four wings and glittering hooves hovering above a wheel; together they form a chariot that bears aloft the Divine Presence.

The flashing fire that forms the backdrop to this extraordinary spectacle mirrors the pyrotechnics of Sinai. It is the most enigmatic haftarah of the year and trying to fit the details together is like doing a surreal jigsaw puzzle.

When Moses encounters the glory of God in the cleft in the rock, the Torah provides no description other than record it happened as if it could not be put into words.

Ezekiel treats us to a literary son et lumière.

His vision became the focus of an early branch of mysticism named after it, Merkavah, the Chariot, whose followers sought to ascend through the heavens to witness the glory of God.

So, maybe that (see 4 Guys Above) is what Ezekiel saw.

Or maybe it was more like the above image: an illustration on the cover of Josef F Blumrich's 1974 book The Spaceships of Ezekiel.

In which the then chief of NASA's systems layout branch of the program development office at the Marshall Space Flight Center posits that Ezekiel was not describing a meeting with God in a prophetic vision - but one of several encounters with ancient astronauts in a shuttlecraft from another planet. 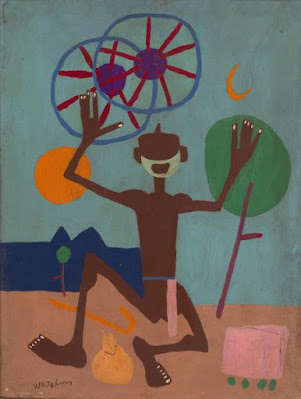 And then there's Ezekiel's Wheel: a wheel within a wheel, capable of rotating not only in the forward-backward direction, but also sideways. Did it look like the image above, from the Smithsonian American Art Museum? 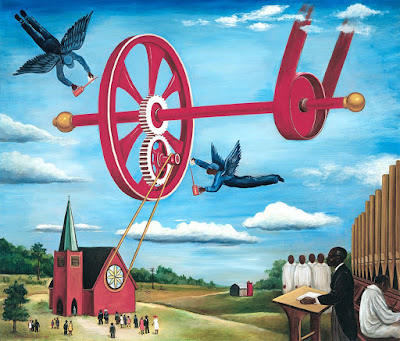 Or perhaps like the image above, from the Columbus (GA) Museum? 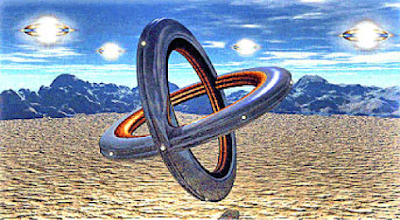 Or perhaps something even simpler in design, as shown in the illustration above? 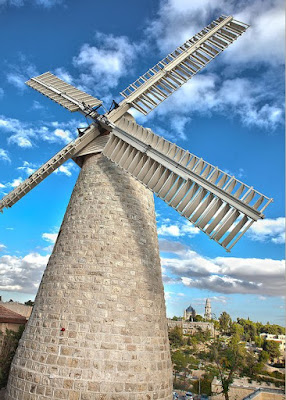 Windmills also go around circles.
You know - sort of like genealogy research.

Abq Jew's beloved daughter-in-law and her mother (Abq Jew's mechuteneste) and all her mother's family have - for as long as Abq Jew has been part of their family - believed that they are related to businesswoman, art collector, and philanthropist Helena Rubinstein. 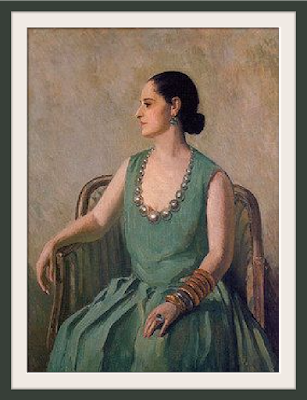 There is no reason to doubt them,
and every reason to believe them. 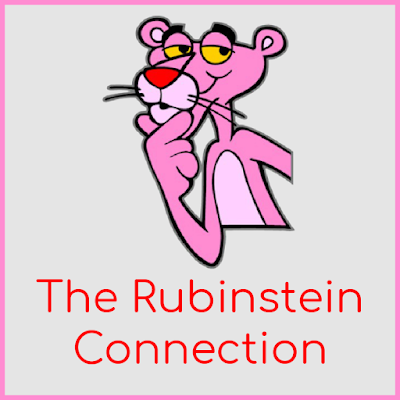 And yet the exact identity of The Rubinstein Connection remains - after many years - elusive. A riddle wrapped in a mystery inside an enigma, as Winston Churchill once said of Russia (still true). To Abq Jew, at any rate. Who nightly loses sleep over it, but dreams of windmills.

And who just can't seem to get the song The Windmills of Your Mind out of his. Thus Wikipedia tells us:

"The Windmills of Your Mind" is a song with music by French composer Michel Legrand and English lyrics written by Americans Alan and Marilyn Bergman.

Now, you can search YouTube (and the rest of the Internet), and you'll find a zillion "covers" of the song by a zillion different artists. But Abq Jew is going to stick with Barbra Streisand's version, because of Babs' crystal clear enunciation of the song's opening word and her glorious articulation of the lyrics that follow.

Round
Like a circle in a spiral, like a wheel within a wheel
Never ending or beginning on an ever spinning reel
Like a snowball down a mountain, or a carnival balloon
Like a carousel that's turning running rings around the moon
Like a clock whose hands are sweeping past the minutes of its face
And the world is like an apple whirling silently in space
Like the circles that you find
In the windmills of your mind!

Like a tunnel that you follow to a tunnel of its own
Down a hollow to a cavern where the sun has never shone
Like a door that keeps revolving in a half forgotten dream
Or the ripples from a pebble someone tosses in a stream
Like a clock whose hands are sweeping past the minutes of its face
And the world is like an apple whirling silently in space
Like the circles that you find
In the windmills of your mind!

Keys that jingle in your pocket, words that jangle in your head
Why did summer go so quickly, was it something that you said?
Lovers walking along a shore and leave their footprints in the sand
Is the sound of distant drumming just the fingers of your hand?
Pictures hanging in a hallway and the fragment of a song
Half remembered names and faces, but to whom do they belong?
When you knew that it was over you were suddenly aware
That the autumn leaves were turning to the color of her hair!

Like a circle in a spiral, like a wheel within a wheel
Never ending or beginning on an ever spinning reel
As the images unwind,
like the circles that you find
In the windmills of your mind! 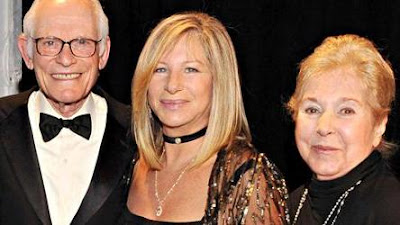 The lyrical and surreal stream of consciousness was written by the team (in every respect of the word) of Alan and Marilyn Bergman. About whom Wikipedia tells us:

The pair have been married since 1958 and have written the music and lyrics for numerous celebrated television shows, films, and stage musicals. The Bergmans have won two Academy Awards for Best Original Song and have been inducted into the Songwriters Hall of Fame.

Alan Bergman was born in Brooklyn, New York, in 1925, the son of Ruth (Margulies), a homemaker and community volunteer, and Samuel Bergman, who worked in children's clothing sales. He studied at University of North Carolina at Chapel Hill and earned his master's degree in music at UCLA.

Marilyn Bergman was born in 1929, coincidentally at the same Brooklyn hospital where Alan had been born four years earlier, and is the daughter of Edith (Arkin) and Albert A. Katz. Both Alan and Marilyn are from Jewish families.

And of the Bergmans' relationship with Barbra Streisand, The JC tells us:

"This is not just long professional relationship," says Marilyn, speaking on the phone from their home in Beverly Hills, "but a deep and lasting personal one." 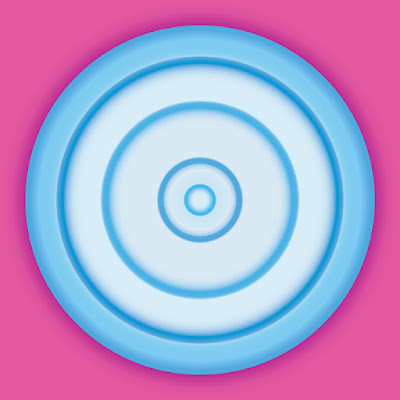 Too many circles? Too many windmills?
Here's one special version by The Muppets!

Abq Jew wishes everyone - except for those firing
rockets toward Ashkelon, his old home town, or toward
any place in the Land of Israel - a Happy Shavuot.
And, please God, a safe one.