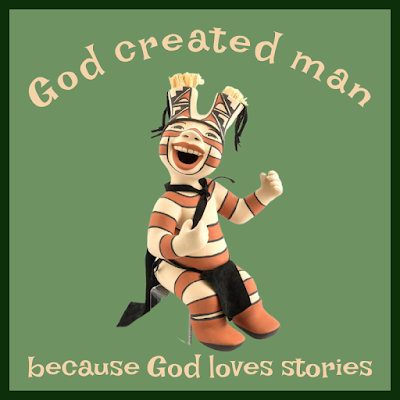 Abq Jew is honored and thrilled for you, his loyal readers, to meet Amy Bess Cohen, his ... well, for now, let's just say cousin. Amy is a mere 14 steps away on Abq Jew's Family Tree. And ...

Now, Abq Jew knew about his family connection to Amy Bess Cohen for - well, only a couple of years. And he knew she was a writer (and a very good one), having read her first novel, Pacific Street.

But Abq Jew didn't find out about Amy's Santa Fe connection until she posted this on her Facebook page.

I am excited to announce the publication of my second family history novel, Santa Fe Love Song. Like my first book Pacific Street, Santa Fe Love Song is a fictionalized account of the lives of my family members, this time my great-great-grandparents Bernard Seligman and Frances Nusbaum.

Bernard was a young German immigrant who became a pioneer on the Santa Fe Trail. He fell in love with the American West and with a woman back east. How he reconciles those two loves is part of the story told in my new book.

Let's start with Arthur Seligman, the man in this photograph.

Arthur Seligman (June 14, 1871 – September 25, 1933) was an American businessman and politician. He served in several offices in New Mexico, including mayor of Santa Fe and governor.

Seligman was born in Santa Fe, New Mexico Territory, the son of Bernard and Frances Seligman.

Abq Jew was also excited by the announcement of Amy's new book. Why? Because -

Since Abq Jew's cousin Amy is related (very directly) to our beautiful state's first Jewish governor, so is Abq Jew!

This not to belittle Abq Jew's relationship to Bernard and Frances, who are famous in their own right. Yes, our relationship is rather distant, and involves more luck and good timing (which is to say, marriage) than blood.

After more than 10 years living on the West Bank of the Rio Grande, Abq Jew has achieved a goal that he had only dreamed about. For, to use a term that the New Mexico Jewish Historical Society will surely understand, Abq Jew now has yichus!

Bernard is torn between two loves---his new home in Santa Fe and a woman who lives in Philadelphia. How will he resolve the conflict? As a young Jewish immigrant new to America in the 1850s, he finally felt at home after traveling the Santa Fe Trail and settling in Santa Fe with his older brother. His travels across America introduced him to his new nation and challenged his sense of himself and what it meant to be a man.

But then he met Frances while traveling back east. Could he convince her to leave the comforts of a big city, a large Jewish community, and her family?

And if he did, would she be happy? Bernard and Frances are characters inspired by real people, the author's great-great-grandparents. and their story is based on her research of their times and their lives.

Wow. What a story. Torn between the Land of Enchantment and the mishpocha back east? Abq Jew suspects - no, Abq Jew knows - we've all been there.

Want to know the facts about European Jews coming to New Mexico? You can start with Henry Tobias's A History of the Jews in New Mexico - as Amy did - and move on from there.

Want to know what it felt like? What Amazon said about Amy's first novel is even truer here:

In this novel, the author takes you into their world and their minds so that we can all experience what their lives must have been like. 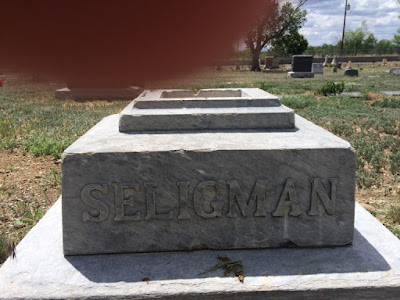 Here is what Amy's novel idea means to the rest of us. You know - in practical terms.

Although Amy does provide an epilogue, a postscript, acknowledgements, and a dedication. However -

If you want to know everything Amy Bess Cohen knows
about her family, you have to read her blog.

Amy's Brotmanblog (yes, Amy is also a Brotman) is packed with records, documents, photographs, interviews, and personal recollections from her years (yes, years) of genealogical research.

That's where the footnotes are.
That's where Amy's Genealogy Methodology resides.
And that's where Abq Jew found most of the photos in this blog post.

Genealogy is not just about obtaining names, dates, and documents; it’s about finding meaning in the past and learning from the lives our ancestors lived. - Amy Bess Cohen 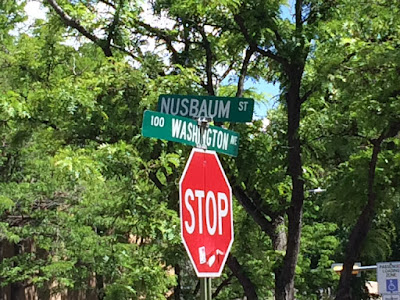 Amy visited New Mexico a few years ago, and wrote:

Our days in Santa Fe were a wonderful blend of history, art, architecture, and family history.

They call New Mexico the Land of Enchantment, and Santa Fe is an enchanting place even if you have no family ties to the place.

But for me, it was more than that.

Although at times it was hard to imagine what is now very much a tourist-filled place as the old settlement of native Americans, Spanish and Mexican settlers, and then later Anglo settlers like my ancestor, when I could time-travel in my mind to the years when my great-great-grandparents and their children roamed those same streets around the plaza, it was quite magical, and yes, enchanting.

Thanks to you and Amy. I too have read and enjoyed Amy's fiction based on her genealogy and imagination. I am in the process of doing something similar with my immigrant ancestors.