Antisemitism Here and Now: Got hate? Got intolerance? Although we Jews in New Mexico have been spared the worst (see Hate in NM: March 2019), we are by no means immune. And we see very clearly what is going on - all around us. 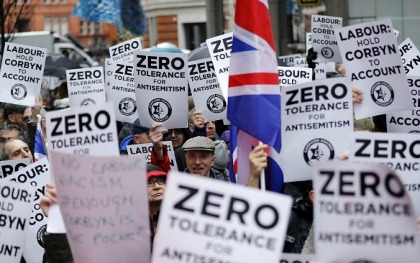 To help us better understand antisemitism - and why this term should neither be hyphenated nor capitalized - Professor Deborah Lipstadt, author and fighter against Holocaust denial, will speak with us in Santa Fe on Sunday, August 4.

Dr Ron Duncan Hart, President of the Jewish Federation of New Mexico, first told us about Professor Lipstadt's speech in this summer's issue of The New Mexico Jewish Link. It is reprinted here with his permission. 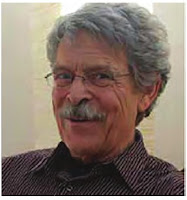 On August 4, 1944, Anne Frank and her family were arrested by the Gestapo in Amsterdam. They were shipped to Auschwitz.

On this 75th  anniversary of that date, we will be commemorating her and her courage, along with that of her mother and sister who all died in the camps.
As we see this new wave of anti-Semitism in our country, we confront it as intolerance that undermines the fabric of our society. 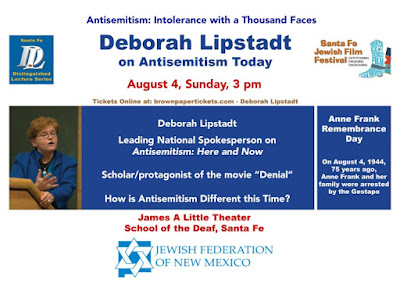 In a special event for New Mexico,
Deborah Lipstadt will speak on
Antisemitism: Here and Now
at 3:00 pm on August 4 at the James A Little Theater, Santa Fe

Dr. Lipstadt is a leading spokesperson in the United States and internationally on the rising antisemitism in Europe and the U.S. She is being invited by the Santa Fe Distinguished Lecture Series and the Santa Fe Jewish Film Festival, with support from the Jewish Federation of New Mexico. 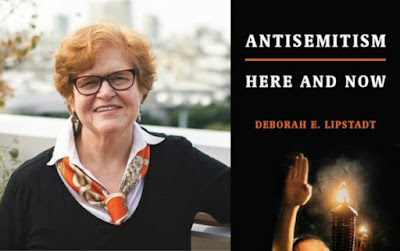 Her new book on anti-Semitism, published earlier this year, sold out immediately and went into a second printing on the second week after its release. In addition to the American edition, it is now being published in England, Germany, the Czech Republic, and Israel.

Lipstadt came to national attention in 2016 with the movie Denial, in which she was played by Rachel Weisz, which chronicles her international court case with David Irving, a Holocaust denier in England.

Lipstadt had long fought Holocaust deniers, and in this court case she was able to prove the falsehoods of those who denied it happened. After a successful run in theaters, Denial can now be seen on Amazon Prime Video, YouTube, and other streaming services.


Her TED talk about the trial has received 1.3 million views.


Lipstadt is an award-winning author. In her most recent book, she gives us a penetrating and provocative analysis of the hate that will not die, focusing on its current, virulent incarnations on both the political right and left: from white supremacist demonstrators in Charlottesville, Virginia, to mainstream enablers of anti-Semitism such as Donald Trump and Jeremy Corbyn, to a gay pride march in Chicago that expelled a group of women for carrying a Star of David banner.

When newsreels depicting the depredations of the Holocaust were shown in movie theaters to a horrified American public immediately after World War II, it was believed that the anti-Semitism that was part of the fabric of American culture in the 1920s and 1930s was finally going to be laid to rest.

In the ensuing decades, Gregory Peck received an Academy Award for playing a journalist who passed as a Jew to blow the lid off genteel Jew hatred, clauses restricting where Jews could live were declared illegal, the KKK was pretty much litigated out of existence, and Joe Lieberman came within five electoral votes of becoming America’s first Jewish vice president.


And then the unthinkable began to happen.

Over the last decade, there has been a noticeable uptick in anti-Semitic rhetoric and incidents by left-wing groups targeting Jewish students and Jewish organizations on American college campuses.

Jews in countries throughout Europe have been attacked by terrorists. And the re-emergence of the white nationalist movement in America, complete with Nazi slogans and imagery, has brought to mind the fascist displays of the 1930s.

Where is all this hatred coming from? Is there any significant difference between left-wing and right-wing antisemitism? What role has the anti-Zionist movement played?

And what can be done to combat this latest manifestation of an ancient hatred?

In a series of letters to an imagined college student and imagined colleague, both of whom are perplexed by this resurgence, Deborah Lipstadt gives us her own superbly reasoned, brilliantly argued, and sure-to-be-controversial responses to these troubling questions.

Professor Deborah Lipstadt has held the presidential appointment to the United States Holocaust Memorial Council, and represented President George W. Bush at the 60th anniversary of the liberation of Auschwitz.

Her books include The Eichmann Trial, Denial: Holocaust History on Trial (a National Jewish Book Award-winner), Denying the Holocaust: The Growing Assault on Truth and Memory, and Beyond Belief: The American Press and the Coming of the Holocaust, 1933-1945.

She is the Dorot Professor of Modern Jewish History and Holocaust Studies at Emory University, and lives in Atlanta.

This event is open seating, and advanced tickets ($18.00) are available online at https://www.brownpapertickets.com/event/4257168.