Dip Your Apple In The Honey: It's Rosh Hashanah! And, as we begin a New Year, please remember - as Rabbi Adam Rosenbaum of Synagogue Emanu-El in Charleston, South Carolina has taught us -

The Ein Prat Fountainheads have touched our hearts. Now, for our minds, here is a video by Abq Jew's Talmud teacher Rabbi Judith Hauptman that explores the origins of the Avinu Malkenu prayer.


A bit more about Rabbi Hauptman: 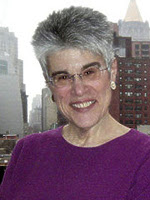 She grew up in the Brooklyn borough of New York City, New York, United States.

She earned her PhD in 1982, and was the first woman to earn a PhD in Talmud, which she earned from the Jewish Theological Seminary in New York. She also studied at Hebrew University in Jerusalem.

Hauptman was ordained as a rabbi in May 2003 by the Academy for Jewish Religion. She is the E. Billi Ivry Professor of Talmud and Rabbinics at the Jewish Theological Seminary and the Chair of the Department of Talmud and Rabbinics. She has taught at the Jewish Theological Seminary since 1973. [Rabbi Hauptman has recently retired.]