"Mr Jay" Bainbridge: Do you know "Mr Jay"? Well, Abq Jew didn't either, until he learned through the B'nai Israel grapevine that "Mr Jay" has been nominated for a national American Federation of Teachers (AFT) award.


"Mr Jay" is (among many other things) the Pre-K Lead Teacher at Congregation B'nai Israel's Pre-School. And one of only five nominees in the Early Childhood Educator division for the AFT Everyday Hero award.

Who among the nominees will win the award? First of all , "Mr Jay" and Abq Jew share the perspective of the Academy of Motion Picture Arts and Sciences:


It's an honor just to be nominated.

But back to the "winning" part. Voting is going on right now. And we all get to vote. The Award website tells us:

Read about fellow members who epitomize the spirit of public service, camaraderie and compassion, and inspire us all to reclaim the promise in our chosen fields and in our communities.

Then, vote for one Everyday Hero from each constituency group. Voting is open through May 29, 2016.

The finalist who gets the most votes in each division will be named his or her division’s 2016 Everyday Hero and will be honored at this year’s AFT convention. 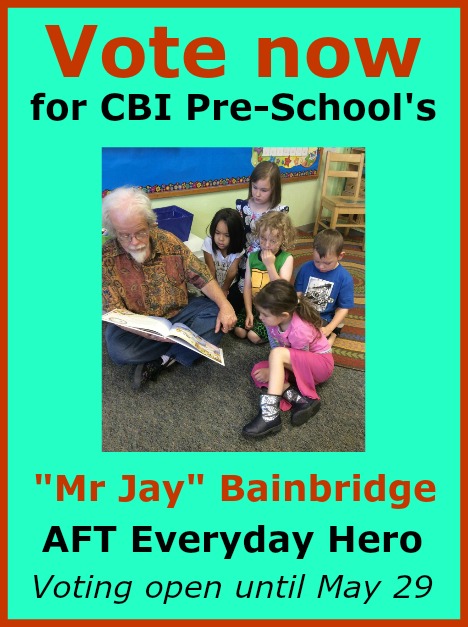 Here is what the AFT has to say about "Mr Jay":


Jay Bainbridge is not one to follow the beaten path. As a newly minted college graduate with a degree in art education, Bainbridge moved from the Midwest to New Mexico and took up work as a cook in an Albuquerque preschool. It was something that easily could have amounted to a temporary career move, but the energy that Bainbridge saw in the classrooms convinced him otherwise.

"It was the way the kids' eyes lit up, just because they were going to learn something new—and for them, everything was new," he remembers. There were very few men teaching early education at the time, but that was a nonissue. "I knew that I could give these children my best," he says.

Bainbridge was able to put his expertise to good use. He designed an age-appropriate arts curriculum that went beyond what he calls unimaginative, "let's make a fish, let's make a kitty" seatwork. In its place, he was able to sneak in a little "red week, blue week" color theory, and weave in trips to museums.

He showed up in class with posters from the masters, encouraging students to explore the art through questions for which "there is no wrong answer." Over the years, he says he's constantly refined the approach, balancing and rebalancing the ingredients of play and rich exposure that take his students beyond the ordinary.

And Bainbridge, who serves as New Mexico Early Educators United's vice president for political action, has proven to be just as courageous when it comes to advocating for the needs of kids and the rights of the profession.

You'll find him frequently roaming the corridors of the statehouse in Santa Fe, urging legislators to do the right thing and use available resources to improve early learning across the state.

"I have this scary superpower I didn't realize I had—I can talk with politicians," he says. "I look like this kindly, nice grandpa, and they don't see it coming. When it's about fighting for the rights of children, parents and teachers, I can get pretty feisty."

Click here to vote for "Mr Jay".
Voting closes at midnight on May 29. 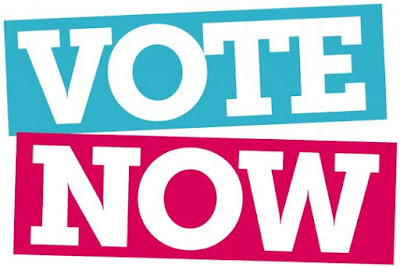