Why Is Tonight Funnier Than All Other Nights?

An Orange On The Seder Plate:  From setting crumbs on fire to the awkwardness of eating a matzoh-and-salami sandwich, illustrator Vanessa Davis recounts her family’s weird and wonderful Passover traditions in Tablet Magazine. 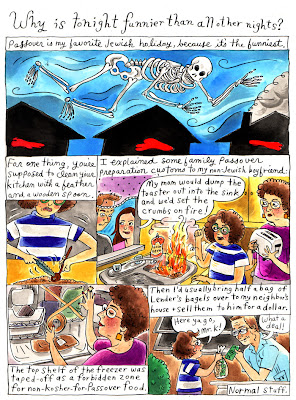 Why should there be an orange on the seder plate?  For a very good reason, Abq Jew thinks.  Elias Lieberman comments (again, in Tablet Magazine), citing Ritualwell.org as his source:

Heschel felt that to put bread on the seder plate would be to accept that Jewish lesbians and gay men violate Judaism like chametz violates Passover. So, at her next seder, she chose an orange as a symbol of inclusion of gays and lesbians and others who are marginalized within the Jewish community. She offered the orange as a symbol of the fruitfulness for all Jews when lesbians and gay men are contributing and active members of Jewish life. In addition, each orange segment had a few seeds that had to be spit out – a gesture of spitting out, repudiating the homophobia of Judaism.

While lecturing, Heschel often mentioned her custom as one of many feminist rituals that have been developed in the last twenty years. She writes, “Somehow, though, the typical patriarchal maneuver occurred: my idea of an orange and my intention of affirming lesbians and gay men were transformed. Now the story circulates that a MAN said to me that a woman belongs on the bimah as an orange on the seder plate. A woman’s words are attributed to a man, and the affirmation of lesbians and gay men is erased. Isn’t that precisely what’s happened over the centuries to women’s ideas?”

Yidden!  It's Pesach!  We're free!  Everyone to the table!