They Came To Serve

Proof They Were Here:  At last, the FBI has released a memo that proves, without any shred of doubt, that three circular spaceships, with three beings inside each, were indeed recovered in New Mexico in 1947. 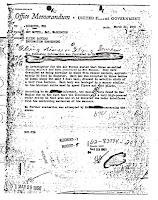 To view the memo:
Go to http://vault.fbi.gov;
click Unexplained Phenomenon
in the lower right;
then click Guy Hottel.
Here is what you'll see:


It is obvious to Abq Jew that these nine beings were, in fact, Jewish.

The first clue: there were nine of them.  To any Jew who frequents weekday religious services - whether to, alas, say Kaddish, or for spiritual fulfillment - it is as clear as a New Mexico sky (although today it's cloudy) that they were looking for a 10th being for a minyan.

The second clue: they traveled three to a spaceship.  To any Jew who eats at kosher restaurants - it is as clear as ... well, whatever ... that they always had a mezuman, so they could say a proper Birkat HaMazon (Grace After Meals) after eating.

The third clue, as if another were needed: they were dressed in "metallic cloth of a very fine texture." Mylar!  Everyone know that Jews travel with polyester.

Abq Jew felt compelled to write about this in order to dispel the rumors that have circulated from time to time about the ultimate intent of our heavenly visitors.

One particularly unfortunate rumor was portrayed in the Twilight Zone episode To Serve Man, which aired on March 2, 1962.  TwilightZone.org summarizes:


An alien race, the Kanamit, have come to earth. Mankind is overjoyed when they discover these visitors from another universe are well intentioned and kind. They provide great knowledge to cure disease, end war, and produce cheap power. After a meeting at the United Nations, a Kanamit accidentally leaves a book behind, and mankind seizes the opportunity to learn the Kanamit language. Michael Chambers, a U.S. decoding expert, immediately begins the long and laborious effort to translate the alien tongue. Countless hours later, Mr. Chambers is thrilled to discover the title of the book reads, "To Serve Man." The human race rejoices in the revelation that the Kanamits are here to serve them. Mr. Chambers, along with thousands of other humans, book trips to visit the Kanamit's home planet. Just as Mr. Chambers is about to board the ship, his assistant breaks through the crowd and begs him not to board. She has discovered the true intention of the book: It's a cookbook! Mr. Chambers is shoved onto the ship as the title, "To Serve Man" takes on a whole new meaning.

So let Abq Jew be, um, clear about this:  Kanamits are nine feet tall, and they eat human people.  Our New Mexico visitors were three feet tall (first generation immigrants!), they came looking for a minyan, and that's all we need to know.  It is not true that there was a fourth spaceship containing a synagogue that none of the nine would attend.