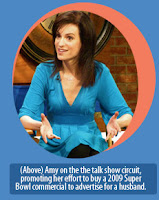 The Mother of All Comedy:  The latest issue of Hadassah Magazine has a Brief Review of Amy Borkowsky's new CD.  Hadassah's Susan Adler writes:


Mom and Dad, beware—your children are sharing your messages in weird ways. (Justin Halpern repackaged his father’s rants into a popular book and television show.) Amy Borkowsky has 10 years’ worth of her mother’s phone messages. The results are hilarious—and familiar—reminders about how to dress for the weather, upcoming birthdays, the single state, warnings not to get a cat, financial advice and the danger of kidney stones (www.mothercd.com).


Amy's wild ride from life as a typical single woman in New York City to becoming dubbed, "the comedian who's making a career out of listening to her mother" began when she started saving the tapes from her old dual-microcassette answering machine. As each tape filled up, she would toss it in a drawer, never imagining that someday the messages from her overprotective mom would lead to two "Amy's Answering Machine" CDs, this year's new release, "The Mother of All Comedy CDs," and an iPhone app called "Amy's Mom," now on iTunes.

This video will give you a taste of what's in store (literally) at Amy's website.  But even the examples ("Click to play actual messages") will have you ROFL.