The Jewish Daily Forward observed the 100th Anniversary here, and posted this video:

Elizabeth Swados, Cecilia Rubino, and Paula Finn have created their own memorial, From the Fire.

100 YEARS AGO, New York City experienced its most devastating workplace tragedy before 9/11. In the Triangle Shirtwaist Factory Fire, 146 immigrant girls, mostly Jewish and Italian, died trying to escape flames that roared through the upper floors of a garment factory near Washington Square. Trapped behind locked doors, many never had a chance to escape. Others jumped out the windows, some hand-in-hand, their hair and clothes aflame. The Triangle Fire became an unparalleled catalyst for social reform. Public outrage over the event galvanized the progressive movement, women’s suffrage, and instigated many of the reforms of The New Deal. The Centennial commemoration of the fire presents a unique opportunity for New Yorkers to honor those who lost their lives at Triangle and provides an important moment for the city and the country to reflect on the legacy of “The fire that changed America.”

From the Fire a new work created by the Tony nominated composer, Elizabeth Swados, writer/director, Cecilia Rubino, the poet, Paula Finn, and designed by Bonnie Roche-Bronfman, will dramatize the history of the Triangle Shirtwaist Fire and bring the event into the 21st century.

This dramatic oratorio/physical theater piece, sponsored by Eugene Lang College The New School for Liberal Arts, will be performed two blocks from the site of the fire at the historic Judson Memorial Church on Washington Square during the week of Triangle’s 100th Anniversary, March 23rd through March 27th, 2011. 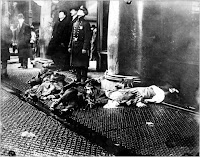 Abq Jew has walked past the Triangle site dozens of times.  Regardless of season, weather, or time of day, this is what he sees.
146 souls lost.  And the most terrible images of peacetime urban catastrophe until 9/11.
May their memories be for a blessing.