A Fight Song, A Love Song: Once upon a time, many years ago, Abq Jew attended Peterson High School in Sunnyvale, California, Home of the Pirates. During football season, he was a proud alto sax player in the Marching Band. And during basketball season, he was the proud leader of the Pep Band.

And Abq Jew was also the founder, leader, banjo player, and vocalist (no one else knew the lyrics) for the Motherhood and Apple Pie Skiffle Band. He was proud of that, too - we were "in demand" in the Bay Area folk music scene. Behind all that love for music was Mike Patterakis, the Music Director at Peterson High School in Sunnyvale, California. Abq Jew was far from the only student who felt that way. - just about everyone loved Mr Patterakis. (Everyone loved Mr Baer, too - see October 2017's A Paean to Mr Baer).

So. One day last week, as Abq Jew was doing ... research ... on the Web, he came across the following comment and question in his Peterson High School Facebook Group:

I was watching college football the other day, passively listening to a college marching band play their  fight song. It prompted the question,

“Where did the Peterson High School Fight Song come from?”

So, how about the Peterson Fight Song? Perhaps, some of our band alumni know the answer. The song itself has been rattling around, in my head.

The answer quickly came back:

Well. Of course he did. And Abq Jew added his memories to that simple statement:

Yes, Mr Patterakis wrote the fight song. I remember (I was in the band) discussing the chord progressions with him. I did make one suggestion for improvement [switching a dominant chord to a subdominant], which he agreed was musically correct. But he never changed it.

And, for the record, 'twas I who wrote the fanfare that introduced the marching band. Yes, Mr Patterakis was a great guy. One of a kind, of blessed memory.

I also remember creating a bluegrass banjo version of the fight song. Dear Lord, what memories. BTW, I'm Class of '68.

And then things got really interesting. Another of Mr Patterakis's more knowledgeable students wrote:

Mr Patterakis used the tune from a Greek folk song, and then wrote the words to fit. Here it is.

"Aha!" said Abq Jew. And did more Web research, then wrote back:

Wow! I never knew that! I went to your YouTube link and ... my God, this is (mostly) our fight song! Thank you for sharing this!

And here's another video, from world-famous Greek singer Nana Mouskouri, with lyrics:

As it turns out, Samiotissa is a traditional (Δημοτικό/Παραδοσιακό) song from Samos, one of the Aegean islands of Greece.

In the eastern Aegean Sea, Samos is separated from Turkey by the mile-wide Mycale Strait - thus making it the closest island to Turkey.

Samos was the birthplace of Mathematician Pythagoras and Philosopher Epicurus, and is known for producing world famous sweet Muscat wine. 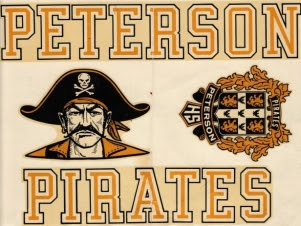 Manuel (Mike) Patterakis passed away on April 8, 2012 at the Garden City convalescent facility after a lengthy illness. He will be missed by loved ones and friends and is fondly remembered as a talented, thoughtful and caring man.

Born in Van Houten, New Mexico on August 19, 1933, he moved with his family from Hiawatha, Utah to Modesto in his youth and graduated from Modesto High School before going on to obtain a degree in music from San Jose State University. After two years of army service in Germany, he returned to become a music teacher in the San Jose area.

His life was marked by an abiding love and devotion to music beginning with participation in his church choir and local high school musical productions, followed by a career as a high school music teacher, and in retirement as a choral director of the Greek Orthodox Church in Stockton. He will be remembered by many in Modesto for his frequent appearances as emcee and singer at the annual food festival of the local Greek Orthodox Church.

As a teacher he made a real difference in many young lives, and a large number of his former students and faculty from Peterson High School in Sunnyvale, came to Modesto recently to honor him at a joyful and emotional reunion luncheon.

He is predeceased by father and mother, Gregory and Helen Patterakis, and sister and brother, Grace Capobianco and Col. Chris Patterakis. He is survived by sister-in-law and care-giver, Vicki Patterakis; nieces and nephew, Alicia Rodahaffer, Donna Martin, Patti Perea, Mark Patterakis and their children, godson, George Katsufrakis, and numerous cousins and aunts.

As mentioned above - on January 7, 2012, many of Mr Patterakis's students visited him - and sang with him. There are lots of videos and more on Facebook's Mike Patterakis Fan Page.

The video shown here (courtesy of Meg (Conly) Dondero, Class of '74), presents Mike Patterakis and his students singing the Marian A Peterson High School Alma Mater. Yes, Mr Patterakis wrote that, too. And this may be the only recording of the MAPHS Alma Mater on the Web.

The concept of simcha (happiness) is an important one in Jewish philosophy.

A popular teaching by Rabbi Nachman of Breslov, a 19th-century Chassidic Rabbi, is "Mitzvah Gedolah Le'hiyot Besimcha Tamid," it is a great mitzvah (commandment) to always be in a state of happiness.When a person is happy, he is much more capable of serving God and going about his daily activities than when depressed or upset.

Happy is how Abq Jew will always remember Mr Patterakis.
May his memory be for a blessing.